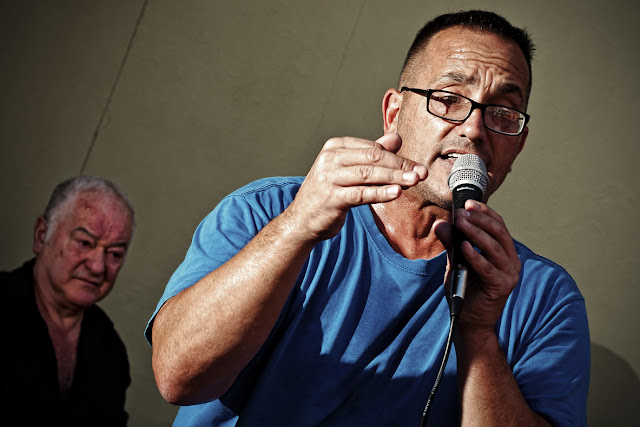 I'm super pumped to announce a couple of things today. All of them are pretty interrelated but significant to announce nonetheless.

Second and, well, just as important is the new blog design and address, blog.michaelanthonymurphy.com.

Lastly and, again, equally as important as the other two are your way to track me down. michael@michaelanthonymurphy.com and 267.481.4424, which are my email and phone number, respectively.

The production of the new campaign is currently in phase one and hopefully will be in its final phase in just a few weeks. Hopefully.


Going back about a year or so, I was of the camp, "my blog is enough."

You see, by that time, the blog had gained lots and lots of eyeballs. The days of 100 hits per month (I swear I don't care about stats) were long gone. My numbers were reaching around 5000 per month. In the grand scheme of things, this number is still small considering David Hobby's reach is somewhere in the hundreds of thousands. Yes, hundreds of thousands per month. He may have even hit the million mark, I'm not sure.  Anyway, as I come back from my typical digression, I was pleased with how the blog was reaching as many as it was. More than that, I was super happy that I could share with those thousands, my experiences behind the lens. Sharing with the world how I work with a camera, how I work with light, had become enormously fulfilling.

I had felt that with the blog's growing numbers, the client list would grow as well. And why not? Hell, Annie Leibovitz doesn't have a website or a blog! Strobist, David Hobby, puts most of his emphasis on the blog. So why then can't I survive solely on my informative, educational photography blog? Why? Because David Hobby is David Hobby, the Strobist (he doesn't like being called that), and he can stand alone with his blog being his number one marketing tool. As for Annie? Hell, she can do whatever she wants because she is just that effing good. Quick Experiment. Google Annie Leibovitz. Sure you'll see tons of her work but you won't find as much as a fart coming from her in regards to social media. She rocks so hard that she doesn't even have an assistant write in her name. Damn you Annie!

The point I'm making here is that I thought little ole me could ride the wave of my blog, land clients, grow, grow, grow. What happened? Before you jump to any negative conclusions, let me say the blogging platform is awesome. It has allowed me to, as I've already mentioned, share with the world and teach how to be a photographer, both technically and ethically. The platform has allowed me to not only educate but entertain as well. As for the clients? Yes, the blog absolutely and positively has helped increase business. I have landed some gigs that may have otherwise been impossible, to say the least. Had certain eyeballs never made it to certain postings that those eyeballs were interested in, the shoot would have been inconceivable.

BUT, the blog just wasn't enough.

To date, the blog's reach continues to increase but at slower rate than it did at its inception. So why on earth would I assume that clientele would skyrocket regardless of what the blog is doing. It wouldn't. Never ASSUME as it makes an ASS out of U and Me. I new better and I knew that it was time for a re branding of sorts. I needed to have a fresh new portfolio based website. The blog needed a new look. The logo needed to represent me, how I shoot, how I act, how I dress, every detail about me and how I work. Nike is a brand. Coca-Cola is a brand. Strobist is a brand. Annie Leibovitz is a brand. These are all very recognizable names and you can immediately visualize their brand and what they do. It was time that I did the same thing. I needed a solid brand. It was time for the whole package to be developed and delivered.

First order of business was to find a proper website platform. This proved more difficult than I had ever imagined. I initially wanted to have something that looked awesome for little or zero dollars. My friends, let me be the first to tell you that you get what you pay for. On the other hand, free can work in this department, if you know what the hell you are doing.

After searching provider after provider, I ended up going full circle. One of the first I looked into was Livebooks but didn't want to pay. Once I realized that the free or cheap ones didn't have the options I wanted, I ended up right back at Livebooks. Livebooks is made for photographers. Their design and function, The front and back ends, exactly what I was looking for. Livebooks handles SEO, client access, email management, hosting, you name it, it's there. Once I had signed up for the free trial, I knew that Livebooks would be the new home to my website, michaelanthonymurphy.com.

After decided and then ultimately designing the website, before going live, I had to nail down the site name. I immediately thought of the acronym, KISS or Keep It Simple Stupid. I didn't want to get crazy with a name so I simply went with my own, Michael Anthony Murphy. Clean, memorable, simple.

As for the blog, which since day one had been called speedlighter.blogspot.com, I had a couple reasons to change it up. First, I didn't realize that there was already a speedlighter out there, speedlighter.ca. Michael Willems, the original speedlighter, had the URL first. I didn't realize it until my blog was already up and running for a while. Once discovering Michael's site I felt horrible. I thought that he must have wanted my head served up to him on a platter. I tried not to think of it too often, that is until recently. Knowing I was going to make some changes I decided to contact the original speedlighter. I explained to Michael Willems that I had meant no harm when I began my blog, that it was totally coincidental and that I was finally changing things up. Nervously, I awaited his reply. Surprisingly, everything turned out to be awesome. Michael and I exchanged many emails and today I would even say we are buddies.

Finding a new blog design proved a bit more challenging than the website design. You see, any problems I have with the website, I can simply call Livebooks and bitch and moan until they fix the problem. As with the blog, I have to do more of the fixing on my own.

After days and days of searching, I finally found a design that was close to what I wanted. And that's all I needed, close. I'm no expert IT guy or anything but I have some chops when it comes to code and hacking, especially HTML. The design you are seeing today was from a template but then I added and removed some things, by editing the HTML, until it became my own.

The biggest additions I made to the blog are the links. Take a look above the image of the handsome guy carrying the camera gear. There you see links to different parts of the portfolio site and some links to social media outlets. Fun stuff.

I feel like I'm rambling on here a bit. The point of all this is two things. Get out there and bust your balls. You want to become a photographer, an designer, an e-commerce site, whatever. This shit's not going to happen for you. You need to get out there and get to work. Creating is only a small part of the process. Busting your balls is the name of the game. Don't wait for a handout because it ain't coming. I promise. Have a passion? Well, put down the effing remote control and do something about it!!!

The second thing is my big THANK YOU and welcome to anyone and everyone!