the internet :: then, now and going forward :: the social networking bubble 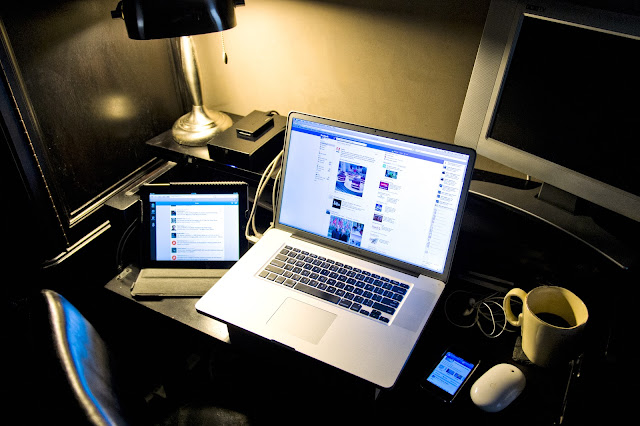 It was probably about five years ago, maybe more, maybe less, I can't quite remember, that I announced, with zero doubt in my mind, that I would never join facebook.

Conversations about facebook were spreading like AIDS in a condom-less whorehouse giving two for one deals. At the same time MySpace was spiraling downwards at an uncontrollable rate. I had since given up my MySpace account, accusing it of falling victim to the uncool of our virtual society. When great grandparents and toddlers began to have MySpace accounts, I thought it was time for me to jump ship. Facebook had slowly made its way into the mouths of the curious at this time of MySpace's demise. I couldn't be bothered. I thought it was simply MySpace all over again, only this time, slightly more annoying.

I resisted the new media platform with all of my might. And I wasn't resisting as a end consumer, a civilian, so to speak. I was resisting it as a business minded person. I couldn't understand how the masses put so much time into MySpace only to be swallowed up by its bubble burst. I wasn't about to put all of my eggs into this new basket. Sure it was free. It was tempting. Everyone was doing it. How could I not join this free platform and use as a marketing tool? Marketing geniuses all around tried to convince me that if I didn't join facebook, I'd be missing the bus, in a big way. I continued to stand my ground.

I didn't miss the bus. It wasn't long after my resisting that I finally gave in to the new media. Today, I'm not only on facebook but I'm also active on Twitter, Google +, Tumblr and this blog. I also have begun to dabble in Vimeo and Youtube, as I am beginning to produce different film/video formats. Do I think these social media platforms are the end all be all to internet marketing? Not a friggin' chance in hell. In fact, with the rate at which media and content are moving these days, I don't expect the big players such as facebook and Twitter to be the hotshots of the next decade. Hell, if I were Mark Zuckerberg, I'd already have my exit strategy and he probably does.

So why am I wasting my time on these platforms?

Let's go back to the pre-internet era. In fact, let's go way back, back to the days of, hmmm, how about pre plumbing? There are far more obvious metaphors to use but thought I'd get a bit more creative. A few hundred years ago, there were toilets but they didn't flush. People in large cities simply tossed their waste from their upstairs window, into the street. It was some lucky guy's job to come by and clean up the poop every night. How do you think the market is for that guy in today's society? Did I go a bit far there?

Lemme' bring it closer to home.

When I was young I was super lucky to get my first TV. I think it was a 12 inch screen, housed in a gigantic, ugly, plastic box. It had two frequencies, UHF and VHF (remember those?!). Even better, it was black and white. Oh, color TVs were more than plentiful in the world, it was just that if you wanted a cheap TV, you opted out of the color models. I was about 8 years old at the time. This was a television that I was able to keep in my bedroom. Trust me, even the crappy black and white TV was a luxury to have, especially in the South Philly neighborhood that I grew up in.

I'm getting off track here. The point of the black and white television is that at one time, that technology was awesome and people couldn't imagine anything more advanced. The ginormous tube television that weighed 9000 pounds was the epitome of the future. Brains back then could not fathom that we'd be watching TV today on screens that are less than an inch deep and weigh next to nothing.

As technology advances throughout the years, marketing follows the same trends, making use of these technological advances as a way to get their messages to the consumer.

For years and years, advertisers sought out space in magazines to promote their product. Sure, paper magazines still line shelves of bookstores but are quickly becoming more and more scarce as many have succumbed to the overpowering strength of the tablet (iPad, Kindle, laptop, whatever).

Without the money backed by advertisers, magazines are as good as garbage. Hey, a super rich oil tycoon may decide he likes a certain publication and donate a billion to keep a publication alive but fact of the matter is, paper magazines are on their way out the door. A decade ago, no one would have ever thought that this sort of culture shift would be possible. Ben Franklin would roll over in his grave.

If advertisers aren't buying up space in magazines then where are they going? Well, some are still hanging on to the old television commercials. God knows why. The last TV commercial I watched was, jeez, I can't remember. Hey, that's just me. I know there are plenty of people who still suffer through commercials, my bet, baby boomers. Women in their fifties glued to the Oprah network. Just my opinion, I could be wrong.

Have advertisers shifted to this Web 2.0 world, the world of social media, the new platform? By the way, it's all the same shit, Web 2.0, social media, don't be afraid of these super nerdy techy words. The answer is YES, YES and EFFING YES!

It's the world's largest cocktail party and everyone's invited. On September 14, 2012, facebook reached ONE BILLION USERS. That means that 1 out of 7 people on this planet are active on facebook. Those numbers are mind boggling. I'm thinking of standard bell curve with babies on one end and the less abled elderly on the other end. Everyone else, those 1 out of 7, are all checking in on facebook, minute after obsessive minute.

If you are an odd ball and not part of the largest cocktail party on the planet, well then, shame on you. More so if you are an entrepreneur, advertiser or salesperson of some sort, your ass NEEDS to sit down and join the party.

Want to hang on to your old ways? Go for it, nobody's stopping you. Remember the guy who walks the streets at night to pick up shit? Maybe you'll meet someone like him in line at the unemployment office.

Times change. Cultures shift. If you don't shift as well, your a sitting duck.

Is It Too Late?

No! Right now, I believe we are in the peak of this new economy. The bubble hasn't burst yet but it will. Mark my words.

I joined facebook a few years ago. Soon thereafter, I hopped on Twitter and recently I joined Tumblr and a few others. Do I enjoy sitting on six or seven different platforms, trying to be social at each and every one of these parties? Hell no. It's tough. Using social media platforms for purposes of growing business is very tricky. A delicate dance if you will. People these days are very smart. If you open a business, call it, Sam's Septic Services and you want to get your name known out there in the world's biggest cocktail party, you need to be nimble. If you just bang your brand down the consumer's throat, your company will quickly be recognized as being a spammer. In the older days of television, this was the only way to go. Brainwash the viewer until they buy your product. Today, in the new media, the consumer will smack you across your virtual face faster than you can blink.

Rather than spam, spam, spam, you need to join the discussions. Sam's Septic Services needs to start talking shit. And I mean that, literally. Sam needs to share with the world his fecal knowledge and help those who are not so poop savvy.

It wasn't long after joining these platforms that I began to see the ROI. I still remember the day that my facebook inbox had a message from a prospective client, interested in my work and wanted to further discuss. I knew then and there that this thing would be big. That if used properly, could grow businesses at rates that none would have ever thought possible.

Today, and I don't mean that figuratively, I mean actual today, I will at some point be hanging out on Tumblr, facebook, Twitter, possibly Behance and even Google +. I will not be begging the masses to hire me to shoot their next big campaign. I will be seeing what's going on. I will share some of my images. I will let the world know, I'm here. I'm active.

I'm not the poor old schmuck who still advertises in the Yellow Pages.

I mentioned earlier that this bubble will burst. Doubt me or don't but it is the way of the world. There soon will be another shift towards something currently unknown. Something we all will have the urge to resist at its inception.

What will you do then?

Are you going to hold on for dear life, to this thing that we all use today, fearing what the new thing will do for your tomorrow? I pity those who do.

Sharks die if they don't continue to move forward. Need I say more?