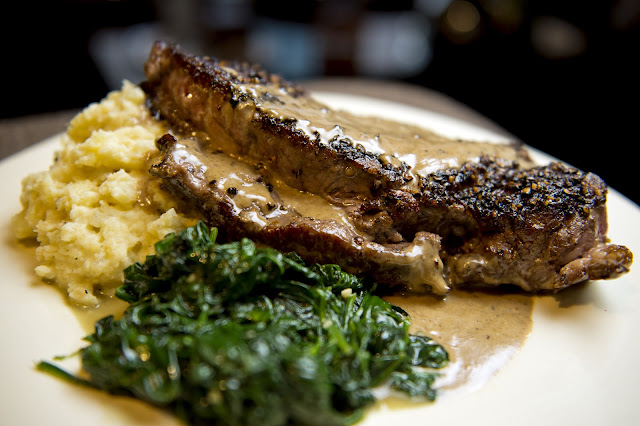 A new year is upon us. Did you stick to your resolutions throughout 2012 and into 2013 or did you buckle? The problem with many is that they set such unrealistic goals, goals that are clearly unobtainable. I'm not saying that you need to be an underachiever. Actually, I advocate quite the opposite. Reach for those goals but do it in a controlled and delicate manner. Personally, I like to take the Gary Vaynerchuk route. Gary, a monster in the business of branding and consulting, likes to advise people to "jab, jab, jab, jab" before landing the "hook." Makes a ton of sense if you think about it. By the way, be sure to check out Gary V. and look for some of his seminars. He's rough around the edges but he drops tons of knowledge bombs. Quite the motivator.

Where was I? Resolutions. Look, I know that mouth watering photograph is the pink elephant and you could give two shits about my thoughts on resolutions but trust me, I'll get to the photography stuff. Bear with me. And yes, the pink elephant, as I'm pounding the keys, is distracting me as well.
Here's my abridged version of my views on new year's resolutions. Wanna make them? Great. But don't use new year's as an excuse to make goals. If you want to reach or achieve a certain thing in the middle of the summer. Guess what? Just do it! As cliche as that sounds it is the only way to get anywhere in this world. Don't sit back and wait for new year's to begin your journey, your quest, for self improvement. You know why? You will never do it. Using a day like January 1st, to begin your journey is simply a way of procrastinating. Have a dream on June 9th, well, start working your way there on June 9th. Catch my drift? Eff January 1st! Start landing those jabs immediately. Don't dance around the ring waiting for the opportunity to land the big hook. It won't come. Jab, jab, jab. I digress.

So what is this vegan nightmare that lies herein? It is a photograph of the new year's eve dinner that my wonderful wife prepared last night, as we welcomed in 2013. I'm sure I've mentioned the wife's culinary skills once or twice before. If you don't know, now you do.

The sauce? I don't know but did see heavy cream and cognac being whipped together at some point.

The photograph? Let's get down to brass tacks before I stop typing and raid the fridge. 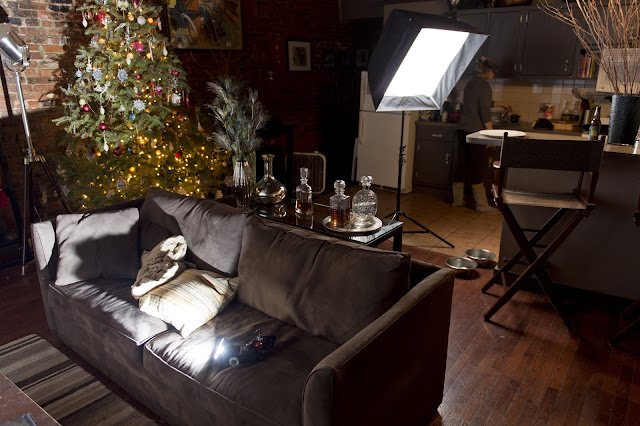 First of all, notice the textures going on. See how the meat is just jumping off of the screen, loaded with dimension? The spinach and potatoes also exhibiting signs of depth and dimension.

The peppercorns stand tall, as tiny as they actually are. Their presence made known.

Next, look at the cognac sauce, drizzled over the meat and onto the plate. Do you see the specular lights reflecting from the liquid? The sauteed spinach also has specularity due to the moisture from the olive oil coating the leaves.

Finally, take a look at the background, dark yet we see hints of bokeh, adding some more depth to the image in its entirety.

Now, let me ask you a rhetorical question. Do you think this was all an accident? Do you think I simply grabbed a snapshot of last night's dinner before shoveling the massive mound of meat into my belly? Well, first of all, that was a few rhetorical questions and second of all, you can obviously see that, with the multiple strobe setup, that these questions need no answering whatsoever, rhetorical or not.

The fact of the matter is, everything in the image was placed strategically for my specific wants and needs to create an image that makes the carnivorous weak in the knees while causing members of PETA to weep uncontrollably.

Let me take you on that journey from concept to completion.

I was not too far from home when I read the text from my wife. It mentioned dinner and steak au poivre. I had no idea what this was but was aware of the main and most important ingredient, steak. I couldn't wait to get home, not only to fill my empty stomach with the meat of the gods but to create an awesome image of the developing meal.

I immediately go to prep some gear, while at the same time, try to pre-visualize how I will want the image to look.

Before anything I go for my workhorse DSLR body and from there decide on which lens to work with. This choice gets a bit tricky. For these types of images I often like to use my Nikkor 50mm f/1.4G or Nikkor 85mm f/1.8G, due to the incredible amount of buttery bokeh that I am able to achieve. But, believe it or not, there is a reason that, of lately, for food photography, I've been staying away from those glass options.

Did I just blow your mind?

On to the lighting.

That day I was hoping to have had my new 60 inch Photek Softlighter delivered but it still hadn't arrived. For my main lighting modifier I went for the 28 inch Westcott Apollo softbox. I simply love the control of light I get with this mod, more than any other in my bag at this given point in time.

For actual light, I went with two Vivitar 285HV speedlights. Big and ugly but these babies are my goto's when it comes to lighting. They are not too pricey and yet quite powerful, the perfect combination for strobe happiness.

Without getting too technical (too late), I want to mention the support needed for the lighting. On a day to day basis, I use Calumet 10 foot light stands. These are excellent for their price point of about fifty bucks a pop. Don't forget to get the brolly adapters which will run about twenty bucks per unit.

On this particular shoot, I went with the two strobes but only one stand. The other lighting support is courtesy of Room and Board, where our couch was born. I know that lighting position has everyone a bit confused. No worries, I'll get to it.

Of course with these flash heads, there needs to be a way to trigger them. Can you say Pocketwizard? Yes, they are my pride and joy(s). The PW transceivers are, hands down, the most reliable triggers on the market. Pocketwizard puts out a premium product which is why they have been the industry standard for many years now. Cheap? Nope. But they are well worth the investment. Want to go Hong Kong brand? I promise you, you will get burned. Bottom line, you get what you pay for.

At this point, all gear is chosen and mentioned gear is moved out to the kitchen area to be set up and where I make careful decisions on placement of each strobe, minding the inverse law theorem, flash to subject distance, and other contributing factors that will affect the final image.

Once I've placed the lights in rough areas, I then work, sans strobe, to get an ambient light reading. I wanted a relatively shallow depth of field so I went with keeping the lens aperture wide open at f/2.8. From there I jump to the ISO, keeping it as low as I can to ensure a clean noiseless image. The D4 allows me to work at insanely high ISO levels while maintaining clean files. For this particular shoot I went with ISO 800. Finally, I chose a shutter of 1/80. These exposure choices got me an ambient that was underexposed by about three stops, bleeding in a tiny amount of available light.

With the exposure set it is just now time to add strobe. At this point the meal isn't ready but I need to get everything dialed in, in advance, because when that food is plated, I won't have much time to shoot until things begin to dry up. And if things dry up, they will look like do do on camera. Those speculars will quickly disappear and those juices won't look so juicy. So, how to remedy this? How to dial in exposure and lighting position before the food is served? I use a trick I learned from the Strobist king, David Hobby. instead of the actual food on the plate, I crumble up a wad of paper to plate instead. The ball of dead tree will have lots of creases and cracks, mimicking that of food's odd dimension. This will help give me a basis for the lighting positions, distances and power.

The key, the one modified by the Apollo, was set to 1/16 power, just enough to wrap the meal in a big beautiful light. I knew I wanted to light the food from multiple angles, so that I could find the most appealing positioning. With little time to work once the food would be plated, it would be tough to shoot, reposition, shoot, rinse and repeat. Remedy? VAL (voice activated lightstand). Stefanie offered her skilled VAL services after preparing the spectacular meal (what a trooper). With a VAL, I could direct and tweak until the right recipe of light is dialed in.

Time to explain the strobe on the sofa. The room is pretty dark. I thought different items to use for the background but nothing was blowing my skirt up. I even considered using the christmas tree as a backdrop. With the shallow DOF, it would just be a bunch of tree light bokeh but after a few tests, decided it didn't work so well with food, not steak anyway. Turning the camera around was fine but the dark background was a bit boring. I threw the bare strobe on the sofa, wide and at 1/4 power, allowing to bounce some light around the room and more specifically, through the decanters on the table behind the couch. The result is what you are seeing; soft, out of focus light. This would accent the background of the food just enough without drawing the viewer's attention away from the meal.

At 12:19 a.m. the food was plated. Wow, just realized we ate after midnight, so in actuality, it was our first meal of 2013. Had a few Rogue Dead Guy Ales, time must have gotten away from me a bit. Anyway, at that moment I began shooting. Stefanie moved held the stand with the Apollo and moved it strategically around the food until I found the exact light I wanted. As she moved the light, I altered my positioning while moving the plate around until finding the perfect shooting angle. It was a beautiful photographic dance. The amazing part? By approximately 12:23 a.m., shooting was complete. A good hour or so of prep and within five minutes I had enough shots. Remember, there was no time to waste as that sauce and those juices will dry up rather quickly.

I wish you all well in 2013. Get those cameras out, get those strobes out and get shooting!