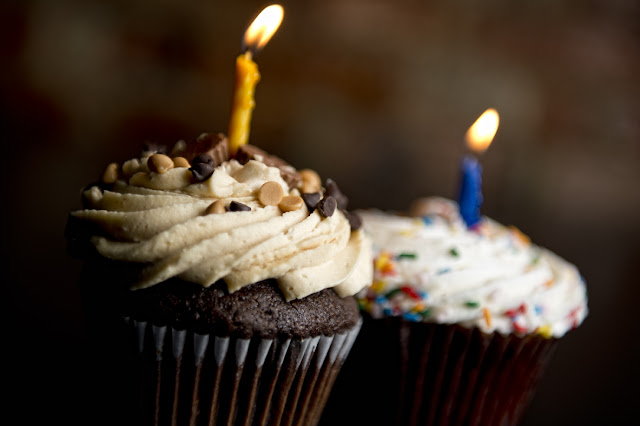 Hard to believe but it's true. Today, I'm sitting here writing my 100th blog post. Seems like just yesterday that I started this thing. On the other hand, it has also been a bumpy road along the way.

In actuality, my first post [here] was written on my wife's 29th birthday, July 15, 2010. Thinking back, I'm not sure how that flame arrived under my butt, compelling me to begin a blog. Whatever the urge was, I decided that I would do it, make the commitment to sharing my photography and photographic knowledge along the way. Little did I know how much this blog, this powerhouse of a social networking tool, would change my life.

Join with me, my little celebration of this benchmark.

I promise not to bore you with some sentimental, mushy, teary eyed flashback story. Hell, I may even keep today's post short and sweet. And speaking of sweet, those cupcakes look damn good and I'd rather be stuffing my face with one of those than be sitting here pounding away at the keyboard.

A Bumpy Road You Say?

Yes, the road to 100 hasn't been as smooth as one may think. There have been times I've just wanted to throw in my cards and call it quits. The first instance was when I ran into to some problems with Google. For those unaware of the blogosphere and what is made available to bloggers, one of them is a monetary incentive from Google, called Google AdSense, a pay per click program available to qualified bloggers to earn money via targeted advertising on their pages. For instance, the content here is mainly about photography. Google would then, through some genius algorithm, tailor the ads that I would place where I prefer, to be mainly of the photography genre. Ads could be anything from cameras to tripods, classes to lighting. It all depends on the exact content of that particular post. A reader may see an ad and decide to click it and go to whatever product is being sold. The publisher then earns each time somebody clicks to one of those ads, hence, pay per click.

I mentioned that qualified blogs were eligible for this type of advertising. Once discovered, I immediately applied for the program. I was soon thereafter denied, with Google stating that I didn't generate enough traffic to be part of the program. I was far from devastated as I knew I was a new blogger and was well aware of my low traffic. After a few months of consistent writing, I saw my stats improve dramatically. I then applied again with AdSense. To my surprise, I was accepted. I quickly placed ads in a few places around my pages. It wasn't long before I was earning money from my blog. I thought to myself, "This is effing awesome!" I was intrigued by the fact that I could make money from my blog. I investigated further and read many stories of people making six figures a year, simply by blogging a couple hours a week. I had the bug, I wanted to be a full time blogger. Then, out of nowhere, I was kicked out of the program for some inappropriate titling to a couple of posts. Google stated that "you content is dangerous to our advertisers." I was crushed. I quickly filed an appeal (still waiting on that response) and changed the inappropriate post titles.

I was so angry that I decided that I would no longer write or share my work on this type of platform. But then I thought deep and hard about the purpose of why I started this thing. It wasn't to make money. Hell, I didn't even think that was a possibility when I began blogging. I began this thing to share with the world, my experiences in the world of photography, whether it be a new technique I learned or a piece of gear I had just purchased. I just wanted to share with and educate as many people as I could. Money was not my motivator. As I was about to delete my account, I took a look at my stats from inception to that moment. The blog went from about 20 readers a month to hundreds of readers a day, thousands a month! People were reading what I had to say, they weren't coming by looking for ads for the latest greatest gear. That meant a great deal to me. I wasn't about to let the readers down out of a moment of anger and greed. I would continue to write and share my photography and all of the experiences behind it, purely for the love and passion of this craft, nothing more, nothing less.

The Good, The Bad, The Ugly

One hundred posts and guess what? I'm well aware that they all can't be winners. There have been some awesome, some funny, some sad and some down right awful.

Hmmm, thinking back, here are some of the ones that have consistently stood out in my head:

"suicide on the ben franklin bridge!!!" That post may be hands down, one of my favorite, based on the content of the story. It had so many twists and turns from beginning to end. The super cropped photo is nothing worthy of a gallery wall but speaks so loudly of the happenings from that day.

"the photo changed the world - my world anyway" Another that I love purely for the story. A must read on a rainy day.

"jury duty - your civic responsibility" This too, was, in my opinion, a fun piece of literary work. A study of my mind on a strange day.

As those were, from what I felt, strong writing pieces, these next few are the ones that I have a strong affection for the photographic work:

And sometimes, I just didn't have a damn thing in my head to write that day. Albeit I may have been tired, hungover, distracted or just simply not in the mood to write, my dedicated overpowered those feelings and I forced myself to produce something, anything, regardless if it may have ended up a disaster. Here are a few of those that I obviously had better days:

"preparing for a photo shoot"

Ok, so I was going through and found that I may have had a few really bad days at the MacBook Pro. I just had to stop myself as I was getting a bit upset with the failures that I have produced, whether it be photographically or literary. Ah, but that's the beauty of the blog. Over the last 100 posts I could document what I've done, learn from mistakes and improve going forward. The blog has been a tool that forces me to create new work to coincide with the discipline needed to share a new post on a weekly basis, no matter how much I may not want to write that day. One hand feeds the other.

When I have recently advised another photographer the power of a blog, I said this:


"the blog is a great way to force yourself to shoot more. i have disciplined myself to write a blog every week, for the most part anyway. that means that i need to have new work to share and that means i have to get off my ass and keep shooting so that i will always have content"

Again those words were taken directly from an email I sent out just last week. I truly believe in the power of the blog and appreciate the fact that I can share and educate others across the globe about my experiences in the world of photography.

Today is my 100th post, and more than anything, I'm here today because of you, the readers. I thank you dearly for stopping by. And fear not, there will be many many more to come.

I have a bit of a weakness for sweets. I'm lying, I have a weakness for good food in general. I emphasize good food since I'm no fan of eating fast food. It's been literally years since I've even entered a McDonalds or anything similar. The thought of that food just makes my stomach turn. Thankfully, I have a wife who loves to cook. And I don't mean throwing a chicken breast in the oven for dinner, topped with a pack of Lipton soup mix. I mean real deal gourmet dinners. As I have a passion for creating photos, she has an equal passion for creating gourmet dishes.

Today, I knew I needed a cake of some sort for the photo to celebrate the 100th post. The nearest market to my digs is one Rittenhouse Market, a store we frequent often for our culinary needs. Besides having nice, high end products lining the shelves, they also have a section of gourmet pastries. I knew they'd have just what I was looking for.

I entered the market this morning and like a glowing light, there they were, the mouth watering, jumbo sized, individually packaged, homemade cupcakes. These babies are big. They'd be perfect for today's photo shoot. At four bucks a pop, they had better be delicious.

Walking home, fighting the urge to taste the sweet treats, I contemplated the positioning and lighting of the cakes. I was excited to do this shoot, to say the least.

At home, I placed the cakes on a black table, positioned in front of the brick wall that would be out of focus as I wanted lots of bokeh in the final image.

To ensure a nice sharp product/food image, I pulled out the Feisol and strapped the D4 to the top. I decided on the 24-70 f/2.8 Nikon glass for its ability to focus in nice and tight, allowing me to fill the frame with the cupcakes.

Light would come from two sources, first being a bit of ambient (the candles) and the second being the key, a 285hv in the Apollo.

Before shooting with strobes, I had to get an ambient reading with the candles. With a shutter of 1/100, aperture of f/2.8 and ISO 100, I was able to get the flame nice and bright, without any other elements of the frame being exposed. I then added in the strobe at 1/4 power set on the 45s (45 degrees on the x-axis and 45 degrees on the y-axis, relative to the subject). Remember, shutter controls ambient and aperture controls flash. If needed I could adjust those on the fly, the shutter if I needed more or less candle light and the aperture if I needed to dial in the strobe in either direction. Once firing, I liked the results, tweaking would not be necessary. I could have brought in a fill on camera left but decided on the more dramatic style that I was getting.

Once those candles were lit, I began firing pretty quick as I didn't want the wax to melt onto the icing. Once that would drip all over, I'd have a hellish time trying to recompose the shot. Luckily, I was able to get the frames I liked before this tragedy would occur.

Over in the digital darkroom, minimal processing was done. I simply did some curves adjustments to taste and bumped the tonal contrast a bit to bring up the shadow detail, ever so slightly.

Well, there you have it, post 100 has come and gone. Again, I thank you, the readers, for making this possible. Now excuse me while I stuff two gigantic cupcakes down the gullet.