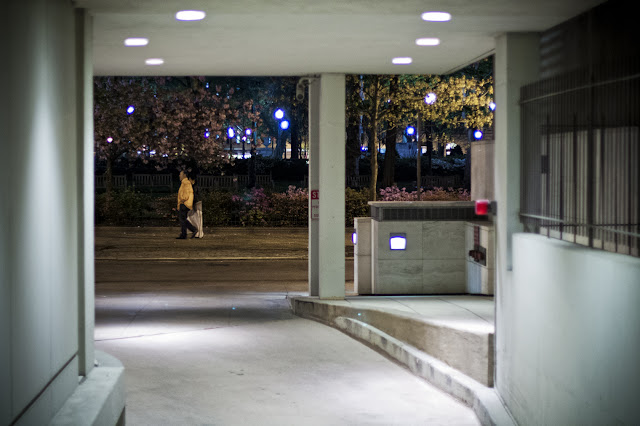 Before I begin yet another journey of photographic and journalistic exquisiteness, I must preface today's article with a bit of a personal catharsis.

Yesterday was a day that had my brain playing a tug of war with itself. It began like any other day. The wife and I had planned on visiting some family. On the way we made our usual stop for our daily dose of caffeine. From there we headed up I-95 to The Greater Northeast section of Philadelphia, where my aunt and uncle reside, just off of Cottman Avenue. There we visited Aunt Theresa, Uncle Jimmy and my mother, who was also visiting her sister and brother-in-law. Time spent for a visit such as this is never random. I stick to the four hour rule that the same aunt we were visiting had taught me some years ago. Seems to work well. For many people, it is hard to decide when is leaving a gathering too soon or too late. The four hour rule is the perfect formula of just the right amount of time well spent. Like clockwork, at the four hour mark, it was time to make the exit and head back downtown.

We arrived home around 7p.m. As usual, took the dog out for his early evening walk. By 8:00 I was comfy on the couch, ready for a night of pure nothingness. We had inherited a pizza from our earlier visit and that would be the evening's dinner. The wife was changing wardrobe as she was headed out for another gathering. I opted not to attend this one. She left home and headed out not long after I strategically positioned myself on the sofa, having optimal television viewing angles with perfect leg elevation and remote control placement. Ah, the perfect night. The Belgian ales were cold in the fridge and the pizza reheating in the oven at a low 200 degrees.

About an hour after my wife's departure, my iPhone had experienced a hurricane of incoming text messages. Other attendees of the gathering had been a bit upset that I was not there for the celebration. I fought the peer pressure with every ounce of my being. I was bombarded, text after text, friends relentlessly pounding me with messages of disgust and disappointment. Was I to disrupt my night of Utopian awesomeness?

The overwhelming guilt laid upon my shoulders had caused my will power to crumble like never before. The clock was rounding the ten o'clock mark, the time at which I typically would doze off on the couch with a pint of Ben and Jerry's slowly liquifying as it sits upon a slate coaster on the new coffee table. Unfortunately, on this day, I was getting out of my pajamas and into the clothes that I had worn earlier that afternoon.

Soon thereafter, I headed out the door, pounding the pavement, on my way to the venue of the celebration. I had never conceited to the text messages and my appearance was a surprise to all. Within no time at all, the sprits were flowing freely. Before I knew it and I knew it was coming, the tequila shots were lined up, room temperature and minus the training wheels (salt and limes are for rookies).

The debauchery continued along with the excessive consumption of an array of different drinks. Memories became foggy. My internal four hour meter was not functioning properly and I had no idea how long I had been there or when I was ready to leave.

I found myself riding shotgun in my friend's H2. I wasn't quite sure of the destination but I had a good guess. Turned out we were going to the driver's house, a condo on the river. Nice digs. If I'm not mistaken, when entering his home there were already women there, dancing on bar tops. A ten foot albino python was also in the room. A can of beer was tossed in my direction. At this point my motor skills were functioning well below the norm. The can flew right past my slowed reflexes. It wasn't long after that I had thought to myself; how the f&@k am I going to get home?

After helping my wife out of the oversized hot tub, we somehow made it home. Not sure who the driver was but a couple of partygoers ended up in my place. At this point, the four hour clock was spinning in every direction. Who knows what time it was or when the night would end? Responsibility was no longer a word in my vocabulary.

At some point or another, the night did end. I only know this due to the fact that I woke up this morning, sharing the bed with my wife and Bruno (our dog) and bit of a headache.

Could I postpone writing the blog? Could I wait until Monday? No. I couldn't let a night of childish behavior stop me from sharing my wealth of knowledge with the world. Ok, so from which I take that knowledge, my brain, may be a bit skewed today, I may have to keep things short and sweet.

To get the body kickstarted, the wife and I decided to have brunch, via Marathon On The Square. Eggs Benedict is my go to for days exactly like this. A large OJ, coffee and water along the side of the delicious meal would also help get the blood pumping.

So, without further ado, some actual photography discussion. At least an attempt anyway.

When I don't have any big projects in the making or just having some free time, for that matter, I always make some time to shoot. Continually making photographs is the only way to get better at this form of art. Check out [this] post to see how long it actually takes to become a professional photographer.

One of my favorite ways to practice my craft is to get out and do street photography. Walking the streets of downtown Philadelphia can land you some amazing opportunities to make spectacular photographs. Not only are the streets strewn with unique people but also with amazing architecture that dates from brand new to centuries old.

The other night I found myself walking down various alleyways, looking for "the shot." The temperature was in the fifties which made for excellent shooting conditions. Not only did the temperature make taking photographs easy but it also brought out lots and lots of people. Tourists and residents were everywhere, filling up trendy restaurants and sidewalks alike. It would be like shooting fish in a barrel (I think that's how the saying goes). 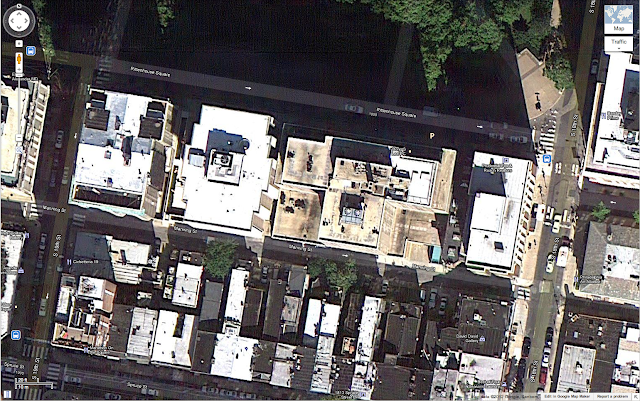 I found myself on Manning Street, between 18th and 19th, a small side street that lies between Rittenhouse and Spruce. The night was getting late and I had nailed a few cool street scenes. I was headed east on Manning towards 18th, my street, when I looked to my left. The lights were shining through the back of the hotel building. It was the backside of the building's garage entrance. Entry from the rear wasn't possible as it was covered in chain linked fencing. I walked up to get a closer look at this brightly lit structure. I was firing away all night, at my dinosaur's peak ISO of a noisy 1600. Seeing the light was like finding water while treading for hours on a dry overheated desert.

As I neared the fencing I could see what many could or would have missed. As others would see a concrete garage entrance, I saw photographic potential. The leading lines of this garage took my breath away. The sweeping curves of cement drawing the eye directly to the opening and on to the park. I had to shoot it. The fence would not stop a man on a mission.

I decided to get past the fence without actually having to trespass. The chain link openings were just wide enough to accommodate my 50 1.4 with the hood attached. Not only did this allow me to shoot through the fence but it also worked as a stabilizer. Saaweeet!

I took position so that I could have the entrance off center, abiding by the rule of thirds. The opening to the park, though, was missing something. That something was a main subject, a human or humans. The leading lines were beautiful on their own but better if they led to something. I decided to recompose and wait for random subjects to walk into frame. I took multiple shots of various people but decided on this couple for the working image.

There are lessons to be learned here, believe it or not. The image herein was a great street photography experience. Now, that will not be the last time I visit that exact location. I shot this with the oldest of my DSLR lineup. The resolution is not the greatest. I tend to take this specific camera out on later nights. I figure that if I'm held up at gunpoint, I won't put up too much of a fight for that specific camera body. The thief's camera phone probably makes higher quality images. Ok, not really but you get the point. I'm getting away from myself here. Caffeine must be wearing off. All thievery aside, discovering and doing a bit of street photography at this location has made me think to do an actual shoot at this awesome spot. In the future I will get some heavy duty strobe equipment in the garage and my ass shooting a model as fast as possible until security kicks me out. Bottom line is that I need to get back there and do some hardcore shooting.

If I feel good tonight, who knows, I may get out there again and discover another amazing spot. It's all about getting those feet going.

[Note: some names were omitted from this article to protect any and all guilty parties]