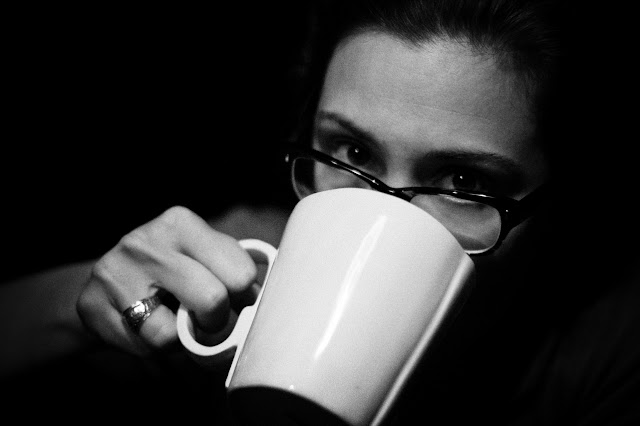 Ten thousand hours. That's what "they" say. To become and expert in any field, it takes 10,000 hours of applied practice in that particular discipline. Whether you are trying to be a lawyer, plumber or photographer, that is how much time, if you enter that field with zero practice hours, to make it to professional or expert status. Furthermore, it can be argued that whether the person has an aptitude for the discipline or not, makes no difference. 10,000 hours is all it takes.

On the other side of that fence is the argument that the ten thousand hour theory is bullshit since there are exceptions to this theory. This exception that I'm speaking of is born talent. How would one explain the person who enters into a field and does so with Doogie Howser like genius. Would that person discount the 10,000 hour thing altogether? To take the madness even further, some will argue that talent is not necessarily something that needs to be innate, that talent can be taught or learned. I don't want to make the discussion confusing, rather share my experience and come to your own conclusions, about me or yourself, for that matter. What has driven you to where you are today? Are you a pianist that can simply bang on the ivory without any thought processes or have you struggled, studying all hours into the night, drinking all the coffee in the world, trying to keep up with the pack?

more after the jump...


I'm not exactly sure what or when it was that I became so passionate for creating images. Throughout my younger years, I had always been advanced in the creative world. With a brush, pastel or pencil, I was able to kick ass when it came to making art. As for the photography thing, well, that memory is blurred with spots of random lucidity. Let's look into those rare lucid moments.

I had always been drawn to technology. My father always did and still does, stay on the up and up when it comes to technology and gadgetry. If it was the latest stereo equipment, car or camera, he had to have it. I'll never forget the day he came home with his first "high-end" camera. It was a Minolta disc-7. Released in 1983, the disc-7 Minolta's first disc film format camera. 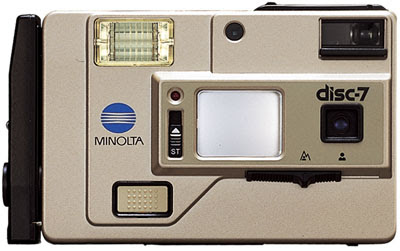 Boy did I think this thing was pretty. At that time it was. This was technology at its greatest. Things sure do move quickly. This pup could make nice 8x11 prints on that new film format. Hard to tell but see that rectangular thing in the center, it was a  mirror adjacent to the lens that assisted when doing those family photos. It was a wide angle mirror that would enable the group to compose the shot without the need of a photographer standing behind the camera. The black thing on the left was a built in tripod. A fully self sufficient camera. I had to be 6 or 7 years of age when he came home with that camera. I wanted to get my hands on it so badly. I'm not sure if he let me experiment with it on the first day but I do remember getting my hands on it on various occasions. Whether or not I was given permission from either my mother or father, well, that I don't remember.

Reverse or fast forward the clock a bit, not quite sure, and we soon arrive at my grandparent's house for a holiday dinner. It had to be Thanksgiving or Christmas. Whichever it was, required that one or more of the relatives be responsible for taking photos. It was on that day that I clearly remember my first experiences using a Polaroid camera. 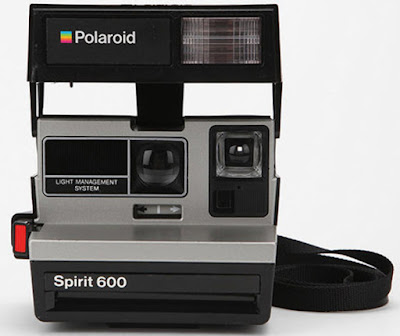 It was my Uncle Kevin's Polaroid 600. I'm not sure if this Spirit 600 is the exact model but for some reason when searching through various Polaroid history websites, I've been drawn to this image. I could be wrong but it was definitely a Polaroid 600 series camera. This camera needed to be in my hands, even more than the Minolta. Why? Instant gratification of course. Who could imagine, take the photo and the exposed film is spit right out the front of the monstrosity of a camera. Careful not to touch the film or the exposure could or would be destroyed. The secret was to shake the film after the shot. People, with or without proof, believed that this would speed up the exposure process.

I'd say this was my first big advertising shoot. I recall my uncle and his wife, my aunt, Laurie, sitting on the plastic covered couch as they posed for me. Kevin was holding in his hands a bottle of aerosol Binaca.  This was a disgusting breath freshener but he always had a bottle of that or Dentyne chewing gum on him, wherever he went. The image was less than professional. I was able to give the breath freshener priority in the composition but sliced one of there heads right down center. If my memory serves me correctly, I think it was my aunt's face that fell out of frame (promise I will post that photo if it is out there in the world. I will search for it).


It was around that time period when video became all the rage. Finally, enthusiasts could obtain a camcorder at a fairly decent price and a smaller size. Up until this time, most video recorders were very big and very pricey. The Zenith compact VHS camcorder changed the game in 1985. Instead of loading bulky VHS tapes, this camera used a scaled down version that saved up lots of space. After filming, you would simply add the small tape to a full size VHS adapter, pop in the VCR and enjoy the masterpiece that was just created.

My father, along with best friend and brother-in-law, Kevin, both ran out to get this revolutionary piece of technology. I, still wetting the bed, wanted to get my hands on this beast and A.S.A.P. My handling of this camera was limited due to its cost and fragility factors. I drooled over the thought of shooting actual video with that camera. It was super sleek. Nobody else's fathers had one of these. It was metallic grey and black. The Zenith logo sparkling on the side. Digital timers and an array of other buttons that I had no clue what they did but wanted to get pushing them as soon as possible.

It must have become apparent to my parents that I had an affinity for creating photographs, still and moving. In 1987 came my big film career breakthrough. It was on that year's Christmas that Santa brought me my first video camera. 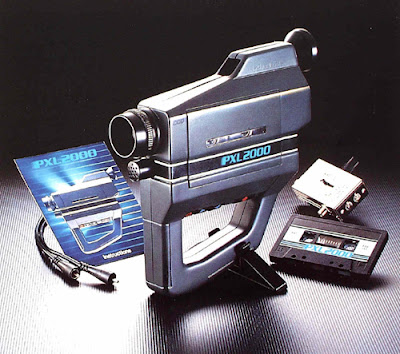 It was Fisher Price's PXL-2000. Damn was I pumped. Now I, Michael Murphy, would not borrow but own his very own video camera. Who was the coolest kid on the block? Yep, overnight rockstar status. Not only did I have an actual video camera but his thing recorded onto a cassette sized tape, smaller than the bulky recorders that our parents owned. Sure the image and audio quality was crap. Color was not an option. I didn't care, I was able to make my own short films, whenever I wanted to.


Time had past and life changed. A lot. Over the years I let my filmmaking curiosities fall wayside for the need to ride bikes, play sports and generally get into as much trouble as humanly possible. The PXL-2000 probably ended up in the trash. The videos made, well, who knows.

Maturing ever so slightly, I began focusing on academia and other "legitimate" things in life that would help me achieve certain goals. Image making was a distant thought.

I'm not quite sure how or why it happened. But it was on a birthday around the turn of the millennium that a girlfriend bought me my first digital camera. Thoughts of the old days were quickly rekindled. I held that camera with honor and pride, wanting to create spectacular images with this breathtaking technology. It was either a Canon or Sony Cyber-Shot, I'm not quite sure but leaning towards the Sony Cyber-Shot of the P series, having the signature rounded side. Whatever it was, it was a beauty. Unfortunately, I spent little time with this camera. It, among other things, disappeared in the breakup. Many of the items went un-missed but that camera, I spent nights weeping over its untimely departure.


I never went out to replace my first and last compact digicam. I had a new way to create awesome images with the baddest cell phone on the planet. The Motorola Razr. This cell phone was the hottest thing on the market. Sleek, slim and sexy, this phone was able to perform tasks like no other. If you owned one, you were part of the "in" crowd. Period. I was so excited to start making photos with this phone/camera. The image quality sucked but it was super accessible. I recall making some terrific photos with that gadget. Problem was, back then, I accidentally erased all of the photos from my hard drive. I did everything possible to retrieve them with no luck. I wasn't too upset except for the loss of one particular image. I photographed a homeless man sleeping on the street. The composition was superb. The image told such a story that it gave myself goosebumps. It was at that time that I wanted to make better and even more powerful images.


It wasn't too much longer after shooting with low standard camera phones that I invested in my first professional line of cameras. The DSLR changed my whole perspective. The technology was complex and this drove my curiosity. I devoured all of the information about photography that was possible. Books, websites, journals, magazines, you name it and I was reading it. I learned exposure and light at ludicrous speeds. My mind craved this information more than I could have ever imagined.

The images that I was able to capture with these cameras were like nothing I've seen before. The quality was second to none. I was hooked. An addiction like no other.

Today, I primarily shoot with my pro bodies. My tertiary camera, after the DSLRs, is my iPhone, which I usually use to shoot random snapshots or abstract styled, lower res photos.

I'm not sure how many hours I've spent over the years, making images. Is it possible that I've surpassed the 10,000 hour mark? I cannot honestly answer that. Has my image making process been a result of innate or learned talent? I don't know. What I do know is this: I don't try to answer those meaningless questions. I only try to go out and make interesting photographs. It's what I am passionate about. This post just happened to make me realize that I've been into this game much longer than I thought.

The point of this is simple. Do what you love. Don't give up. Keep shooting or fixing toilets for that matter. Whatever the dream is, don't do it half assed.