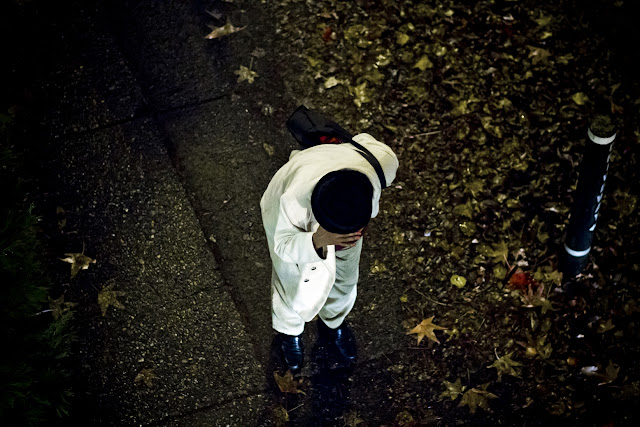 Take a look at the gentleman in this photograph. Can you decipher what is going on in the image? If you cannot, I am here to explain.

I captured this frame one fall evening while sipping on a glass of Orval Trappist Ale, a Belgian Ale produced in the monasteries of Trappist monks. Boy those monks make some wicked brews. Anyhow, I was on the balcony, of course having my camera ready to fire nearby, noticed this extremely interesting man doing some very unique things.

He was obviously not of a "normal" state of mental being. Wether he was mentally disabled, intoxicated or doped up on a Jeffrey, he definitely was drawing attention to himself. What captured my attention most was his attire.


At first glance I thought I was hallucinating from the strong Belgian brew. It was as if Alex and his droogs were headed down the street for "a little of the old ultraviolence." If you are lost, all apologies. What I'm speaking of and quoting are lines from one of Stanley Kubrick's all time greats, A Clockwork Orange. If you haven't seen this classic I recommend doing so as soon as possible. Along with the genius insanity that Kubrick fosters, pay close attention to how the film is shot, from a photographer's point of view. Many interesting angles and lenses chosen to shoot the masterpiece. Kubrick emphasizes the eccentricity of the characters using various point of viewed shooting positions, coupled with ultra wide angle lenses.

I digress. Anyway, this fellow's wardrobe was just about identical to the crazy characters of the Kubrick film.

Here's what I could only speculate that this man had going on in his mind at the specific moment of image capture. Take a very close look to where he is positioned on the sidewalk. Can you see it? His feet are placed just before the crack of the cement. He was rubbing his brow in utter frustration, trying to make the decision to cross the line.

I ran to grab the camera and compose the shot. I feared that I would miss it. As I returned to the edge of my balcony, sure enough, he was still poised before the line, trying to make what seemed to be such an enormous life decision. Seconds, which must have seemed like hours, pass as his tension begins to rise. I, on the other hand, got the shot and many more. At this point I just wanted to run down to street level and push his ass across the crack. Not sure how that would have turned out but I'm sure it would have been nothing less than chaotic.

A Nozh Scrap Anytime You Say.


What is the point of the anecdote that you've just read? Hmmm, I definitely spoke of this man for some reason to do with today's title of the post. More than an anecdote, I would say that the short story and title could be considered paradoxical in so many ways.

Don't let me confuse you. The man represents my mind and the line he is trying to cross is the dilemma of what my mind has been trying to fight and agree with at the same time, over and over again. The big principle of photography that we must abide that I often and never do. A "do as I say, not as I do," sort of principle. You all know it and I've preached it time and time again. Come on, say it with me, say it loud and say it proud, GEAR DOESN'T MATTER!

It may sound as if I took a large dose of LSD before writing this post but the sad truth of it is, I'm as sober as a judge. It just so happens that this is how my brain functions when I try to convince myself that the motto, gear doesn't matter, is tried and true. So why am I having such a difficult time swallowing that glass of Kool-Aid?


I can sometimes abide to the gear law when there are days I'm out and just want to make some awesome shots with my ghetto old iPhone 3G. It sports a sensor somewhere in the too-small-to-say megapixel range. Jeez, another word that causes so much conflict and controversy in the photographic community, megapixel. That word and the motto send chills up my spine as I try to cope with their true meanings. Regardless of the technology, or lack of, I have made and seen many spectacular photos made with far less advanced technology.

A point that should help me cross that crack on the sidewalk, along with other gear headed nerds such as myself, should be the lessons learned from some of the greats in the past. Think about it. Avedon and Adams were not consumed with the latest and greatest. Hell, the word megapixel didn't even exist when they were shooting. But I and other gear nerds are so consumed by the latest and greatest that it eventually interferes with the main goal, producing amazing photographs. This obsessive behavior just makes us stand at that crack, scratching our brows, refusing to make forward progress due to our insanity.

I've crossed that crack many times before, feeling the thrill of forward motion, moving on to the next step. Creating wonderful work with a bare minimum of gear, or newer gear for that matter. The problem I end up running into is that only a few feet away, comes another crack in the sidewalk. A never ending debate as to wether to cross or not to cross returns once again. Funny, the man in the photo is starting to seem a bit less insane that I had previously thought. Maybe he has it all figured out.

No Time For The Old In-Out, Love. I've Just Come To Read The Meter.


Over time I have come to realize that the motto can be true. That was until two weeks ago. After walking out of the Calumet store, my body was thrown back about thirty feet, ten cracks before the one I had so successfully made it to. It was time to pack up my archaic DSLR system, jump ship and purchase a whole new system. As I posted [here], I decided to exit the world of Canon and join the Nikon team. Yep, a whole new system. The D4 was ordered along with an agglomeration of new lenses.

Therein is where lies the problem. As I've once come to accept that I could produce excellent work with my old gear, I have now spun my brain out of control. The new system is due to arrive within the next couple of weeks. Like a child, I've been restless at nights, awaking from vivid dreams of my newest investment. Now, each time I attempt to shoot something new, I am reluctant to pull out my antiquated Canon body. Although I am very aware of the many images I have successfully produced with that body over the years, I cannot bring myself to shoot it with the same passion as I once did. Avedon and Adams would be so disappointed. Rather than pull my current pro line equipment from the bag, I punish and force myself to use even older and below par technology, shooting with nothing more than my iPhone 3G crap res camera. Sure, I pull off some great shots but in the last two weeks, my lighting equipment, the love of my bags, has been collecting dust. The strobes have been suffering abandonment due to their counterparts lack of use.

Here's the biggest part that I cannot figure out. I am here writing, consciously aware of my current mental state, yet I cannot bring myself to shoot with that old gear anymore. Strange but true. I sit and check my email minute after minute, waiting for Calumet to say that my package has arrived. I have convinced myself that it wouldn't hurt, a couple of weeks without "real" shooting. If someone were to tell me that same story, I would have told them what idiots they are and that they need to shoot daily to improve and become the best that they can be. Why can't I follow my own freakin' rules?

There's A Strange Fella Sittin' On The Sofa Munchy-Wunching Lomticks Of Toast.


I'm not too certain where this leaves us. I can wrap this post up, the self loathing, gear addicted intervention that I've written with the thought process of a paranoid schizophrenic and try to open my bag up and use the gear that has brought myself and others so much joy by the images that I have created with its help. Or, I can wrap up this article, pretend that camera will be a beast of burden and count the days until Calumet lets me know of the arrival of the new and super awesome Nikon system that I have longed for thus far.

Today is the 5th of February. The world is guessing that the new flagship should arrive in the United States on or around the 16th. That would be eleven more days of self deprivation. Could I endure or better yet, should I endure?

Avedon and Adams would probably smack me in the face for even considering waiting eleven long days.

I hope you enjoyed the insanity of me, Michael Anthony Murphy, and hope to see you next week. Be sure to stop by, the photo posted will tell the truth. If I have nothing new and something from the archives, I have ignored what I've been telling myself and others for years, GEAR DOESN'T MATTER!

Get out there and shoot. Do as I say, not as I do!

My Mind Is Blank. Uh, And I'll Smash Your Face For You, Yarblockos!