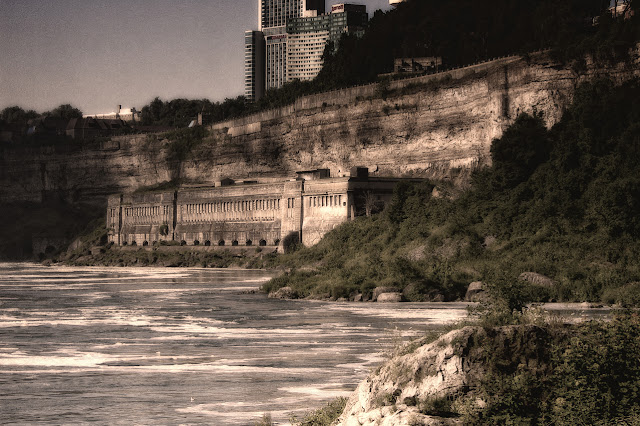 The clock is ticking. It is February 11th of 2012. It has now been three weeks since the big Nikon order. All signs point towards the new flagship to arrive in the states by the 16th. Five long, long days until there is even a chance of smelling my new system. Of course, with some bad luck, that gear probably will not arrive any earlier than March.

Here's the kicker. I've mentioned a week or so ago that it has been so difficult to pull out my jalopy gear knowing that the new animal is soon to be in my hands. Yeah, yeah, yeah, gear doesn't matter and all that jazz. I swear to you my fellow photographers, I've tried to overcome my outdatedgearaphobia but have had no such success. I was doing quite fine until I actually made the new purchase. Problem is, I've really been slacking off when it comes to shooting. Some street work here and there. I've even gone as far as holding off a client until March, knowing that I'd have the new system in place. I hope. Pathetic? Sure is.

That brings us to today's post. While I've been slacker number one in producing some new work (no worries, have plenty lined up), I have decided to dig through my archives to see what I've done in the recent past. By doing so I made some interesting discoveries.


Over the last year and a half, you can see throughout the blog that I tend to focus on portrait work or people photography, for the lack of a better term. This is not to say that I haven't explored other photographic endeavors with my cameras over the years. Shooting people just happened to become my passion. I love working with new people and learning of their lives and adventures. Aside from the passion of people photos, I became slightly obsessed with strobes, flashes, speedlights or whatever you want to call them. Off camera lighting added something to the photos that changed my world. Words cannot really describe but you just know it when you see it. It's a touch of love that ambient only photos just cannot produce. I knew from the first pop of an off camera flash, that shooting this way would be the road that I had to travel. The journey had begun. This is not to say that I don't stray away from time to time, shooting other styles of photography. If you are new to the art, photography has many different genres. With those genres usually have photographers that lean towards one or the other. It is rare that a pro people shooter will also try to make a living by shooting architecture and vice versa, real estate shooters rarely will try to focus on making an income from shooting fashion shots. Just the nature of the beast. But, as photographers, no matter what we focus on as our "style" of work, we can often venture to the other sides to expand our photographic abilities.

This brings us to what you are seeing here today. No, it is not a figment of your imagination. I have, from time to time, gone out with the gear and shot some landscape work. Today while digging through the infinite amount of photographs on the hard drive, I came across some landscape shots that really threw me for a loop. I could hardly believe that they were taken by yours truly. It's been some time since shooting any type of landscape. I had forgotten that some of the work I made was actually pretty cool.

North Of The Border 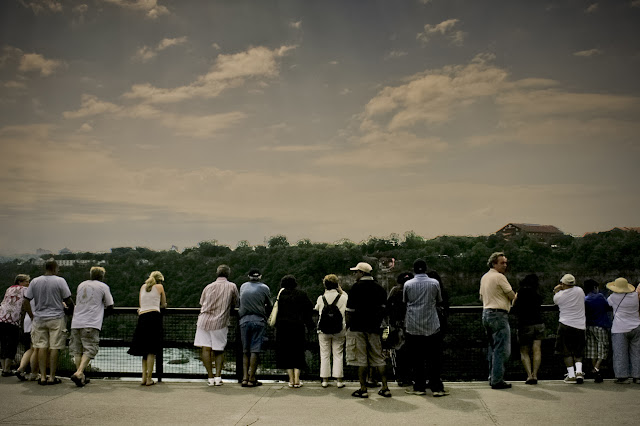 Back in 2008, the wife and I ventured up to Niagara Falls, the Canadian side of course. I recommend everyone to have Niagara on their bucket list. I'm sure everyone has seen images of mother nature's amazing creation in the land of Moosehead and free healthcare but images sometimes can't do this place the justice it deserves. Seeing the sheer power of the falls, in person, is simply mind blowing, to say the least. Its size and force are simply breathtaking. Being so close to the water makes you feel so small, so weak, compared to the millions of gallons of water flowing over the edge. Again, just something that you have got to see for yourself.

While in the land of milk and honey, I knew I was going to attempt to shoot landscapes, with my own twist of course. The sights of the falls can be amazing on print but I know of too many similar shots. I was out to get views of the land from new and unique angles. There is one obstacle, people. Yes, people, what I love to shoot on a daily basis, on that day would be nothing more than a problem for what I wanted to shoot. You see, along with the beauty of Niagara comes the countless numbers of tourists. Hell, I was one of them. Trying to avoid them in hopes of creating the perfect landscape was a challenge that I was up for. Look, I don't claim to be a David Nightingale by any means but I was confident to have enough chops to create awesome landscapes.

The key to this success was simple. Shoot. It doesn't get any easier than that. Throughout our entire stay, I made sure that at least one of my cameras was never left behind. For the trip I packed two cameras, one was the DSLR that I've been shooting before, then and ever since. The other was a slightly aged point and shoot.

The reason being for the point and shoot was, in my mind, justified. By the falls, there is and endless mist, a rain if you will, rising up from the falls due to the force of the water falling from above. This mist can and will wet you and your gear. I promise. Even if you think you are safe and dry, a gust of wind can redirect that mist right over your dry head. Basically there aren't too many safe spots to stand if you are shooting in close proximity. Now, the DSLR is rated to take a slight beating from water but I always did and always will keep that to a minimum, unless of course I'm shooting with a protective underwater housing. With that in mind, it was hard to see so many photographers with such expensive gear, have absolutely no regards for how much water was falling on their gear. Hey, maybe I'm just paranoid. So be it. 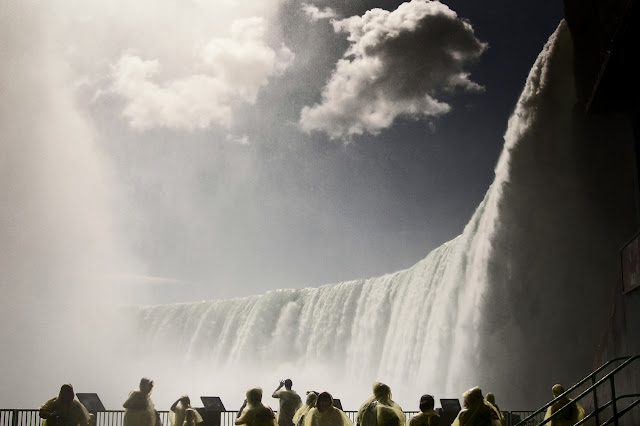 One key component that most landscape photographers will never shoot without is their tripod. Landscape shooters want nothing less than a perfectly sharp image. I, on the other hand, was not about to lug excessive amounts of gear day in and day out. I did pack the tripod for one reason, shooting the falls at night. During the day though, I was quite confident that I would be able to get a sharp enough image shooting handheld.

Even more, I kept the lens selection to one a day. Looking back, that was probably not the wisest of choices. At the time, I thought to myself that I would shoot each day with a specific lens for a specific look. If I noticed that there was a wider shot that I liked but did not have wide glass, I simply remembered the spot and on the following day returned to shoot at the wide angle. That day would then become the wide angle glass day. Again, looking back, that was probably not the smartest move I've ever made but it sure made sense at that time. My how we live and learn.

Not Only The Falls 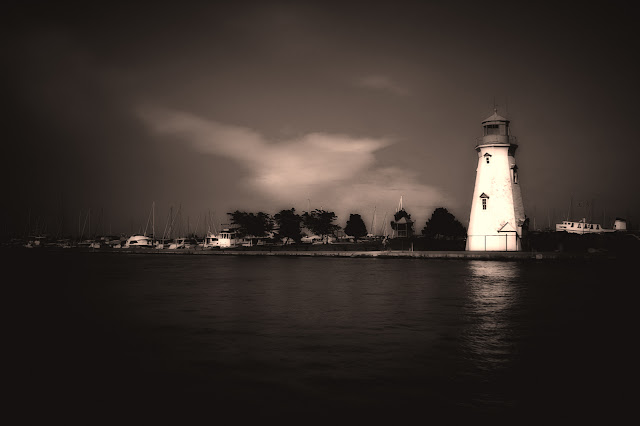 Besides shooting the actual falls, I decided to venture away from the roaring center of attention. Through her much appreciated research, my wife had a large itinerary for our extended stay in Canada. There was so much more to explore. One of our favorite towns was probably Niagara on the Lake. You can find this town by traveling down the Niagara River until you hit Lake Ontario. I think it was lake Ontario anyway. Boy do I look stupid if it was a different of the five Great Lakes.

Niagara on the Lake is a beautiful town. Lots of cafes, restaurants, vineyards, antique and specialty shops. Not a town you'd want to take the kids. They be utterly bored. This is a place for the adults to hang, chill out, eat, drink and enjoy life. By the way, I highly recommend an eatery that we tried called Murphy's Restaurant and Harbourfront Inn. Besides sharing my namesake, the place was fabulous. In actuality, it was located in St. Catherines, Ontario, another awesome town. Jeez, I love Canada.

As for the shooting, well, Lake Ontario (I hope) speaks for itself. The views are marvelous. Hard to believe it is just a lake when looking at it. It is similar to the days I stare out onto the Atlantic Ocean from the Jersey Shore. From the naked eye, they are seemingly the same size. Now that's one hell of a lake! 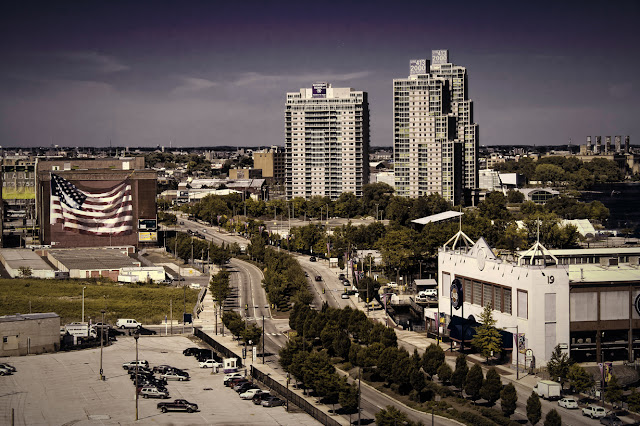 Ok, who the hell am I kidding? I'm sitting here trying to share with you the awesomeness of the landscapes I was able to shoot when I was in Canada. I'm sitting here, in Philly, mind you, trying to keep my mind off the fact that I'm not sitting here caressing my new Nikon system. I could blow smoke, you know where, all day long and type until my fingers go numb, about how landscapes have broadened my mind in the photography world. That is true and all that but the fact of the matter is that I simply did not have a new and awesome photo to post. Nope, I have collected yet another day of dust on my perfectly good gear, dreaming, hoping, that the email from Calumet would have arrived. The subject line saying something like, "Shipment Received."

Yes, I can shoot landscapes. I can shoot people. I can shoot buildings, architecture, dogs cats, nudity, pinups, headshots, editorial, advertising, abstract, underwater, in the clouds, on the moon, whatever. Give me a camera and I can create something pretty awesome. That is wherein lies the problem. My stubborn ass just hasn't done the most basic of rules, shoot.

I've never had this feeling before. I'm dying to shoot, so bad it hurts. Sure I've snapped a few frames of randomness since making the big order but nothing of commercial or monetary value. I feel like such a hypocrite. Preaching to the masses that gear doesn't matter, yet I sit here and pity myself that I can't shoot with the newest and best state of the art Nikon system available to date. Feel free to smack my in the head if you run into me within the next week or so.


An old friend and fellow photographer, Christopher Maxwell, has asked that, weather permitting, we go out on a team shoot tomorrow. I wanted to tell him no, so badly. I wanted to buy myself one more week, hoping the projected arrival date would be true. I couldn't share that insanity with Maxwell though. I decided to man up and book the date. If the shoot goes down, it could be a psychological breakthrough that has been much needed.

Four and a half days now, until the possible arrival.