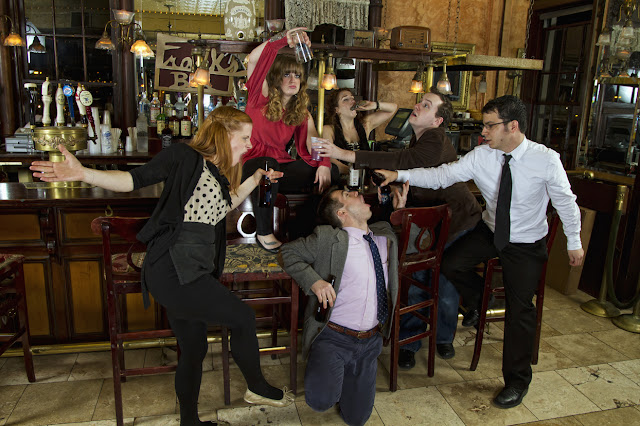 Strange days always seem to be a part of my life. Never do I expect the expected. Nor do I fight the urge to change the unchangeable. Many see me as laid back but this couldn't be further from the truth. Deep inside is a giant ball of stress, anticipating the next odd occurrence.

The latest of life's curve balls was nothing less than I would ever un-expect. Through a friend, Andy Moskowitz, I was given a bit of info that there is a play running in Center City Philadelphia and they were in need of some promotional/advertising work. I was given a contacts name and email address. Soon thereafter, I emailed the contact, Jordi Wallen, and explained that I could offer to her the services required. Along with the email, I sent a link to my online portfolio. Jordi replied and soon after we had a verbal agreement. Sweet!

So how could any of this go horribly wrong? Let me just say that it could have and almost did.

More after the [jump].


Ok, so we sealed the deal. Figures and concepts were getting nailed down and I decided to buy myself a bit of time.

The show is called "Bye Bye Liver." It has been an on going play for a number of years in various cities across the U.S.A. Recently, the show has debuted in Philly. It runs continuously every single weekend. It is a play about true American life, drinking, relationships and other debauchery that goes on in the bar scene, nationwide.

The hilarious comedy stars Jori Wallen, the bartender and the other hilarious cast members, Cait O'Driscoll, Joel Gleiser, Connor McAndrews, Avi Lasser, Joe Matyas, John C. Nagy III and Rachel Brodeur. Together they work magic on the stage. The show takes place in Downey's, a Philly landmark saloon. The drinking comedy is based mostly on improv, including audience participation. A nice alternative to the run-of-the-mill scripted shows.

I wrote that I wanted to buy myself a bit of time. Let me explain. As the show has no end in sight, I wanted to be sure the I had my new Nikon D4 system in place, to be sure I would kill the shoot in rock star fashion. Sure, I could pull off the shoot with my current equipment but I thought that if I had the time to wait, I'd knock their socks off with the first kid on the block shooting Nikon's newest flagship. When I asked Jordi if March would be an okay shooting time, she stated that it would be just fine. I was super happy. You see, at the time we made the agreement, I was expecting my new system to arrive mid to late February. Soon after the agreement, the bomb was dropped, The new D4 was to be delayed about a month. No worries, if the shoot date would come before the new system, I had options. First would be to use my perfectly adequate but aged system. Next would be to rent from my friends at Calumet. Another and final option would be to contact one of my partners in crime and fellow photographers Gregory Brown. We have, from time to time, bailed each other out of sticky situations.

At the time I discovered the delay of the D4, I was not worried as I had plenty of time to wait on the new system or nail down a back up plan. Smooth sailing so far.


It was Thursday night. I was home on the MacBook Pro, reading and watching various lighting tutorials as I usually do in high nerd fashion. Just before logging off, I notice a new email. It was from Jordi. She was super excited to inform me that the Philadelphia Inquirer wanted to do a writeup on the play. Besides the writeup, they also needed shots for the paper. I was beckoned to shoot just 48 hours later. My blood pressure immediately jumped from high to ludicrous. Mixed with the feelings of stress were that of excitement, of course. I knew the new Nikon D4 system would not arrive for this preliminary shoot so I needed to act fast. My first call was to Greg Brown. I explained to him what was going on. I told him that I could perform well with my dinosaur but at high ISOs, it would get a little noisy. I had a feeling that the venue would be dark and along with strobe power, I would need a body that would kick ass above ISO 200.

I awoke Friday morning with a new surprise, I felt as if I was hit by a Septa bus. My throat on fire with every bone in my body screaming with aches and pains. My head was filled with less than pleasantness. I could barely think of my name let alone stimulate the right brain to get the creative juices flowing. I dosed up on Day-Quil, Halls, TheraFlu, you name it and it was seeping through my veins. Every effort to clear my head for the next day's shoot.

Later that Friday, I arrived at Greg's abode and obtained my temporary donation, the 7d. I thanked him over and over. Timing couldn't have been more tight.

I got my butt home as soon as possible. I did a one over on my gear check and loaded up all of the appropriate chargers. I would have to hit the local pharmacy to grab extra batteries for emergency purposes. By mid afternoon after a bowl of chicken noodle soup, with tons of black pepper (my remedy for everything), I was crashed out on the couch. I was a physical disaster, needed all the rest I could before the following day's shoot. I'm not sure if I even ate anything that evening. I only remember ending up in bed long before my usual hour.

Saturday, I stayed in bed most of the day. I still had some equipment prep to do but I held off as long as possible. Rest was my best weapon for this shoot. I didn't know what else to do.

I had lined up a couple of assistants for the shoot since I felt that I would need all the help I could get. My head was a fog and didn't want to make any stupid mistakes. My main assistant would be Ellis Walding with co-assistant Mikey Douthwaite. Ellis is famous for his fashionably late arrivals. I had mentally prepared for that. I needed to be at Downey's by 6:45 p.m. 45 minutes before the scheduled shoot, to get a grasp on the lay of the land. Ellis called stating he would be able to make it to my digs closer to 7:00. Not going to fly. I decided to grab a cab and shoot over there on my own. Not the easiest of tasks considering the amount of gear I was hauling. The assistant team would just have to meet me there.

The weekend has been about as smooth as sandpaper and the shoot hasn't even begun.

Stay tuned. Part two soon to come. Part two will get real nerdy; all tech geeks like myself, be sure to see the BTS shots and technical nuts and bolts of how it went down.