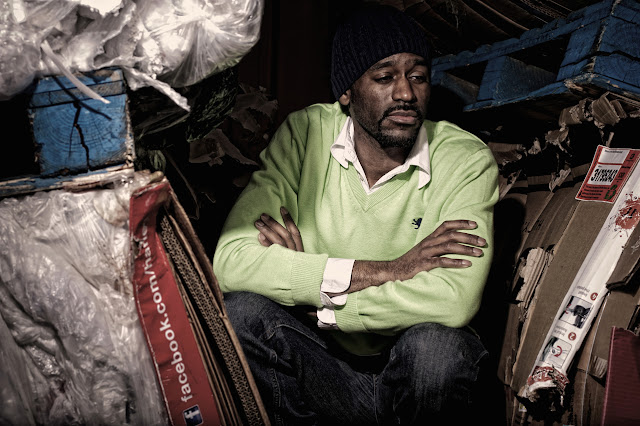 Last week's [post] has been getting tons of traffic and I have received lots of positive feedback. I first would like to thank everyone for their emails, comments, etc. Due to the overwhelming demand, I have decided to give the readers a quasi part two of last week's post.

So, without further ado...

"You'll be judged on what you succeed at. Not what you attempt."
-Arnold Rothstein (Boardwalk Empire quote)


I had a feeling that posting the shoot of Mike Gamble would have a solid impact on the blog. Today, I wanted to continue with more of the work that was produced but do so from a slightly different angle. You see, the shots I posted last week were not only some of my choice frames but Gamble's choices as well. He had chosen specific shots that would be beneficial to who Mike Gamble is and what he offers to the world. I, on the other hand, saw some other frames that stood out for other reasons. The photographs herein were, in my opinion, oddly captivating in some sense or another, regardless of how they may have had some compositional and/or technical blunders.


First, let me share with you, the readers, why I have chosen the opening photo of Mr. Gamble. That particular photograph was made during testing phases of the shoot. Let me elaborate.

I mentioned, in the first [post] of Mike, that we were shooting in a somewhat dangerous setting. In the shot of mention, Mikey was positioned awkwardly between mountains of garbage. There was little room for maneuverability and lots of room for disaster. Moreover, there was not ample room for equipment either. That's when I had to get creative.

The day of the shoot was extremely windy. We were close to the Delaware river and I think that had a role in helping stir up the chilly gusts. Trying to work with a 45 inch umbrella was a huge pain in the rear end.

My goal was to light Mike and the trash with just the right ratios of strobe. This proved difficult since he was squished between the piles of trash. Positioning of the strobes would either had to be very high to shoot down into the trash, lighting Mike and his surroundings. Another option would be to add some extra speedlights, positioning those in hard to reach places, adding rim light while illuminating some of the background. The former proved impossible since raising that brolly up too high wouldn't have been an intelligent decision since the garbage mound was added a slight block to the wind. Had I went over the pile, the brolly would have surely went airborne. The later would have to be the slightly more intelligent decision; adding more strobes.

I decided to place one brolly, slightly above and in front of the subject. I then decided to add one kicker, lying on trash at camera left. A third bare bulb would also be added slightly lower than the brolly, to illuminate some of the garbage and the lower parts of Mike's body.

While I was mulling over all of these decisions, Mikey looked as if he was in his own very deep thought process. Although I only had the one strobe powered up at that time, the brollied strobe, I knew I needed to start motor driving the camera.

Although not lit how I wanted it to be, I thought his expression was priceless. Remember, don't let good light ruin a photo. Yes, I wanted to have three strobes popping from every angle but when I saw an opportunity, I went for it. 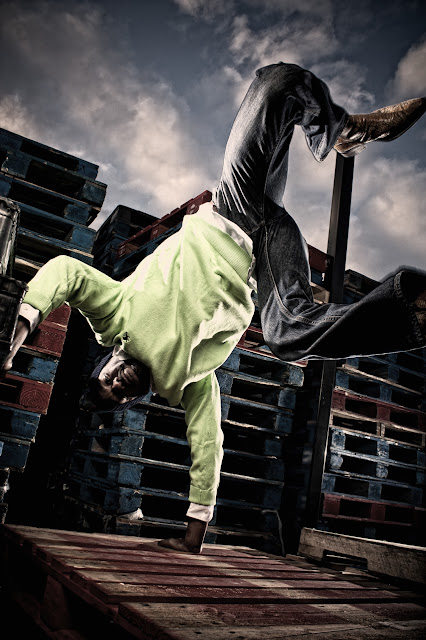 I'm not sure why I titled this post as "happy," because this second shot pisses me off to no end. This is the could've, would've and should've shot. The one with the potential to be a photographic masterpiece. The life changer. Rather, it fell short.

Regardless of my self loathing, I do think the photograph still rocks. Ok, so I'm a bit schizophrenic with my thoughts but if you've been a steady reader of this blog, that claim would not be too surprising.

Before I divulge the reasons I earned a whipping for this shot, take a look and closely study every element of the frame. With a keen understanding of composition, you should be able to find the answer rather quickly. If you are new to the photography game, this task may be a bit more challenging.

First, I will explain how I pulled it off, with a little more nerdy details than I had done last week.

The lighting setup was very important to make this shot possible. I had kickers lined up on either side of the subject. At far camera right, I had a Vivitar 285HV firing at full power. The nuclear strobe power was needed since that particular flash was so very far from the subject. Along with adding some right sided rim, that speedlight doubled to add some texture to the pallets. Take a look at the pallets at the lower right of the frame. You can really see the prominence of that strobe raking across the piles of wood.

I had a second Vivitar 285HV place at a closer proximity to camera left. That strobe was firing at half power, giving the same amount of rim as the far right strobe. Flash to subject distance working their magic there. Always keep in mind, The Inverse Square Law. If you don't know it, get to know it.

The fill coming from the front of Mike Gamble was coming in low firing into a Calumet 45 inch convertible umbrella. I placed it in low so that I would be able to get some fill on Mikey's face. He was pulling off some insane moves that proved very difficult to evenly light. I didn't mind as that made the project that much more challenging and exciting. Firing into that brolly was a Canon 430ex ii, at 1/2 power. Strapped to the front of the 430ex ii was a Rosco brand 1/4 CTO gel. Lately, I have just permanently kept the quarter CTO on that light. For portraiture, most of my work, it adds a nice amount of warmth to a subject's face, adding life to the image.

In camera, I went slightly over the recommended sync speed and decided upon a shutter of 1/250. The final aperture was at f/6.3. As for the ISO department, I went with the low, noise free, ISO 100. I'm back to shooting with my dinosaur so it's hard to get out of that ISO range without entering the city of noise town. The sun wasn't quite down at that time so manipulating the ambient with exposure at a low ISO was quite simple.

Almost forgot to mention. Yes, all strobes were fired via Pocketwizard wireless transceivers (I <3 you Pocketwizard!).

Ok, I'm done stalling. Can you see where I took a fatal nose dive while shooting this work of art? If you said that I failed by chopping off Mikey's foot, well, you'd be a winner. Now, on the other hand, if you said that I crashed and burned by including that metal post in the frame, you'd be a winner as well. If you noticed both foulups, well, you'd be the grand prize winner of a brand new...

Where was I? Oh yeah. I still think this shot rocks even though I broke some important compositional rules. Of course, I could have removed the post in post (couldn't help myself) but I've been trying to stick to my new year's resolution. I mentioned [here] that I have sworn off of going Photoshop crazy. I mention that I'm trying to stick with the resolutions.

Which Brings Us To 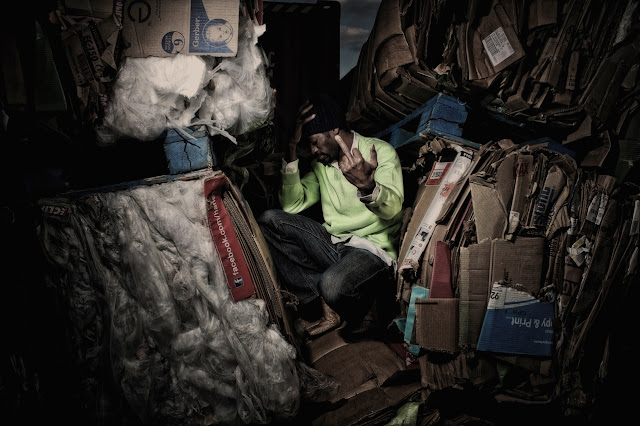 This shot was just fun for the sake of fun. You can see that I still didn't have a kicker hidden in the trash at this point. If I recall correctly, I was getting closer and closer to having it lit just right. The second bare strobe was in place getting the lower parts (Mikey's new snakeskin boots). The kicker was placed delicately on the rubbish shortly after taking this shot.

The texture of the trash was just fantastic. This just goes to show the extraordinary power of lighting off camera. Had this identical shot been taken with a point-and-shoot camera, utilizing the demon pop up flash, the results would have been horrendous. In hindsight, I wish I had a comparison shot to show how awful on camera flash really is. Anyways, that's not the reason I posted this awesome photo of Mike Gamble. Nope, the real reason. Drum roll please...

It has been less than ten days into the new year and I have already said a big "Screw You!" to my photo resolutions. I couldn't help myself. Here's what happened. I went so pure with Mikey's portraits that I was jonesing for some Photoshop. I mean, it was so friggin' hard to keep those portraits pure. The purity of them just caused me to relapse. Shortly after finishing up the originals, I dove into Bridge to find these photos to really tear into. I feel so guilty. Not really. Look, I just can't go cold turkey. I need to get my fix now and then.

In case you were wondering. Each of these photographs were given very similar treatments. All three were desaturated to some point. If I recall correctly, I believe I took it down about 50%. I also added some Tonal Contrast to bring out the details across the whole range of highlights, midtones and shadows.

Well, that's it for today. Be sure and tune in next time. It will rock, as usual. I hope.

Now, get out, get shooting and get lighting. Just get out there and do it.