photo (and other) resolutions for the new year 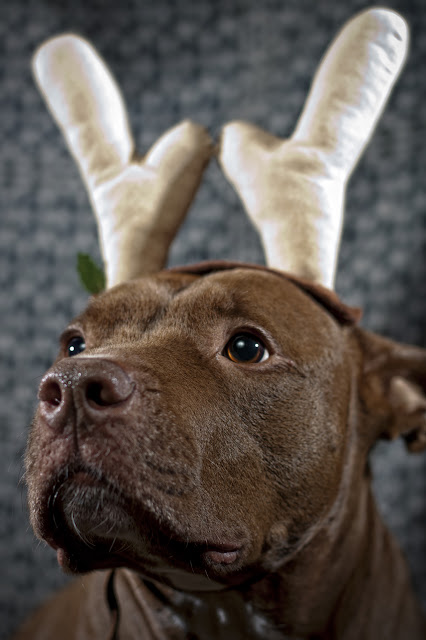 This week, I have decided to throw in a bonus post. Since the year is closing in and a new one is upon us, I thought it would be nice to share some more of my amazing thoughts and/or ideas, once more in 2011. Moreover, I'd like to share my photo resolutions for the new year.

Before I get started, yes, that is my dog, Bruno. And yes, he is wearing antlers. Torture, I know. Here's the quick lowdown on the photograph before I confess my deepest darkest photo secrets of 2011. My wife had asked if I would take a photo of Bruno, our loving Pit bull, wearing the holiday reindeer antlers. I explained that the project would probably be an uber pain in my rear end so I declined the proposition.

The wife was out for the day and I decided I needed to do some testing of my newest modifier, the Calumet 60 inch convertible brolly. Since its purchase, I haven't really given it any proper shoot time. I thought to myself that the pup could make for an excellent subject, as he has done for me in the past. Times have changed my friend, times have changed.

Little Bruno isn't as easy to work with as he once was. Imagine this setup. Yours truly, working solo, no assistants, no VALs, just me and Bruno. I set up two bare strobes and a third to fire into the humongous area of the 60 inch beast. Now, mind you, I must get the dog into position, hold the position while I tweak my exposures, lights, etc. Easy? Not a chance in hell. I was feeding him cheddar cheese as incentive to sit his ass in the proper position. The cheese was held with my left hand and in my right was my DSLR, trying to work that thing like a one handed MacGyver defusing a 20 ton atomic bomb with three seconds left on the timer. Needless to say, I took as many shots as I could until wanting to shove that 60 inch umbrella up where Bruno's sun don't shine. I wrapped the impromptu shoot in the matter of minutes. Found one workable frame, the one you see, and garbaged the rest.

Now, without further ado, my photographic resolutions for 2012. Drum roll please (that phrase always reminds me of Will Smith's D.J. Jazzy Jeff and The Fresh Prince's, Summertime, just does, what can I say?)

10. Not to light for the sake of lighting. I love trying to control the ambient with my strobes. Sometimes, though, they are just not needed. Sometimes the ambient is just [right]. David Hobby said it best, "don't let light ruin a good photo."

9. I once fell victim to the lure of HDR. It took some time but I fought her off. Her evil sister has entered my world and I vow to get her under control. Her name? Tonal Contrast, part of the Nik Color Efex Pro plugin suite. Moderation is the key to post processing happiness.

8. No more over lighting. Just as lighting for the sake of lighting can be a horrible addiction, so can be over lighting. Zack Arias has a whole friggin' workshop on using one light. Crap! It's even called OneLight! I have such an urge to pull out every strobe packed in my back, much too often.

7. The term 'do as I say not as I do,' rings a bell here. I preach so often, as most photographers do, that gear doesn't matter. I must confess and vow to swear off, the need for gear. I'm as guilty as the next guy. I am on different websites and Youtube looking for the next best piece of equipment for my bag. Wether it be a lens, mod or whatever, I'm always looking for new toys. I will repeat to myself as necessary, gear doesn't matter!

6. Not to be my own worst critic. This is probably a problem of every creative out there. 'Nuff said.

5. A bit off topic but it has been bothering me for some time. Not to eat scrapple for the sake of eating scrapple. I'm a Philly boy and was brought up on the stuff. Healthy? I don't even think the color is healthy. I love the stuff but it is just not good for me or anyone for that matter. I'll think of it like this, the more scrapple I eat in the new year, the less I will be able to shoot from awkward positions due to the obtrusive growth between by waist and chest, my belly!

4. I vow to not sit idly as I dream of the good gigs to fall into my lap. To get the good gigs, you have to chase them down. I have, from time to time, fall victim to this mentality.

3. I promise not to be stuck at ISO 100. This one causes a conflict with #7, gear doesn't matter. I have often feared of the noise that would occur with my antiquated camera if I pass certain ISO thresholds. A DSLR update is long overdue for me, an update that will allow me to explore insanely high ISOs. Once that final piece of gear is in my hands, well, look out. I'm such a hypocrite.

2. I will not mock or ridicule the point-and-shooters. Too often have I criticized, mentally anyway, those who are trying to explore their creativity. I will praise them for I was once there too.

1. I will stop lying to myself. Take this top ten list for instance. I know as well as anyone that within a week of the new year, I will most likely break some, if not all, resolutions on this list.