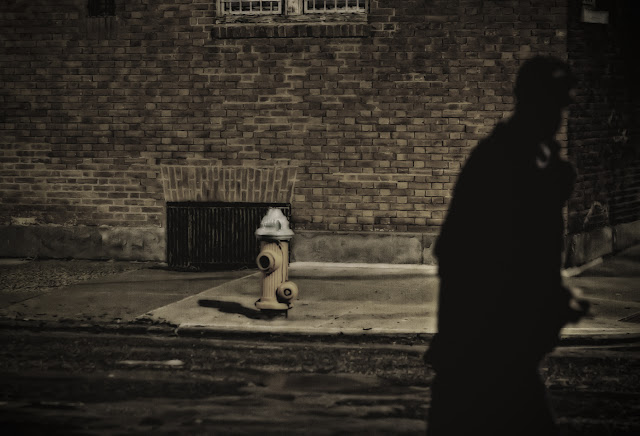 At the moment I have two favorite television series that I watch on a regular basis. First is HBO's Boardwalk Empire. A story of prohibition in Atlantic City. To sum it up, Boardwalk Empire is freaking awesome. Period. The other, that has been around for quite a while now is Showtime's Dexter. Dexter is quite the unique show. The lead character of the show, Dexter Morgan, is a forensic detective, more specifically, a blood spatter expert. Dexter works for the Miami Metro Police Department. The interesting twist on the program is that aside from Dexter's day job, he twilights as a serial killer. If you haven't watched, I highly recommend that you find season one somewhere online and give it a shot.

What does this have to do with anything today? You'll just have to endure the rest of the post to find out.


So what is this dark passenger that I speak of in the title? In the series, Dexter Morgan often speaks of his dark passenger. For him, this is the evil that lurks inside of his being. Something that often causes him much anger and grief, while he embraces this dark passenger on other occasions. It's part of who he is and over time he sometimes has come to terms with this darkness living within. Rather than fight it, Dexter has learned to cope with it.

Photographer's, and other creatives, also carry along with them, a dark passenger. It's not like the one Dexter carries. Not in my case anyway. I can't speak for everyone out there. The one I speak of in the creative world usually sneaks up at the most unsuspecting of times. This is not my psychological exploration of my deep subconscious or anything like that. Photographers and other creatives alike know exactly what I'm talking about. The dark passenger in our world is that specific moment when we hit a creative wall, metaphorically speaking of course. It happen's to every one of us. For a while you are on a roll, creatively, and out of nowhere, you get smacked right in the face with your dark passenger's right hook. The result? Nothingness. You try to fight it but that only seems to make the situation worse. Your right brain is running on empty. Not an interesting thought in there. Your emotions run wild trying to figure out how to get some ideas flowing again. You then begin to downward spiral until you become depressed, yet accepting, of the horrible situation. You wonder when, if ever, your creativeness will return.


Until recently, I was running a pretty decent creative streak. Had some awesome gigs lined up and plenty of ideas to go with them. Work was steady. Shoots were successful. I was feeling unstoppable. I was even getting a bit cocky. I was shooting in ways I never have before. Many times I tend to play it safe. Not lately. Oh no, I was breaking rules all around. I began lighting things as I would never have dared to do in the past. Trust me, you've seen the work too. I was double gelling, ditching modifiers, bumping up ISOs past my safe zones, you name it and I probably did it, everything that I normally would never do. The results were spectacular. I felt I had reached a new plateau, a new level that I've been striving to get to for quite some time. Risk taking was the ticket to this new success.

So, when did my dark passenger sneak up on me? Lemme back track a bit to share the recipe for my creative demise.

It was a couple months back when I booked some very interesting gigs. I was super excited to get to work. I had just about everything I needed to pull off some mind blowing work. A few odds and ends had to be purchased but they always do. Some expenses are not avoidable.

Something I did want to use was a different DSLR. I've mentioned many times before that both of my cameras are starting to see their age. This is not to say that they are not adequate for work, it's just that I'm so comfortable with them that I am very aware of their limitations. I've learned to circumvent those limitations by finding alternate routes to achieving the desired end result.

Recently, I have decided to purchase the new Canon 1d X (yep, my dreams of the 5d mark iii are no longer, I'm going with Canon's newest flagship DSLR. Go big or go home, right?). Problem with my new investment is that Canon's newest bad boy on the block won't ship until March of the new year.

So, what are my options? I could just say screw it and use the bodies I already own. That would be fine but as I mentioned, I wanted to use something a bit more versatile.

Another option would be to grab something from a rental house. Problem there is they typically want your first born child as collateral. I didn't want to go that route.

I decided to call a colleague and close friend of mine, Gregory Brown. Greg is a Philadelphia based event photographer. Greg and I have always had a great relationship. Boy, we could talk shop hours on end. Conversation that would make many people's ears bleed. I asked, with much hesitation, if Greg wouldn't mind letting me borrow his 7d for some of the upcoming gigs. I say with hesitation for the simple fact that photographers are typically married to their gear. And most people do not like to share their spouses. Hell, I don't even let my wife within a certain radius of my gear let alone touch any of it. Asking Greg to borrow his gear was very ballsy on my part. He explained, as expected, that he'd rather give me naked photos of his woman, along with her phone number, than give me the 7d to borrow. He followed his smart remarks by asking me when I needed the camera. I was floored, to say the least. A better man than me, I must admit.

We eventually met, I obtained the camera and quickly got home to familiarize myself with its functions and abilities.

The shoots came and went. Clients were very happy with what I had produced. I called Greg and told him that I was ready to return the camera. I knew it would be difficult to let it go but it was inevitable. I kept telling myself that it wouldn't be long until I had my new 1d X. March wasn't too far away. I also repeated the photographer's mantra, "gear doesn't matter." I thought that would help me return to my antiquated bodies with the same love I had for them as the day I bought them. Unfortunately, there was no such luck. I now wanted my new body more than ever. I began to Google the 1d X with obsessive tendencies.

It must have been a combination of the separation anxiety that occurred from departing with the 7d and the wrapping up of the year's final projects, that the dark passenger decided to make his appearance. 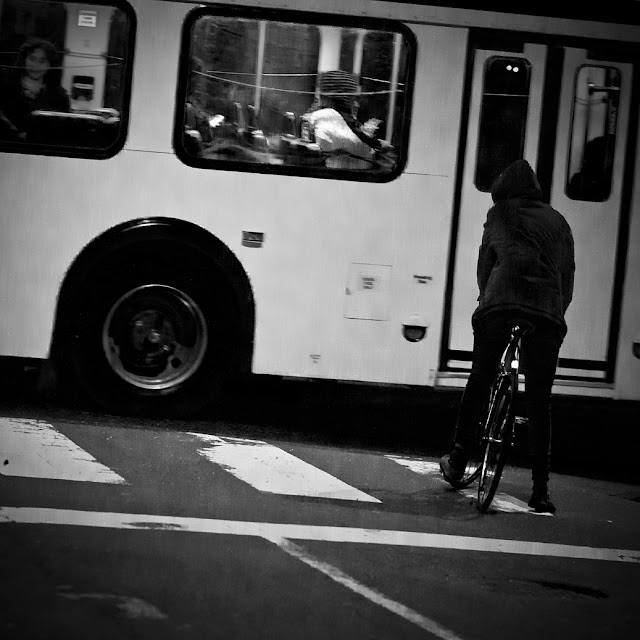 Like the photo shows, the dark passenger hit me as if I broadsided a Septa bus. A little corny but I felt that it was fitting for the article. That's not me in the photo either, in case you were wondering. That is just some random person who we will represent yours truly for the sake of the article's continuity.

Anyways, the combination of events had caused the dark passenger to arrive. I hypothesize that's how it happened anyway.

Gigs are lined up for the new year and the new camera in only a short time away. So why this feeling of creative nothingness? Holiday's are upon us and the new year isn't far away. The gigs I have lined up are pretty cool. But this feeling of creative emptiness just won't go away. Every time I pick up my camera, my mind goes blank. The most interesting thing I could do in the last few days was to shoot the ingredients that my wife had lined up on the counter for the baking of Christmas cookies.

Interesting? Hardly, but I am trying to fight off the dark passenger. The only way to get him out of the way is to keep on doing what it is that I do, shoot. I cannot say that it has been easy but I'm doing my best. Eventually, he will leave and things will be back to normal. It's not his first appearance and it won't be his last.

I think back to Dexter and admire how he copes with his dark passenger. I haven't made it to that level yet. Each time he arrives in my world, I end up feeling a sense of overwhelming sadness. Thinking that I took every creative photo possible. That there is nothing more I can do. Even worse, when I do take photos during this period, I often regard the work as crap and hastily trash the photos soon after taking them. Not a good practice by any means.

Again, it's not the dark passenger's first or last appearance. All creatives are well aware of his presence. It is just a matter of how he is dealt with. That is what is most important. He made his appearance the day I gave back the loaner. It's been about a week now. I'm hoping that I can make it back to normalcy before the holiday's arrive. Only time can tell.


The best advice I can offer to others that hit the creative wall, so to speak, is to go with the flow. Grin and bear it. It is a temporary phenomenon, I promise. Most importantly, do as I say, not as I do. For the past week I've been doing nothing but obsessing over the fact that I have no new ideas. I've also been obsessing over the coming of the new 1d X. I need to follow my own advice, obsessing will only make it worse.

Other than that, I hope your dark passenger stays at bay for as long as possible. If not, no worries, he won't be here for long.


On a happy note and closing, I'm super excited for a couple of projects I have lined up for the new year. You won't be disappointed.


Ok, so today's post wasn't the cheeriest of them all. I like to go out on a positive note. Something in the world that has been bugging me. Have you ever noticed that gas prices ALWAYS end in 9/10 of a penny. What is the freaking deal with that?! I think we'd all be okay if that was rounded up. I mean, come on, Really?! 9/10 of a penny. Can we take a worldwide vote to eliminate that friggin' price? It drives me crazy. Never is it 7/10 or any other fraction. Nope, it is 9/10 of a cent, every time. It is not even a price I could pay. What if I wanted one gallon of gas? How would I get change on that price? Think about it...