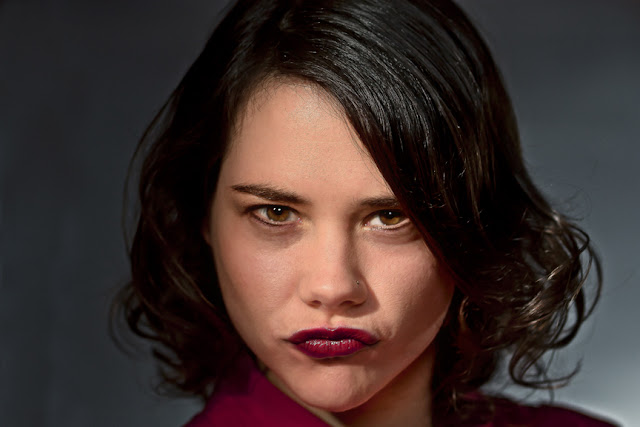 Welcome back to another installment of this ever changing, ever evolving and ever growing blog that has ever and never before been seen on the internet.

Nothing like an intro that is totally full of crap. But, that's how I roll. I'm honest and full of it at the same time. Today, I had nothing more interesting to start off with so I thought that to grandeur-ize myself and my blog would be an excellent idea.

So, without further ado...


Ok, ok, so a five minute portrait, such as the one seen herein, is a bit of an overstatement. From setup to saving the final .jpg image may have, and did, take quite a bit more time. But, on the other hand, the actual shooting process didn't take long at all. In fact, as I'm typing, I'm going back to the files metadata in Adobe Bridge to see, in actuality, how long the shoot really took. 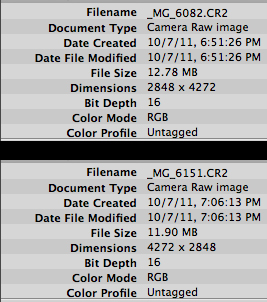 I decided to grab a couple of screenshots to show you that the proof is in the pudding (I'm a huge fan of the corniest of one liners). Now, although I am known to be the jokester, this image is 100% true to the time line of the actual shoot that went down the other evening. If you don't understand the simple clip of metadata, (metadata is the info the camera stores about each file which is usually much more in depth than this tiny sampling) I have highlighted these small portions which include the "date created." By looking at the first one you can see the first file was created exactly on 10/07/2011 at 6:51:26 P.M. This was the first shot fired. Conversely, you can see that the last RAW file created was on 10/07/2011 at 7:06:13 P.M. This was the exact time that the final image was taken.

There are a number of things that we can deduce from these findings, some things that have just surprised me as well. First of all, the obvious, is that the shoot took place over an amazingly short period of time, 14 minutes and 47 seconds, to be precise. Next, I personally had no idea the shoot was actually that fast. The night of, guessing, I thought the shoot took closer to 45 minutes or so. These figures kind of blew me away at first glance. I had to double check to make sure I wasn't missing anything. Now, what you don't see is how many frames were taken over this period of time. After again reviewing my RAW files, I noticed that there were exactly 71 shots taken over this period. Yet another interesting fact is that included in those 71 frames and 15 minutes, were frames that needed light adjustments. It was about 10 frames in until we were full go with everything set perfectly. Finally, one of the reasons that this shoot was completed so quickly was something that you can not readily see in the metadata but it's there if you look and think real hard. Can't figure it out? Fine, fine, I'll share the secret. Look at that date and time. Shooting took place on a Friday, evening at that. The model and I both had plans for that particular evening and neither of us wanted to be working too late. We had to get shooting and get moving.


If you were wondering just who is this wonder woman who procures such beauty while in front of the sometimes intimidating lens. Her name, Ashley Clarke. Her journey, quite extensive. Ashley currently resides in the city of angels, Los Angeles. There she is currently an aspiring actress who has already won some significant roles in numerous indy films. The Mobile, Alabama native began her journey at a young age when she transplanted herself to Pennsylvania to study at Kutztown University. From there she moved on to Philadelphia where she eventually networked her way to California.

Considering she is an actress, Ashley was very easy to work with. I was commissioned to do her newest headshots on this recent night. Little planning was involved. The only info I had, the day of, was that she needed something a bit dramatic as the new shots would be used while auditioning for the role of a prostitute. No small feat by any means. Although the shot posted here may not be her choice for the final product, the details that went into the others were very similar.


As already mentioned, we had little time to get some winning frames. When the beautiful actress arrived I immediately began to visualize how I would light her. I knew I wanted to go a bit dramatic. With dramatic comes shadows. I also had to consider what I would shoot her against. Our studio setting options were limited. She offered that very commonly, headshots that she typically sees are done against a natural (i.e. trees and leaves) backdrop, with a blurred background. I thought to myself how cliche that look has become. Sure, it has its time and place and I don't mind shooting in daylight but not for this one. While on the topic, many photographers state that they prefer available light for those shoots. I too, prefer available light. My strobes are available to me so I use them. Ok, that was a joke I heard somewhere before, don't give me the credit for those words of genius. All joking aside, those words stuck with me when I heard them. It is funny but so true. Ambient (i.e. sun) is fine but not controlled if used as your only source. I prefer to control my lighting environment, outdoors or inside. I'll overpower the sun if need be to get exactly what I imagine. I seem to be going off track here. Where'd I stray, oh yeah, backdrops and cliches.

After careful consideration, Ashley, my business manager/VAL/assistant/wife Stefanie and myself decided that we pull out the sheet metal. I've used that as a very successful backdrop in the past. You can see those results [here]. The sheet metal was purchased from Home Depot. It is a 3x3 foot slice of specular, shiny goodness. It ran me about 20 bucks, if my mind serves me correctly.

Ashley and Stefanie went in the other room to do some final hair and makeup adjustments (I don't have a clue about those two things) while I worked frantically to get the set ready for shooting. The clock was ticking, now to let you know, that 15 minutes of shooting hadn't begun yet. My prep time was the longest part as it usually is. 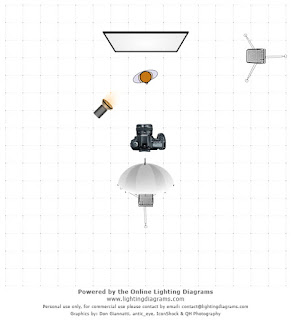 Dramatic was the goal and I was spinning my wheels trying to think of something that would work. I didn't want to get too over the top or it would look a bit too commercial or fashion oriented. I had to find a fine line between uber creative and usable. I ultimately decided on a three light scenario.

Working from back to front, the setup was as follows. The background light worked a dual role. I had it place parallel with the background, about five feet off to camera right and behind the subject. Dual roles? Yep, while getting things in place I had to set that strobe in a way that wouldn't blow out the background too much. I just wanted to rake the light across from camera right to left. I decided to throw its beam into the widest zoom setting the strobe would allow. This helped to throw a tiny amount of light on the back edge of the subject, becoming a ever so slight rim. Hard to notice in this actual photo but it's there.

The key light was the one you see just at camera left. This strobe was gridded and gelled. I decided on a 45 degree grid to get full coverage on the model's face. I also gelled it with a 1/4 CTO (color temperature orange) to bring out some life in her face. This is a standard choice of gels to slightly warm up portraits. So standard that I have one permanently strapped to the back of some of my strobes, via high tech scotch tape, for easy access. This strobe was placed on the 45's. Meaning that it was on a 45 degree angle on the X and Y axes.

The last and equally as important was the fill light. This light is used to bring up any shadow detail. Rather than leave those shadows black, it brings them up to have detail and information in them. For that light, I used a large 45 inch brolly to spread the light across the entire subject. This flash was placed about eight feet overhead, just behind the camera and myself.

Now, this post would not be complete without writing how I triggered those three strobes. You should all know by now. Come on, say it with me. I can hear readers all over the world. Shout it out. POCKETWIZARDS! Pocketwizard and I haven't yet set a date but we will be married. Yes, I am currently married but I'm thinking that the wife and I may have to convert to polygamy. If she doesn't oblige than the PW's and myself may have to move into a hotel or something, until she reconsiders. Something is surely wrong with me, I know. Therapy wouldn't be a bad idea.


This will be short and sweet. I went with my typical numbers on my manual DSLR settings. First was my ISO (ASA) which was at my typical 100 setting, to keep noise on my ancient camera at a minimum (getting goosebumps knowing that Canon 5d mark iii will be soon a reality). As for my shutter, I went with its normal sync of 1/200. Aperture I kept on the low end for a couple of reasons. First, I didn't want the background to be in focus. Second, I wanted to be able to fire the strobes at low settings, allowing me faster recycle times which in turn equates for faster shooting under a tight schedule.

14 minutes and 47 seconds later, the shoot was complete. Ashley was very pleased with what she was seeing. Saturday she was off to L.A.


I haven't worked on her headshots just yet but did want to get one of the portraits (the one above) completed for today's post. I had lots of work to do to give it that glamourous look. After doing all of my typical RAW and .psd adjustments, I added some very special treatment to the image. To pull this off, I tweaked the hues, saturation, contrast, et. al. To get the unique look that you are seeing, I played with the tonal contrast and some other adjustments in the Nik Color Efex Pro plugin. I unleash more and more undiscovered features in that plugin every time I use it. I highly recommend this tool.


I think that 'fin' is french for 'the end.' I'm trying to wrap this up since I want to get outside with some minimal gear. One strobe, one PW and my camera. There is a specific street performer that I'd like to shoot, if he's out there. Wish me luck.

Special thanks to my wife/VAL/assistant/business manager. She played a great directing role while shooting Ashley Clarke. I couldn't have pulled it off without her.

Ashley, good luck in your endeavors.