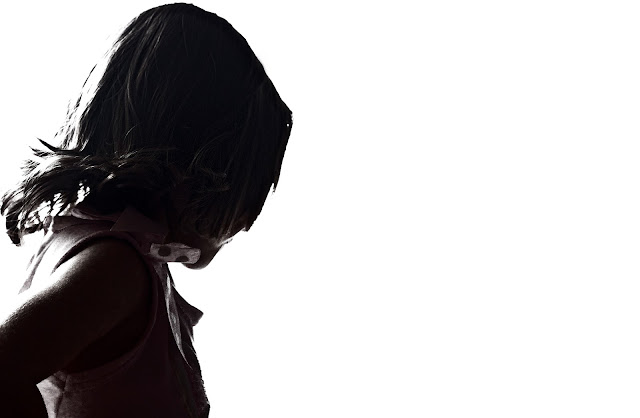 After last week's disaster, and I'm not talking about the hurricane, I'd like to, hopefully, get some redemption today. I had some very close people tell me what a disaster the article was. Hey, I knew it was going downhill right from jump street. Today, I plan on earning back my street cred. Respect!


The client of this shoot was one very very small person, Katya. Yes, same name as our next pending hurricane. To add to the strangeness, the shoot occurred during hurricane Irene. Ok, enough hurricane talk. I'm as probably just as sick of hearing about them as you are.

Back to the client, Katya. She is not a little person as we call the vertically challenged but little as in baby. If I had to guess, and I'm sure her mother will be slightly angry that I don't know, but I think Katya is about a year and a half, in age.

Prior to the shoot, I had seen portraits of the child that her mother, Oksana, had paid for earlier in the year. They weren't awful portraits by any means but they lacked something. What I noticed was that they were your typical studio setting photographs. You know the ones I'm talking about. Imagine the 90's patterned muslin backdrop. Lit by a single strobe with little interest. The setting probably never changes from client to client. Again, imagine the days of elementary school. When we lined up like cattle, one by one, for our yearbook photos. Sit on the stool, the photog snaps one image, hands you a parting gift, typically a black pocket comb that he just adjusted your hair with and sent you on your way. Those photographers probably make a decent buck but I just feel that the amount of creativity that goes into those shoots is nonexistent. I felt the same thing when looking at Katya's portraits. Someone plopped her butt on a prefab set, tripped the shutter and handed mom the bill. Next.

Oksana and I discussed what she would want out of this shoot. We shared, and I use the term loosely, ideas. Mom explained what she thought would make a beautiful portrait, something that really stood out. I, on the other hand, tried my best not to knock her ideas. I'm not saying her ideas weren't valid but knowing what she wanted and what she was proposing, probably wouldn't jive to yield an awesome photograph. My plan was to make her look like a pure rock star. Period.


After agreeing that the cattle call style portrait would be in bad taste, Oksana and I agreed on something very clean, the seamless white background, sometimes called cyclorama or cyc. Without going into too much detail, the cyc background is typically a solid color, usually white, and gives a sense of infinite size. Sometimes these are permanently built into studios or they can be set up using large rolls of paper. Not having the largest of spaces, I used the later. Via Calumet, I purchased two twelve foot stands, a crossbar and a roll of Arctic white paper. Oh, the stand and crossbar package also came with an awesome, heavy duty carrying case. The rolls of paper come in two sizes, 107 or 53 inches. I almost went with the big boy but after careful calculations of my space, decided that the 53 inch roll would suffice. To clarify, those numbers are the width of the roll, not length. Their length is pretty long, not sure but I think somewhere around fifteen yards, I don't quite remember. The length allows you to dispose of the paper once it gets a little too dirty. Simply tear off what you don't need and it starts out fresh again. Think of a gigantic roll of toilet paper.


The rain was relentless that night and I wondered all day if the shoot would even happen. I watched CNN and The Weather Channel all day as they tracked the destructive path of Irene. Ok, I promised no more hurricane talk but the story wouldn't be complete without some added color. Oksana, husband Vlad and Katya were absolute troopers as they decided to risk driving through what was coming up the coast, like a bat out of hell. They were to arrive at 3:00 p. m. and it was closer to 4:00 and they hadn't arrived. As I became a little unnerved, I decided to give them a call. To my relief, they were simply running behind schedule.

Upon their arrival, I met the family at their car, regardless of the rain dumping on my head. To my surprise, they had also packed their silver Lexus with toys, props for the shoot. I shook my head in disbelief. I was not planning on adding any extra elements to the shoot but I didn't want to upset mom. I helped carry the enormous toys up to my place.

Before we began shooting, we discussed some details over some DiBruno's Asiago and Micheladas. Yep, those were the same Micheladas that caused last week's disastrous posting. As for the cheese, I've been on a total cheese kick lately. The other night was Manchego with a nice pinot noir. Fantastic. Anyways, shortly after enjoying the snacks, it was time to get shooting.


I knew we had to work fast. The set would be intimidating, even to a grown man, let alone, a baby. There were lights, stands, people, just a room full of confusion. Any curious baby would have a hard time posing for the camera.

While Oksana began putting Katya into wardrobe, I locked in some strobe and exposure settings (more on that later). I didn't want to have to make major adjustments during the shoot, as this would eat up precious time and I didn't want Katya to get distracted. Any minor adjustments I would be able to make without anyone noticing.

After having some more cheese, it was time to get shooting. I laid on the floor to get a better vantage point and a more interesting point of view. Oksana and my business manager Stefanie assisted in helping Katya pose in the proper position. Husband Vlad was in charge of tracking the storm. If things got too bad outside, we would have to cut shooting and allow ample time for the Koslova family to get home safely.

To my surprise, Katya was quite the model. From time to time, she was loving the lens. She began posing like it was her day job. Amazing, just over a year old and she knew, to some extent, what was happening. I ripped off about 50 frames, motor driving right through, in minutes, if not seconds. We paused for a wardrobe change and Michelada refill. Without hesitation, shooting resumed and again, tons of keepers. This process continued for about an hour and finally called it quits as I, not the baby, started to get a bit cranky. Kidding of course. No, after that hour, I had over 200 frames, most of which were definitely usable.

I took the family over to the MacBook Pro where I uploaded the RAW files and opened them in Adobe's Bridge. There, they could look at large thumbnails of the images to see which they admired most. Oksana was to choose ten of her favorites, a task that became very difficult. Rather, she decided to choose about thirty of her favorites. She just had a hard time deciding as she loved so many of them. I reassured her that this is not uncommon. Instead, I told the mother to allow me to do the choosing, to trust me. She obliged and we wrapped for the day.

The precipitation was escalating and the family needed to hit the road, fast. Everyone quickly gathered up the clothing, toys, etc. and ran for the car. Soon after, they were on their way home and did arrive without incident.

The shoot was a success, now it was time for the hard part, narrow 200 files down to just ten awesome photos. 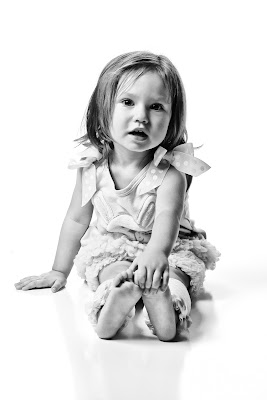 Cyc backgrounds can be a bit tricky. The quality and quantity of light you are trying to achieve depends on a number of specific variables. Not wanting to go into every possible way to light white seamless, I'll just give you a quick breakdown on how to achieve the effect I used to light Katya.

I wanted the background to be pure white for the shoot. As I mentioned earlier, a very clean yet very stylish look. To produce the images I used three strobes, each in a large modifier. Specifically, three 45" Calumet shoot through brollys. Two of the brollys were aimed at the seamless white background. The camera left brolly was angled just past center towards the right of the paper. The camera left brolly was angled just past center towards the left of the paper. Before setting a third, I dialed in the power of these lights. Pure white was at f/5.6 or 1/4 power. With Katya in frame, she would look like a pure shadow. To light her, I had to be exactly one stop below the background strobes. To get that one stop loss, I simply dialed the third strobe in at 1/8 power or f/8.0. Speaking in terms of f-stops can get a bit confusing which is why I added the exact power setting of each strobe.

In camera, in full manual mode, I set my exposure to the following settings. First was my aperture, at the f/5.6 that I already mentioned had me at +/- 0 EV (exposure value). Next was my ISO which I kept at my favorite ISO 100 setting to avoid any undesirable noise (still holding my breath for the 5d mark iii). Finally, my shutter was at 1/250. I can pull off 1/320 without any banding but 1/250 did the trick just fine.

All of the strobes were triggered via Pocketwizards (I <3 you Pocketwizard). I used four PW's in all. One on camera to trigger each of the three strobes. The lens of choice was the Canon EF 50 mm f/1.4.

Speaking of cyc backgrounds, I learned a little trick from photographer Zack Arias. To achieve a reflective surface, below the subject, simply add a piece of 4x8' white tile board from Home Depot, on top of the floor under the subject. Shiny, and perfect reflections for white seamless photography.

I don't want to get too much into post production today as I'm still working on a few of them. Ok, I lied, these two are complete, I just don't feel like typing anymore. I've had enough as I'm sure you've had too.

I hope I have redeemed myself. If not I'm sure you will all let me know about it.