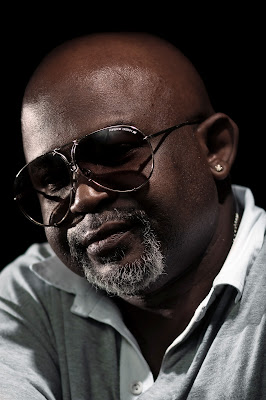 Last time we met, I had posted part one to "shooting dark skin tones." Today we will go into part two and learn how the shot posted here was made, as well as, learn a bit about the subject and photographer, Gregory Brown.

Before we get into the life of Greg Brown I'd like to share with the readers, how this shot was made. Since now you've all read and understood what took place in part one, I could now move along. As mentioned in part one, that soft yet strong photo was an accident of sorts. I ended up making something from nothing, per say. On the other hand, the shot here, was very intentional, no mistakes, no luck, pure preplanning and precision to execute what, in my humble mind, became a brilliant portrait.

If you are the least bit intrigued by what you have read thus far then I recommend reading some more to uncover the mystique and genius of one man behind one lens, me. I did say I was humble right? Anyway, without further ado...


I'm not going to make you bored with details about this shoot since part one somewhat covers just about everything. I will get straight to the point. About time right? The main goal I had in mind was to light the subject, Gregory Brown, with a slightly complex three light setup. Along with the three light setup, I would have the subject model against a plain black background. Simple, clean, elegant. Need I say more? I was working with three speedlights, one Canon 430ex ii and two Vivitar 285 HV's. All three to be triggered by Pocketwizard plus ii's.


[Quick note: I recently purchased the industry standard, Pocketwizards. I was about to buy a set of eBay or Hong Kong wireless triggers but too much negative research had lead me to spend more to guarantee peace of mind. So far, the are nothing less than awesome. Don't skimp on things that can make or break a shoot based on the bottom line. It will only come back to bite you, you know where.]

Now, where were we? Oh yeah, the highly complex three light setup. I assure you, fear not multiple strobes. There is a careful balancing act involved but if you are comfortable being a one strobe pony, you can enter the world of multiple strobes and yield some spectacular results. I'm not knocking the one strobe pony by any means, hell, some of my shoots require nothing more than a single flash. I'm just saying that you can get extremely creative using two or three strobes.

I had the plan in place and when the day arrived, I was super excited, ready to get shooting. 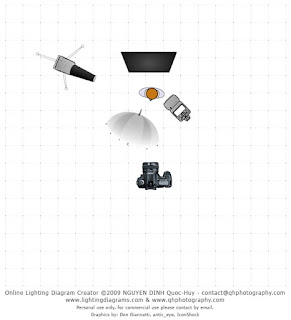 This diagram is a loose interpretation of the light setup. Loose, I say? I only say loose since it is not to scale, hell if it were, those strobes would be really huge or the model would be really tiny, neither of which was the case.

I had one 45 inch shoot through brolly (old school lingo for umbrella) up close and personal. It was in pretty tight on the 45's. I could link to another post where I explain "the 45's," but forget which post I did so. Rather than dig, I'll give you the quick and dirty lowdown. On the 45's is a term meaning that the brolly is angled down at about 45 degrees on each x and y axis. To simplify, angled down 45 degrees towards the top of the model's head and 45 degrees towards the front of his face. This light was slightly overhead and camera left. This large soft light source was a fill light, just bringing the exposure to about 2 stops under par. The other two strobes would work as key and rim.

The strobe behind the subject was modified with a DIY snoot, head level and aimed towards the back of his nugget feathering towards the back, just a bit. I didn't want to aim directly at his head since it was acting as a rim light, any further forward would have been, well, too much.

The overhead light was aimed almost directly down towards his face, from overhead. This strobe was also snooted with the same DIY version. This light would act as the key, adding some nice interest light to his face, kissing him from the top of his head and working its way down.

All three lights were powered pretty low so I had no fear that any would spill onto the background that I wanted to keep pure black. To ensure that, I kept the subject about eight feet from the background. Had I posed him right up against it, some spill would have illuminated the fuzzy black blanket hanging on the wall. Not a problem, just would have been a lot of work in post later.

Ok, this was stuff that you, since reading part one, already knew. Let's get into the balancing act of the three light setup.

Look, you can make this stuff as easy or as difficult as you want. It depends on your school of thought. If you are a pure, by the book photographer, who does everything by the technical, you probably take the long and torturous route to balance those strobes. Hell, you probably even still use an expensive light meter to find those exposures. I'm not saying that there's anything wrong with that but there is more than one way to skin a cat. My journey was a bit different. I have my own version of a light meter, it's called the back of my camera's LCD with histogram, equally as effective and free.

I started with one light at a time. First was to get the ambient down to dark. I was shooting in a studio environment so it was very easy to control my light. My camera was set to ISO 100 at 1/250 and f/2.8, in full manual mode. This would get me that dark exposure that I was looking for, a black palette on which to build light. Next, I added the fill light, just bringing the subject up to visible, shadow details. This was the strobe in the brolly, at 1/32 power. After adding the fill, I then wanted to add the key. I tweaked the overhead strobe's power and distance until just enough light would drape down his head and face. The snoot would control that beam so that only his face would catch that light, no flare, no unwanted light. This strobe was at 1/16 power. Finally, I added the rim light from behind. Again, it was aimed from behind left towards the back/side of his head. I dialed that strobe and distance until I found the perfect amount of light along the back and side of Greg's head. This flash was also at 1/16 power but placed further away from the subject, as I needed less light. The Canon strobe head was zoomed to 50mm and the Vivitar heads were set to normal.

If you were paying close attention to the last paragraph you may have noticed how I balanced those lights without my saying. I said a key word of different variations. The word of the day is "ADD." Why such a key word? Think about it. I didn't just randomly set some strobes, cross my fingers and then pray and spray (heard Zack Arias use the term pray and spray, and loved it). Rather than pray and spray, I took the slow and steady route, one strobe at a time. I knew the purpose going into the shoot of what each light was to do. I then started with the fill, found its proper exposure and moved on to the key. Once finding and then adding the proper key light exposure it was time to move on to the rim light. I finally found the rim light's proper settings and then it was time to motor drive away.

One light at a time, that is the unsolved mystery of this three light setup. Take your time in the beginning and then you will save time in the end. Need I say more? Hell, If I go into even more detail, the model wasn't even in the chair when I was finding the proper exposure for the fill. Once he sat, I only had to dial in the key and rim.

So who is the man in the photograph? Gregory Brown resides in Philadelphia and is a photographer of many talents. In the past he worked for the Philadelphia Inquirer, the cities premier newspaper. Today, Greg is a freelancer, shooting many events such as concerts, fashion shows, weddings, et. al. Greg Brown also is known for his ability to shoot green screen, a discipline that scares the hell out of me.

One interesting fact that I'd like to share about Greg is, well, just follow me here. The day Greg arrived for the shoot, he also had his equipment with him. Being the nerd that I am, I had to see what was in his bag of tricks. It's something that every photographer cannot resist. We all want to compare toys. To my surprise, he pulled out his new Canon 7d. And why was I surprised? Well, as long as I've know Greg, he was a Nikon shooter. It was the one thing we did NOT have in common. There wasn't too much time to get into the details but I'm dying to find out what made him switch. I can tell you this: it had to be something significant to make him do so. He had to invest in new lenses and the such to make everything compatible with his new Canon gear. I'm not knocking Nikon by any means, I'm just curious about the reasons why he would have swapped out for a whole new system. I've rarely met a photographer who changes their whole system. Greg, if you are reading, let us know.