did you hear the one about the dentist, the comedian and the photographer? 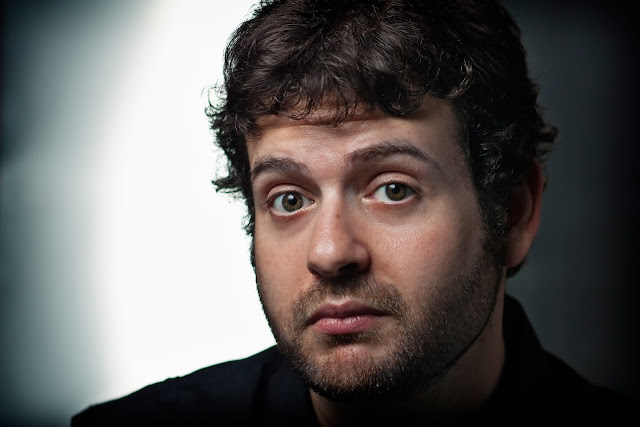 Today I will discuss, in detail of course, the who, what, when, where and why of the route to creating some very interesting headshots/portraits for one very interesting person. The person I'm speaking of is Andy Moskowitz, an improv comedian from the Philly area.


Before getting into the nuts and bolts of the shoot, I'd like to share my feelings of why his name sends chills up my spine.


Chills up my spine is not the most welcoming introduction to the story now is it? Before passing judgement, let me plead my case. My wife and business manager, Stefanie, who is in charge of booking certain clients, had marked this one on my iCal. The name, Moskowitz, immediately stirred up some childhood nightmares. The name was that of my childhood dentist, Dr. Moskowitz, of course. I'm not knocking the doc or anything, but what child isn't terrified of their dentist? I was no exception.

The day of the shoot had arrived and improv comedian, Andy Moskowitz, was soon due to arrive at my home studio. The whole morning I wondered if there could be any relation to the dentist. I thought that the chances would be slim. On the other hand, I thought that the story could be an ice breaker. Andy arrived and my pre shoot nerves began to kick in. The thoughts of the doc had faded far to the back of my head. The combination of coffee and nerves can get me so shaky that even I can get some image blur at 1/5000 shutter speeds. It was time to focus, size up the subject and prepare to shoot.

One of the cool things about photography is that you get to meet many different people, from all walks of life. Andy was no exception. We began to dialogue. It is very important to get your subject talking, to get them comfortable on your somewhat intimidating turf. Many people walk into a photo shoot and freeze up at the sight of the equipment that is there for one reason, to be aimed and fired at their face. Andy and I had some coffee and shared some stories. The atmosphere quickly became more relaxed, that is until, he dropped a bomb. Andy mentioned that his father is, well, you guessed it, a dentist! I couldn't believe it. Could the world in which we reside be so small? Maybe a coincidence. What did I know? Moskowitz could be as common a name as Smith. I'm sure there are hundreds, if not thousands, of dentists in the region. More than one had to share this name. I then followed up and asked if his office is located in the heart of South Philly, on Packer Ave., across from Chickie's and Pete's. Wouldn't you freaking know it?! Andy, son of the man who used to bring tears to my eyes.

I quickly started to think of the irony here. His father used to whiten my teeth and Andy asked if I would be able to whiten his in post production, since having coffee just before the shoot. Luckily for Andy, my cleaning process is not as nearly as dreadful as his father's technique.

On a serious note, I assured Andy that his father was nothing less than an amazing dentist. I was just a kid and kids just don't like seeing their dentist. It's an American tradition. If anything, I'm thankful of what Dr. Moskowitz had taught and done for me. I'm a 29 year old (wink wink) man who has had few cavities and no major dental problems. Thank you doc!

The connection between Andy, myself and his pop helped ease the mood and we were ready to get busy. Andy went for his wardrobe change and I prepared the lights and other equipment. 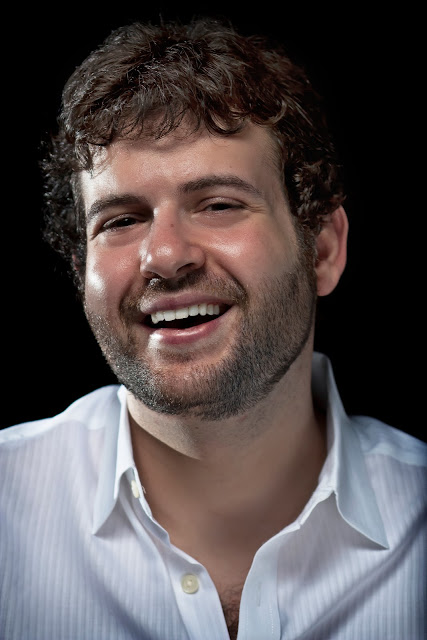 Andy had mentioned that he would like a clean black background for his headshot. Hell, he is the client, who am I to argue. I did tell him that black is no problem but I'd also like to do a few with another interesting background.

The day before the shoot, I had an epiphany. I was at a friend's luau and all I could do was think of an interesting background on which to shoot a comedian against. It hit me, sheet metal. I exited the luau and headed over to the closest Home Depot, found a 3x3 piece of sheet metal, for about 25 bucks and headed home, excited, wanting the shoot day to arrive so that I could light this metal.

I explained, to Andy, my ideas with the metal and he was game. First we shot against the black background using a three light setup. All strobes aimed at Andy. I used a fill light through a 45 inch umbrella, a snooted rim light and a Rouge Grid on the third, as the key light.

After motor driving through at least 100 frames it was time to switch things up. I grabbed the sheet metal, replaced the black with the shiny new surface and had to rearrange the strobes a bit. Why rearrange the strobes? Well, I wanted to light the metal. I had only three flashes on hand so I had to improvise a bit, get it? Improvise with the improv comedian? Forget it. Anyway, to do so, I bumped up the power on the brolly to use as the key and kept it at about the same position. Next, I left the snooted strobe in its camera left position. This would remain the rim. Although, I lowered the power a bit, not wanting the edge of his face getting clipped with the bright metal. Lastly, I took the Rouge gridded strobe and raked it across the sheet metal. That was place adjacent to the metal, at camera right, firing almost parallel to the shiny stuff. This would light the metal just enough, without too much light hitting the lens. This was a very carefully executed maneuver. The grid helped in concentrating the light into a nice, controllable beam.

We went though many different poses. Andy wanted a variety of images. Some more serious than others. Some were just hilarious. Once Andy got into his acting mode, he was very easy to shoot. The expressions he made were priceless. It made my job that much easier. In the end, we both agreed that the sheet metal background worked wonders.

The day was a success.

Who, Where and When 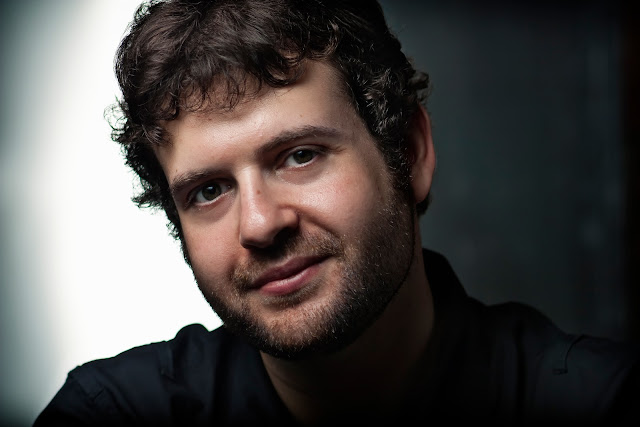 Now, the moment you've all been waiting for, Andy Moskowitz. Who the hell is this guy and where can you find him.

Andy is originally from the Philly suburbs. He attended Lower Merion High School in his earlier years. He then went to college at Johns Hopkins University, where he studied Film and Media studies, as well as Writing Seminars.


Today, Andy, writer and improv comedian has his plate full. Along with the writing he does for Temple University Health System, Andy juggles that time with his time spent on stage, entertaining the masses.

Some of the events that Moskowitz has performed just go to show, he is no joke. No pun intended. Andy has been welcomed and had great success at, just to name a few, The North Carolina Comedy Arts Festival, The Philadephia Improv Festival, The Philadelphia Fringe Festival and Duofest.

If you are looking for a laugh you can find Andy performing routinely at many theaters such as, the Shubin Theatre, Adrienne Mainstage and my favorite and America's oldest, The Walnut Street Theatre.

Along with his busy writing and performing schedule, Andy is also employed by the Philly Improv Theater (PHIT), where he is an instructor and performer of his talents.

If you'd like to learn more about, see perform or hire for your stage, you can contact Andy Moskowitz at moskowitz@gmail.com. If you've given up the old email route and only communicate online via social networks, you can find Andy's facebook page [here].

I want to thank Andy Moskowitz for being one funny subject. Thanks for letting me experiment.

And a big thank you to Dr. Moskowitz, flossing is important as you said.