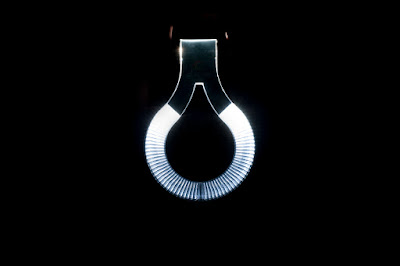 Today is the day you've been waiting for. You were awed by the photograph of the ring flash in full BTS action. It blew your mind and could not wait one more second to get the full unabridged review. Well, my friends, wait no more. As promised and without further ado, my honest and yet not so humble opinion of The O-flash.

I am not the most subtle person on the block so I'm going to get straight to the point. I hate this product. If you are interested in why, well, read on. If you want to simply take my word for it, you can exit out of here and go out and shoot something. Resources like this are awesome for learning but the only true way to better your photography skills is to pick up that camera and take some pictures. As for the curious, here we go.

I'd have to say, this was quite interesting. I ordered from a website called Gadget Infinity. This is a company that specializes in the sales of pro photography gear. The site is put together very well. The products seem to be of the proper caliber. I did some research and I came to the conclusion that the company is, to say the least, legit. I became enthralled with this site. The products seemed to be top notch at VERY reasonable prices. I've been wanting to buy a real ring flash for some time since it was time to trash my DIY version. DIY cereal box light mods are fine if you are shooting products at home or some close friends but if you have a client that is paying top dollar for a session, the aluminum foil lined Fruit Loops box does not suffice. The O-flash, only 25 bucks, almost identical to the Ray Flash or the Orbis which come in at about $200. How could I go wrong?

When I arrived at the Gadget Infinity's checkout page I noticed that the shipping charges were not so cheap. The product was coming from Hong Kong (red flag #1) so I thought that $21 for a five day delivery was reasonable. My brain accepted, my conscience was singing a different tune. The $25 product now quickly turned into a $50 product. Some can argue semantics. My conscience would disagree.

After clicking the "ok" button, there was no turning back since there is a no return policy (red flag #2). Being the nerd that I am, I decided to track the item every step of the way. This has no significance to the story, just thought I'd like to share. I can't recall if it was FedEx or UPS but I went to their website on a daily, make that hourly basis. Crazy? You bet! I found it intriguing, the route that the product took from Hong Kong to my doorstep. It went something like this:

Hong Kong to somewhere else in Hong Kong

From Taiwan to Japan

Japan to another place in Japan

From that place in Japan it went to Alaska

It left Alaska and arrived in Newark, NJ

After leaving Newark it arrived somewhere in Delaware

From Delaware to Philly

Philly to my home in Philly

That package has seen more of the world than myself, in less than a week.


I couldn't wait to tear open that box and play with my newest addition to my arsenal of gear. Everything looked great. I repeat, everything LOOKED great. I hadn't touched anything yet. This is where things start to get fishy. At initial grab, the product seemed to be of solid construction. It was even much heavier than I thought it would be for such a low price. I started to think that I had struck gold. It was made of a solid plastic with a thick rubber/velcro attachment section. This is the part that you stick in the appropriate strobe and fasten to the ring flash. Nice, I was beginning to feel that I had found a reputable establishment at which to purchase reasonably priced pro photography gear. That was until I turned it over to examine the front of the O-flash.

This is going to be hard to put into words. Hell, even a photograph of this wouldn't do my story any justice. I'll give it a shot. The front of the lens has a protective covering, a clear lens if you will. Let me start by saying that I thought this piece was to be removed and disposed of. Why would I think that? Think of a toy or a product that you buy that is hanging in its hard yet flimsy plastic packaging, on a store shelf. You know the plastic I'm speaking of. That packaging that you usually try to open with your teeth. Yep, that plastic. This is the same plastic that is used as a protective lens cover on the O-flash. Can you say cheap? Like I said, I thought it was to be removed and trashed (red flag #3). I was immediately aggravated by this construction. I wasn't going to let it beat me though since I did only pay $25 ($50) bucks for the ring flash. The build may not be top notch but by looking at it, it should perform the same. Right? 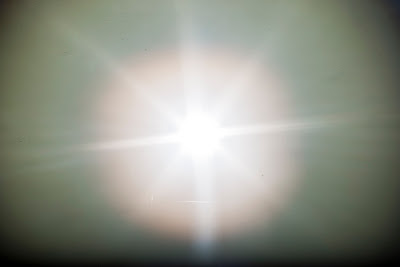 What you are looking at here, at left, is a shot of a Canon 430ex ii speedlite at full power. I shot at ISO 100 at f/22 and 1/320 shutter speed. I really cranked the settings to make sure you, the reader could see exactly what went down that day. I was beyond my camera's sync speed so you can see the dark band at the bottom of the frame start to rear its ugly head. That is a topic that will be shared at another time.

Back to business. I was shooting directly into the flash with a Canon 50mm f/1.4 USM lens. This is one of my work horses.

This is not your typical way of assessing quantity of light but I was so blown away by what happened just prior to this, that I couldn't resist.

About five minutes before coming up with this light experiment, I had eagerly strapped my gear to the ring flash to pop off a few test shots of some random things around the house. I wasn't shooting to make a masterpiece but just wanted to see and get used to the ring on the strobe. I don't have the images that were made before the shot above for one simple reason. I was so damn pissed off that I immediately deleted them. I had to double check my settings. My camera was synced to 1/200 and I was shooting wide open at f/1.4 at ISO 100. The flash was on full power, zoomed in even at 105mm. Had the ring flash not been there, I would have had a whitewashed frame, totally blown out, totally clipped. Rather, with the O-flash strapped to the speedlight, there was barely a photo. The whole thing was underexposed. Shadows were clipping like crazy and not a highlight anywhere. The histogram was laughing at me like a newbie trying to figure out how to shoot in manual for the first time. It was devastating. It was then that I decided to take the photo of the bare strobe at full blast to make a comparison.

Back to this shot. To create this, I moved nothing. The strobe and camera were left just as is. I simply securely strapped the ring flash to the strobe and fired another frame.

Do you see what I see? If you are new to the blog or to photography for that matter, you can see that there is a tremendous amount of light loss. It made me nauseous.

I immediately started to dig some more, on the internet. It's my own fault. I should have researched much deeper but the insanely low price sucked me in. I discovered that people have stated six stops of light loss. Others have stated two. I'm not sure of the exact amount but my scientific explanation is this: a hell of a lot of loss!

But Do They Perform?


This is one answer that, at the moment, I cannot answer. I was so angry about how much light this thing was sucking up, I threw it back in the box and haven't touched it since.

I am not totally knocking the product. Although it sucks the life out of the flash, take another look at the photograph with the ring attached. The quantity may be suffering but it seems the quality is there. The signature ring is quite clear. I think that if you have a camera that performs well at uber high ISOs, this ring flash my be a good option. I've mentioned over and over that with my dinosaur of a DSLR I cannot get into the four digit ISOs. I try to stay around 100 to avoid any undesirable noise levels. Even at a low ISO, I think this ring is usable. My report may be a bit skewed since I was shooting at such an extreme exposure setting. The goal of the article was to simply show how much loss of light is actually happening while using this product. If you are shooting with tons of power and backup then it should not be a problem. I, on the other hand, like to shoot at lower light powers. Shooting at lower power ensures rapid recycling times and I dig a quick recycle.


I'm not a hater by any means. I just like to tell it how it is. This product has much potential in relation to its price point. The build is mediocre and the light loss is tremendous but I believe that it will get the job done if used the right way.

If price is of no concern to you, I would say that you should go with the Orbis or the Ray flash. Now, if money is really burning a hole in your pocket then I would highly recommend over any of the above, the Profoto Acute 2 ring flash, a cool thousand bucks.

I have decided to change my thought process a bit. I know wholeheartedly believe that you get what you pay for. I've been researching for months trying to decide which cheap Hong Kong wireless triggers I should buy. After this little and inexpensive experience I decided not to go for the cheap but go for the industry's standard, Pocketwizard. Four triggers cost me about 700% more than the economical brands but at least I know I have a great product with no buyers remorse. I won't get into how amazing those things are, just yet. but stay tuned and you will see those babies in action.