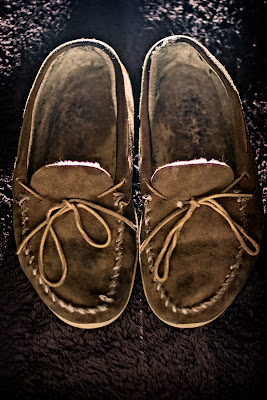 I'm glad to be here today, writing this blog. Yes, we all survived the apocalypse and the rapture. 6:00 p.m. came and went and as I predicted correctly, Harold Camping's second doomsday calculations were dead wrong. What a jackass. I digress.

Now that you have some understanding of reverse engineering, take another look at this photograph. How did I light it? How many lights were used? What type of exposure settings were used? Before I give you the answer, I would like to explain how I made it to this final image. There was much more than meets the eye.

The subject of the photograph you see here are my moccasins. They are far from new as you may have already figured out. Why would I decide to shoot some nasty old slippers for the world to see?


Ok, so I chose some ratty old slippers to shoot today. Why? Using the slippers atop the furry blanket, I wanted to portray an image of comfort with lots of texture. The moccasins you are seeing are those that I wear day in and day out. Those smelly old things are my security blanket. There are even days that I go to my local stores in Center City Philadelphia wearing my comfy slippers. Needless to say, I do get some strange looks from store employees and customers. Oh well, they'll get over it. Those worn furry shoes are also what I wear each and every time I write an article here. They are as just as important to the content here as are my fingers doing the typing. That may be a little insane but you get the point.

The Nutty Professor Begins the Experiment


Once I knew I was going to make a photograph of the slippers, I immediately grabbed the furry blanket to use as their background. As I mentioned earlier, the combo would have lots of interesting textures and textures should be evident in most of your photography.

First order of business was to choose a lens. I was initially going to go with my wide angle but decided to go with my trusty Canon EF 50mm f/1.4 USM. My reasoning was for its advantage over the wide angle, the wide open aperture capabilities. I knew I would be shooting in a dark ambient environment and didn't want to shoot at super high light powers. A fast lens is ideal for these situations.

Next order of business was light. I was going to grab a mod but decided that a large light shaper would not allow for much interestingness for an object of this size. I decided to light with a bare Canon 430ex ii speedlite.

The hardware was in order, now it was time to get the right brain out of bed.

Dialing in the Digits


I began with no idea of how I wanted to light the furry yet matted moccasins. Obviously, I would not light with the strobe on camera. We all know by now that on axis lighting is typically used by amateurs with typically bad, if not horrible, results.

Before getting the proper angle of light I wanted to find an exposure that would let in a bit of ambient. Being OCD, I usually like to keep my ISO as low as possible to avoid any unwanted noise. This day, like most, I kept it at ISO 100. I already knew that I did not want the strobe to overpower the photo so I had to burn in the ambient by slowing the shutter speed below its normal sync speed. I dialed it down to 1/100. I started with an f/2.8 and worked my way down until I had an underexposed image appearing on the LCD (screw light meters!). I had to open the aperture to its max of f/1.4. At these settings I had a barely visible image on the screen, this was exactly where I wanted to be, barely in the dark. It was time to light.

This is where things got a bit tricky. Remember, I wanted to pull texture from the background and the slippers. I figured I lay the strobe on its side, on the blanket, thus raking the light across the fur, so to speak. Raking the light will pull out the textures more than simply lighting from a higher angle. The low angle will throw some hard shadows across the furry blanket.

As stated earlier, I wanted to use the strobe to add a kiss of light to the slippers with the ambient playing a role as well. With that being said, I dialed the strobe down to 1/32 power. I also had the zoom head pulled back to 24mm so that I would be able to get a tad more coverage.


I played around with many different angles of light and camera. First obstacle to conquer was to decide at which angle I would shoot from. Nothing was really getting me too excited until I decided to shoot from above. Sometimes simple is the way to go. Sure, strange and interesting angles are something that most great photographs require but sometimes simplicity can be the best bet. It may be a safer but on this particular day, nothing else was getting my engines roaring.

Now it was time to decide proper strobe placement. This part almost caused me to pack up my bags, put the slippers back on my feet, plop my butt on the couch and watch Soprano's reruns On Demand, for the rest of the day. Why? I was lighting from every conceivable angle with less than stellar results. Strobe camera left, boring. Strobe camera right, boring. Strobe camera front, you get the point. The results were making me quite angry. I almost pulled the umbrella out but held back the urge knowing that this large light source would not yield what my right brain was envisioning.

As I was about to throw in the towel, I felt what I thought was the rapture. Was this it? Was I going to be judged? Heaven or perish hell on earth? No, no, no, I just had a new idea! A quasi backlight idea. A true backlit scenario would require the light firing from beneath the slippers with the strobe aimed directly at the front of the lens. I call this quasi backlight due to the fact that if I would have been shooting the moccasins from a lower frontal angle, the result would have been true backlight. I, on the other hand, was shooting down on the slippers with the light coming from behind and aimed towards my body but not the lens. You can see this light angle in the photograph. Notice how the back of the slippers have that heavy kiss of light? Yep, that's where the strobe's flash was hitting first. I liked it, a lot. Creative and technical problems were instantly solved, right? Wrong.


My creative thinking had nailed down the exact placement of the strobe so why on this post doomsday earth would I need rapid assistance from the logical left brain? Although the new positioning of the strobe was awesome it had caused the fronts, tops and insides of the slippers to be in the shadows and I mean heavy shadows. It was unacceptable, IMHO.

To remedy this problem and bring the shadowed part of the moccasins up to an acceptable exposure, I grabbed a large white reflector. If you are wondering the brand of reflector I like to use, well your guess is as good as mine. All I can tell you is that is is less than a buck and sold at most stores like Walgreen's. It's just a large white piece of poster board.

This poster board would act as a fill light. I simply placed the white reflector in front of the slippers aiming directly back towards the strobe giving a somewhat cross lighting result. Take a look at the high tech diagram below. You get a visual of how the strobe, slippers and reflectors were aligned in the final image. 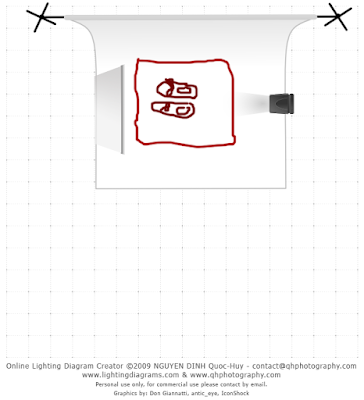 As you can see, this simple photograph of my smelly, dirty, ratty, old slippers was much more involved than you would think. Sure I could have grabbed a point and shoot, popped the built in strobe and had a shot of the moccasins from an identical angle but I can ensure you that the result would be crapola (that's Italian for "not good").

Nothing spectacular was done in post, just some typical alterations. Just enough to clean things up.

As long as Harold Camping's calculations were not off by one week, see you next time, here on earth.