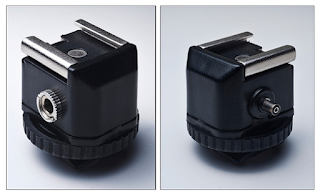 Where do I begin? Ok, first I'll explain to you what these little gizmos are. Second, I will give you my uncensored opinion of how they have performed for me, in the field.

Lumopro is a company that began operations in 2004. They specialize in the manufacturing of lighting and studio equipment for photographers of all levels, ranging from the amateur to professional. They are known to make high quality products at an affordable price. Not long ago they announced the Universal Translators. These little cubes would revolutionize how photographers take their light "off camera."


Without getting things too complicated, I will give you the basics of what a PC adapter is and what it does.

If you are entering the world of off camera flash, you will need a way to trigger the flash from the camera. This can be done one of two ways. First is the old but trusty approach of a wire. The other way is to do it wirelessly.

Until recently, whichever way you chose to trigger the flash there would have been need for the PC connection. It is an unusual connector type that some strobes have built in. On the other hand, some cameras even had this type of port built in as well. For those strobes and cameras that do not have the PC jacks there was a very easy solution, The PC adapter. This adapter, similar to the Universal Translator you see above, is be placed on the camera's hotshoe and another to be connected to the flash. If triggering the wireless route, a radio triggering mechanism is to be placed on the PC's hotshoe and connected by a short PC cord. On the flash end, the same approach is taken. Now, if you are going the hard wired route, simply place an adapter on the camera and one on the flash. The two would be connected by a PC cord of the shooters desired length.

This is all very efficient BUT very expensive. The PC adapters aren't too pricey, about 20-30 bucks a pop. Now, the cord, on the other hand, can quickly burn a hole in the pocket. The longer the cord, the more expensive it will be. This is where Lumopro came to the rescue.

Lumopro created the Universal Translator. It, like other PC adapters, has the required PC ports but took this technology one step further. On the other side, opposite the PC side, they added a miniphone jack. Huh? Mini what? This miniphone jack is the same as those you would use for your headphones. Yes the musical type. Why is this so revolutionary? I'm here to explain.

Ok, if you are on a budget and I don't know many people who are not these days, then you want to be as economically sound as possible. Let's backtrack for a moment. If you wanted to go the original route of hard wired off camera flash, before the Universal Translator days you'd be looking to spend at least a hundred bucks to make that happen. How so? Well, you got at least 30 bucks for each adapter and another 30 bucks for a SHORT PC cord. Not too versatile if you ask me. Now, enter the world of Lumopro's Universal Translators. You can snatch those up for 15 bucks a pop and here's the best part. Miniphone cables are cheap, real cheap. You can do some scouring of the internet and find 25 feet of miniphone cable for less than 2 bucks! Think of those savings. For under 40 bucks you can enter the world of off camera flash and take your photography to amazing new levels (camera and strobes not included).

Of course, the more advanced you become, it would be wise to invest in some wireless triggers. Regardless, you will still need those PC adapters so those are not money down the drain.

How Do They Perform?


This is the part of the article that I hit a moral crossroads. When the UPS truck arrived with my new little UT's, I was like a pig in, well, you know. I fell in love with them immediately. I had to test them out right away. They locked down to the shoe nice and snug. To the strobe, just as tight. Now, would these things really be dependable. I was soon going to find out. I connected the miniphone cable, said a quick prayer and tripped the shutter. Oooh baby. They were fully operational. Not one misfire. I was pleased beyond my wildest dreams. I have to say, before they arrived, I was a bit skeptical about how the little buggers would perform but I was wrong.

From an operational standpoint, they were a home run. From a construction standpoint, I will have to give you the sad truth. If you have been here for a while you may have read my "super cheap cross lighting technique" article. If you haven't, check it out before reading more here. If you have, read on. I feel like I'm writing one of those books with alternate endings. Anyway, where was I? Oh yeah, the field test. I'm going to assume that not everyone read the article, regardless of my direction. For those who refrained from clicking, I wrote that during that particular shoot, a gust of wind took down the shoot through umbrella. When the umbrella hit the ground, the UT snapped at it's seem. I was very upset to say the least. Not too expensive so I wasn't freaking out. When I arrived at home that night, I decided to Crazy Glue that sucker and to my surprise, it worked. Good as new, I hoped and still hope. Now, fast forward about two weeks. I didn't want to risk using the glued UT on the strobe end since I thought it was still vulnerable to another break. I decided then to put the glued one on camera and the freshy on the strobe. I couldn't freakin' believe it! The second one snapped! This time it wasn't the wind but my own fault. I was trying to set up the scene and lighting scenario and I had knocked over the light stand with umbrella, strobe and everything else attached. I can be clumsy, so sue me. Now I was pissed. Luckily on the other shoot, I had most of the shots that I needed. On the other day, I barely had any usable frames. Not good.


As mentioned before, I'm at a moral crossroads of sorts. I am quite frustrated that these adapters broke so easily. It's not like they fell from enormous heights. They never even hit the ground! The umbrella's leverage caused the gentle snap. I hate to write a negative review but after the second one broke, I had to share. Both are glued and functional but it gets a bit stressful when I use them. It can be quite embarrassing to have equipment break during a shoot.

The problem I am having is that they are so inexpensive that I will probably buy a few more and keep them as backups. Lumopro is the only company making this type of adapter. It's not like I could just find a different manufacturer. I like the product's features but hate its build. What can I do?

That's life I guess. Until next time.