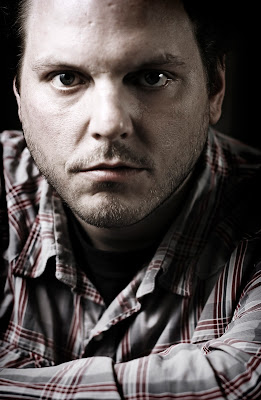 I awoke up today with a plan. It was instant. As soon as I opened my crusted eyes this morning, I was having a vision of shooting, a vision of lighting. I jumped out of my comfy bed and got to work. No time for the traditional morning routines such as brushing my teeth or combing my hair or anything that a typical human being usually does when tearing themselves from the warm blankets. Not today my friends, today I would shoot as is. I did grab a shirt since it was a little chilly in the room.


I grabbed the gear and immediately began to set the scene. Everything was charged and ready for some abuse. In minutes I had an umbrella locked onto a stand and the light PC'ed to the camera. The glass was chosen and it was time to put my thoughts and ideas into reality.

What was this vision? What on earth would make me, a person who absolutely love to spend all of Sunday morning under the covers, get working so early?

Come on! It's right there in the damn title! Shaping light for shaping faces. I don't I could have been much more clearer.

The Beautiful Model of Choice and a Plan


I know it may be hard to read this article due to the handsome man you see here. Good looks such as these can be very distracting. If only the world could be as blessed as this man.

If anyone actually believed that statement, well you should lay off of the LSD because, you must be trippin'. That guy in the photograph is yours truly. Let's get going.

Here's what my immediate thoughts were in the A.M. I needed a subject to shoot for today's blog. I had scheduled with a particular model but she cancelled late last night. She was out and about all day on Philly's Erin Express. This is a pre celebration to St. Patty's Day. This party kicks off early on the Saturday before the actual holiday. Buses around Center City Philadelphia shuttle the drinkers from bar to bar to bar to... all day long. It is quite a scene. Anyway, the call came in around midnight. I knew from the slurring of her words what was about to spew from her lips next. You guessed it, canceling the next day's shoot. I needed a backup plan. That's where I come into the picture, literally.

Since I knew I would be today's subject I needed a way to make a new an interesting shot of myself with lessons to be taught in the process. With me in mind, I had an instant plan. I admit, my face is not as chiseled as it was a few years ago. Marriage, pasta and Belgian beer can have this effect on one's face. My idea was this; to shape light around my melon to give a slimming effect. Can it be done? We would soon find out.

Typically, to slim down a person's face you would not want to drown them in gigantic, soft light sources. Think of lighting with a beauty dish. This light is large and very flattering for a six foot tall, 90 pound model. For the nugget sitting on my shoulders, not so much. So, what to do in this situation? The ideal fix is to feather the light. Feathering light is a process in which you pull the light away from the subject on any axis. Rather than center the light on the subjects face, you will pull the light in a direction that only the edges of that source will be hitting the subject. This technique will cause the light to fall off, where you want it to. As a result, the XL melon will not be lit all around. In today's experiment the light will fall off towards the back of the head, creating shadows that will draw the viewer's attention towards the front of the face. Traditionally, this is done with strip lights. As I did not have any strip lights, I would improvise (what else is new?).


I began with a Calumet 45 inch umbrella, with the back removed so that I was able to fire the strobe through its translucent material. The light was placed at hard 90 degrees, aiming straight across my face. It was pretty tight, about 12 inches from my face. To feather, only about a tenth of the umbrella's light would actually hit my face. To ensure that the rest of the light would not spill that much, I zoomed the flash to 105 mm, to narrow the beam of light. At about five feet, directly on the other side of my face, was a large silver reflector, to allow some light to kiss the dark side of my face. I powered the strobe way down, at 1/64 +2/3 of a stop, just under 1/32. To properly expose for this setting, I had the DSLR at ISO 100, shutter at 1/160 and an aperture of f/2.8. In retrospect I would have bumped the light power up and the aperture down so that I would have had my head focused throughout, without the obvious shallow depth of field. More on the self portrait problems later.

I was moderately satisfied with the results. It definitely narrowed the face, even if ever so slightly. Something about it was bothering me though. It could have been the fact that I don't typically like to be in front of the lens, which is probably a subconscious reason why I got into photography. I'll save that for the shrink. Regardless, I felt it needed some heavy Photoshop to make it pop. In the Adobe Suite, I basically did my normal edits and then played around with the hues and saturation. I got it down to an almost black and white with tweaks on the reds and greens. I added some vignette and called it a day.

Now I wanted to shoot, in some ways, the opposite to see what else I could to to draw attention away from my melon. Thinking of it now, maybe I should have just taken a picture of my foot and all problems would have been solved. 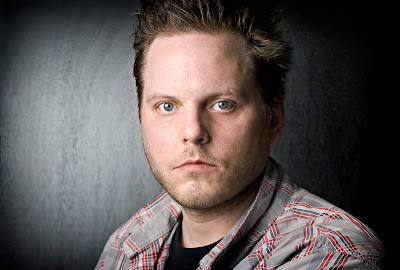 Not finished with myself just yet, I decided to flip flop the whole thing and light in a totally different manner. Before getting into the specifics, this type of "halo" lighting is created by a single light source, lighting the subject and at the same time throwing a halo type of light on the background, giving the viewer the feel of another light source on that background, which becomes a separation light. This technique is very very tricky. For some diagrams on this advanced lighting technique, check out [this] Strobist article.

I mentioned opposite light on this photo. Here's how I did it different than the other photo. Rather than feather the light towards the front of my head, I aimed the umbrella towards the back a bit more. What this does is create that nice specular light on the background, acting as your separation light.

I did say it's tricky, right? I assume not everyone hit the jump to see the Strobist diagram of this lighting technique. So, I will do my best to explain. First of all, you'll want the light at a 45 degree on the X-axis, up high, about a foot above my noggin. At this point the umbrella was at 90 degrees on the Y-axis, so I aimed it down about 20-30 degrees lower. Just as important, to catch the halo of light, is the camera setup. The camera needs to be angled slightly up towards the face of the subject. Think of how the light will come from the strobe and hit the background. Its going down on that 20-30 degree angle. Once that light hits the background and reflects towards you, the shooter, it will continue on that angled path. If you have the camera firing straight on, the light will then fall below the front of the lens. As a result, you will miss that halo and the background will end up black or whatever color it was to begin with. Oh, if you are going for this type of light, be sure that the background surface is slightly reflective or specular. If it is too, let's say, flat, then this effect will be very difficult to pull off.

Let's talk some exposures. For this particular photograph, I did not want a shallow depth of field. Before even messing with the camera settings, I cranked the speedlight up to 1/2 power while pulling back the flash zoom to 50 mm. This would nuke the hell out of my head and as a result I could pretty much get that aperture nice and small to get that perfect exposure. I ended up with the ISO at 100, shutter at 1/250 (slightly over its sync) and the aperture at a nice f/6.3.

I decided after a few frames that a tad bit of fill wouldn't hurt. Hard at camera right is a door. Behind this door is a storm door. In that storm door is glass. Far beyond the glass is the sun. I opened the door to allow for some ambient to fill the shadow side of my face. Not too much though, that would defeat the purpose of what I was trying to achieve.

I'm not sure how well this worked on slimming my bulbous head but the light is awesome regardless. Imagine this, a pretty girl's face rather than mine, in the same exact photo. I told you. Awesome right? Due to that observation, I decided not to tear in apart in Photoshop, in hopes of making me look prettier. I decided to clean it up as usual and call it a day. Looking back, a little warmth added in post wouldn't have hurt. I didn't realize how pale I was, jeez.


My Thoughts and Feelings of Self Portraits


I absolutely despise them. Was that blunt enough? Lemme' explain.

I'll list the good reasons for the self portrait before getting into the bads. Why? The goods list will be much shorter.

1. If shooting wide open, focusing is a giant pain in the ass.

2. Running back and forth, chimping, until you dial in your exposure (I start to sweat).

3. Sweating in itself becomes its own hassle.

4. Is the camera even aimed at the right spot. Again, more running, more sweating.

5. Are the lights aimed at the right spots. See part two of number four.

6. Did I blink? See part two of number four.

I admire the photographers out there who specialize in self portraits. It takes a hell of an amount of patience. Your time per shoot is probably tripled or quadrupled, simply for the fact that you are both the photographer and the model. You have to play both parts. If you don't, you will inevitably end up with crap. Good luck, if that's the path you have chosen. Me, I like to do it once in a while but I'd much rather have someone else in front of that lens, rather than myself.

Maybe that goes back to issues I need to share with the shrink.