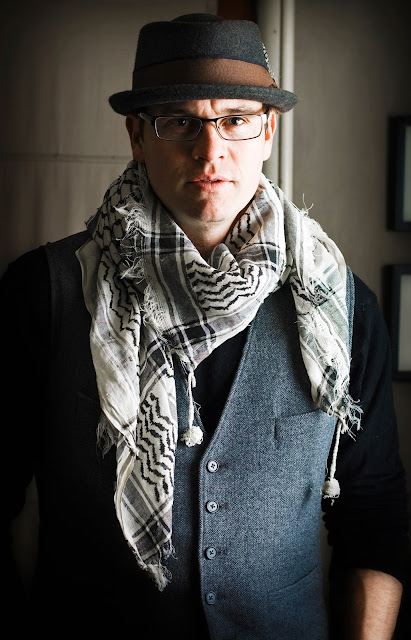 Today we will be discussing hard light. And as a visual aide to this discussion, we have the one and only Ellis Walding. Yes we've seen him here on other occasions. The photograph you see here was done after the headshots 101 photo shoot. Hit the [jump] to see the who, what, when, where and why's of that shoot. Being as generous as anyone could be, Ellis has no problem, after a shoot, letting me get in some personal work. That is a great way for any photographer to experiment and practice, ultimately, making you a better photographer. So, after a couple hours and multiple wardrobe changes, the shoot was over, and just as he was about to get ready to leave, I stopped him dead in his tracks. I let him know shooting wasn't quite over. It was my turn.


What is Hard Light?


Before we delve into the hard light discussion, let's first understand the different styles of lighting. If you are already a seasoned pro at lighting scenarios, either read as a refresher or skip to that which is relevant to your needs. Or, for that matter, if you feel this post is not for you and you wanted to spend some time online to avoid spending it with your significant other, doing chores or going shopping, then [this] video will eat up some precious time.

Ok, now that we have weeded out those that already understand differences in lighting scenarios, let's begin. I want to keep this as simple as possible. When you look at any given photograph, you will notice three levels of light. First are the highlights. The highlights are the brightest parts of the photograph. We could go even deeper as to specular light but again, for today's purposes, we will K.I.S.S. (keep it simple, stupid - the photographer's motto). Again, highlights are the bright parts. Period. Next we have the other end of the spectrum and that is the shadows. I can't believe that I'm actually going to explain this but here goes nuthin'. The shadows are, well, shadows. These are the darkest parts of the photograph. If anyone needs further explanation of these two basic terms, please seek your nearest emergency room and tell them I recommended that you see someone in the psych department. Finally, although very easy to understand but slightly more complex are the mid-tones. The mid-tones are the lighting levels that fall somewhere between the highlights and shadows. Hence the term, mid-tone.

Now that you understand the three levels of light (I hope), I can explain the difference between hard and soft light. I will first explain soft light so that we can get it out of the way and focus on the task at hand, the hard light.

Soft light is just what it sounds like, soft. If you are looking at a photograph that is lit by a soft light source, you will barely notice the transition from highlights all the way to the shadows. It is a very smooth transition.

This type of lighting is achieved by creating a large apparent light source. If you need to understand apparent light size and its effect on a subject, read [this] post for an explanation. If you were too lazy to hit the jump, I won't explain apparent light size but will say that the larger the apparent size of light that you are firing will create a soft source. If I want to create very soft light, I will usually shoot through an umbrella or softbox or trash bag. Shooting through a light modifier allows me to get that modifier up very close to the subject and getting close makes that light source appear to be larger.

Now, let's talk hard light. What is it? Well, think of soft light and the smooth transitions between light and shadow areas. Hard light is just the opposite. Hard light is the result of very abrupt transitioning between the shadow and highlight areas. The transition can sometimes be so abrupt that one may not be able to identify the mid-tone area in the photograph.  An easy way to identify hard light is by looking for the shadows. Are the shadows very distinct? A great example is to think of a bright sunny day. No clouds in the sky. The sun is not quite above your head but it is getting up there. What types of shadows do you see? Very dark and very distinct shadows. Many photographers will avoid shooting in those ambient lighting conditions. I, on the other hand, will use that light to my advantage. More on that another day.

How do we create this hard light? I explained to you that soft light has to do with the large apparent light size. If we use the sun as another example, think of a cloudy day. You can hardly notice your shadow if standing outside. Those clouds have turned into giant light modifiers for the sun as the key light source. The apparent size of that source has grown tremendously. The result is very soft light. Again, take away the clouds and the shadows become very harsh. Are you getting the hang of the apparent light size thing? The sun is enormous but very far so it appears to be small, resulting in hard light. If you move the sun a couple million miles closer, you'd get one hell of a tan and very soft light. Enough with these examples. I'm distracting myself.

Ok, so we need to create hard light, in a studio setting. This can be achieved in numerous fashions. My preference is either to shoot bare bulbed flash, which will give you super hard light (very small apparent light size) or to shoot into a reflective umbrella, which will gives much more control of the levels and intensities of how hard the light will be. If you are shooting into an umbrella, you have to move it away from the subject, unless you want the long metal shaft to be visible in the frame (that was a joke). The further you move the umbrella out of frame, the apparent size of that light source becomes smaller and smaller. 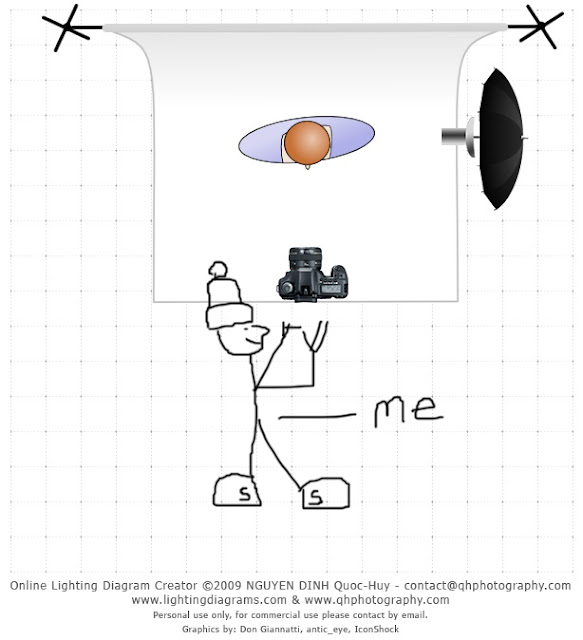 Before we go into the technical lighting details. Study the photo at the top of this post. Besides the fact that Ellis is wearing a strange scarf along with a fedora (complete with a feather), notice the light. This light is hard, even as hard lighting goes. The easiest way to identify this is by looking at his nose. There is a clear line going down the center of his nose dividing light from shadow. The mid-tone area is barely there.

How was it done? Take a look at the diagram to the left. I wanted to make this photo very distinct. I wanted to stray from any "safe" lighting scenarios. By safe, I mean shooting on the 45's. Shooting on the 45's is a term that I believe that I just coined, this second. I hope I didn't hear that anywhere else. I'd be so bummed out. Anyway, this cool term, shooting on the 45's, means just that. A very safe and yet effective light setup is to place your strobes, in reference to the subject, 45 degrees on the X-axis and 45 degrees on the Y-axis. This will give you Rembrandt style light. The signature of this light is the triangle shaped shadows under either eye. I say this is safe since it creates wonderful light without getting to risky. It will work in most portrait situations. I wanted to stray from this or any other lighting style that I'm used to using.

I went wild and decided to shoot on the 90's. Yep, you heard it here first, shooting on the 90's. I'm such an innovator. If anyone wants to use those terms in their publications, feel free to email me at speedlighter101@gmail.com. I will gladly discuss my usage fees. Anyway, shooting on the 90's. In reference to the subject, I placed the strobe 90 degrees on the X-axis and 90 degrees on the Y-axis. Usually, any photographer lighting at such an insane angle would usually have a reflector of fill coming from the other side. I said "screw it." The light was about head level aimed into a reflective umbrella, approximately six feet from the subject.

Side note: one of the only things I do not like about shooting into an umbrella is the amount of strobe power that it eats up.

The strobe was set to 1/2 power. This was slightly high for the the aperture I was shooting at. As far as exposure settings, they were as follows:


When and Why, Hard Light

Here's the dilemma. When to and why to use hard light. Aside from creative outlet, hard light can be useful when trying to define a situation. Hard light is excellent for focusing on the human body. Many photographers choose this type of light when shooting artistic nudes. It can truly enhance the shapes of each individual body. As for the image at the top of the page, hard light was simply a creative decision. I wanted something edgy. I think that if I had went the soft light route, for this particular photo, it would have been dull and boring. In the end, if definitely added some needed interest and intrigue to the image. As for detail, I really like the way that the hard light accentuates the textures in the clothing, including that crazy scarf.

If you really enjoy what hard light yields, I'd recommend multiple snooted lights. Using a single flash to illuminate a single photo, via hard light, is very tricky and risky. Reflectors, in place of extra strobes are also an excellent option. I opted away from the reflector, just to be that guy. I guess it was a pride or ego test. I just wanted to pull off something pretty cool, with a single hard light source. I was pretty happy with the result.


Sorry, I'm out of time today. I will save the secrets of this one for another day. I will give you a hint though. This photograph is night and day compared to the original RAW file. I went to town on this one. Slightly more than my usual edits but well deserved. Until that post, well, you'll just have to wait.