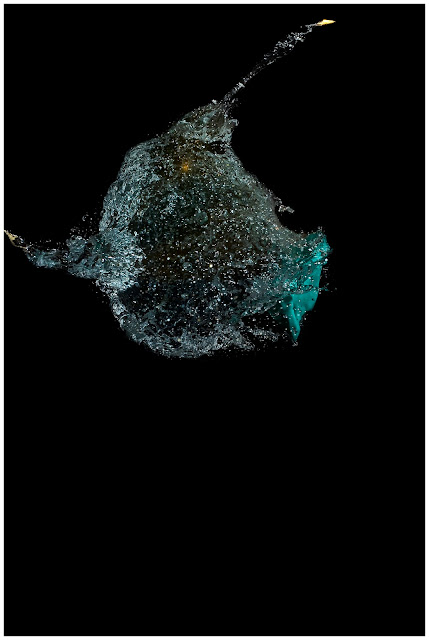 This was Edison's response to a New York Times reporter's question about the inventor's hundreds of failed attempts to create electrical light. A quick witted yet very impressive answer. As a photographer, I often think of that quote. Today you will see why.

Take a look at the photo. If you did not figure it out at first glance, it is a bursting water balloon. This, high speed photography, has become very popular due to the mainstream's intrigue and curiosity to how a photograph such as this was achieved. People are also wondering about the high tech photographic equipment that must be used to capture a subject at such fast speeds. Well my friends, today is the day. Yes, after reading this, you too will be able to achieve high speed photography. If you thought that you needed a science lab to do so, think again. Photographs such as these can be created just about anywhere.

Ok, let's get down to the nitty gritty about what gear is necessary for this type of shoot. First off, you absolutely, undoubtedly, with out question, must use an SLR camera. For any newbie photographers, that stands for Single Lens Reflex. I prefer DSLR which is the same but of the D for digital variety. I'm sure you can use other types of cameras but these will be the safest bet. I'm not sure of too many TLR (Twin Lens Reflex) shooters out there. I'm not getting into semantics right now. The unique features that these cameras possess are that you can take full control over their functions. Doing high speed photography requires your cameras full attention, not vise versa. Most point and shoot cameras require that you, the shooter, be at the mercy of the camera.

Another absolute is a tripod. Again, rules can be broken but if you want to make life as smooth as possible, I'd say that using a tripod will assist you in that life aspiration.

Next and as equally important as all components is off camera flash. Call it strobe, flash, speedlite, speedlight or call it Lucy. Whatever you want to call it, you will need it. And you cannot skimp in this department either. Just as your DSLR will be at your mercy, the same holds true for the strobe. You need a strobe that you can take full control of. This means adjusting every aspect of the light, manually. For those that don't know, yes, there are many possible manual adjustments that you can do with that $400 flash. If you thought that was just an overpriced light, think again.

The next piece of equipment is, well, you guessed right, also important. It is called a sound trigger. The sound trigger along with every other piece of equipment work synergistically. As I like to be frugal in my photography equipment choices, this piece would not be any different. If you want to save money, you can click the [link] and find out how to DIY on a very small budget. It's called the HiViz sound trigger and it can be made for about twenty bucks. This trigger will link to the strobe and pop the flash when introduced to the lightest of sounds.

Last but not least, you will need some balloons and water. If doing this at home, I recommend a place that is safe for absorbing lots of water. A garage would be ideal for this situation. I live in the center of a large city where a garage is a rare commodity. Instead, I chose the bathroom to do this shoot. Worked just fine.

Thomas Edison, Eat Your Heart Out!

Yes, those were the words I uttered to myself before I strapped in for a long, long ride. Before removing the lens cap was when Edison's quote entered my mind. Motivational, to say the least. I already knew how to achieve high speed photography, technically speaking, so I decided that without the HiViz sound trigger, I would improvise. I told myself that I was smart enough to figure it out. It would take a bit of patience and perseverance. No problem. Here's how I would beat the odds.

For high speed photography, you are not actually firing the camera at super fast exposure speeds. Quite the opposite is true. The exposure will be slow, on the slow end of about a second and anywhere up to three or four seconds.

Confused yet? How does long exposure equal high speed photography. Well, it's all about the speedlight. Flash power is not that of the quantity of light but the duration of the strobe. The lower the flash power, the faster the pop. At 1/64th power, a speedlite will fire somewhere around 1/25,000th of a second. That's pretty hard to imagine but you can imagine that it is very, very fast. It is the speed of light that will freeze the subject during a long exposure. The 2.5 second shutter speed becomes irrelevant, per say.

Super fast strobe? Check. The speedlite is set to a low 1/64th power, low enough to freeze action, yet enough light power to illuminate the subject along with the chosen exposure.

The bathroom is prepped for a mess. I taped black poster board to the walls of the shower to absorb light. I want the flash to focus directly on the bursting balloon.  Lighting from a 45/45 degree angle, I know what depth, dimension and texture will result. The bounced light may alter those intentions by introducing another light source.

Black walls? Check. For the most part anyway. I had less poster board than I anticipated. Mental note for next shoot. Buy more black board.

I pushed the shower curtain rod to be in the center of the tub. I then took thread and tied a long piece around the rod. The thread would suspend the balloons.

I filled up about 50 balloons with standard, bathroom sink, tap water. I was careful not to overfill since the thread would not hold a gigantic water balloon.

The weapon of choice would be a sewing needle, Scotch taped to the end of a wooden spoon. This would help keep post processing to a minimum. It will save lots of time editing out a small wooden spoon more so than editing out my fat sausage fingers. 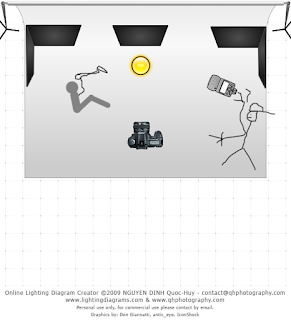 Take a look at the diagram. If you notice there is a second person. Yes, it turned out that I would need an assistant. My wife was to be the lucky winner of the open position.

I had everything set. It was going to be too difficult to do on my own. I needed to hit the shutter and shortly after, pop the flash. The beautiful assistant (see diagram)  was to pop the balloons (yellow thing is balloon).

I had set the camera to timer mode. This would allow me to hit the shutter and line up to fire the speedlight. My assistant would listen for the shutter and soon after, pop the balloon. As soon as she pops the balloon, I would pop the flash. It was quite a scene, you could imagine.

The plan was set in place. We were now working as a machine. The wife and I had it nailed down. She would count down, 3-2-1-pop. We had a few practice runs to make sure that we were on the same page. Would she pop on one or after one? Once we worked out the kinks, it was time to get the show on the road.

Pop after pop, the shoot was getting more and more frustrating. I certainly was a pro at learning how NOT to do high speed photography. I triggered the strobe, balloon by balloon. Flash too early. Flash too late. Balloon didn't pop. Strobe accidentally popped twice giving double exposures (actually came out pretty cool).

The bathtub quickly filled with wet rubbery remains of what used to be colorful birthday balloons. Casualties of what could have been.

A couple of hours pass after we tried new techniques. Different count downs. Alter the spearing angle. Before I knew it, the balloons were quickly dissipating. I knew that there were a couple decent frames, not what was preconceived, but definitely usable.

To the Digital Darkroom

As I sifted through all 50 RAW files, I found a few that were definitely cool, more than usable, far from what I wanted. I narrowed it down to the one you are seeing today. I cleaned it up in ACR and Photoshop. The black background needed to be more black. The water droplets needed some pop. All was done using multiple layer masks and my usual editing routes.

I finally saved the favorite as a .jpg, shut the mac down and called it a day.

Yes, you did need the stinkin' sound trigger.

I knew from jump street that the sound trigger would have helped in achieving what I actually wanted. I knew it and tried anyway. I look at the photo as a lesson, not a failure. Any photographer should know Edison's quote. You never fail at taking pictures. You may even down right hate some of the photos you take. It is just all part of a process to become a better photographer. You have to get out there and do it. I wanted to try high speed photography. I didn't let the fact that I didn't have one piece of equipment stop me. I tried, learned that, yes indeed, the missing variable would have completed the formula and yielded a photograph that I had envisioned in my head.

Rather than look at a bad photo and call it a failure, really look at it, analyze it. What could have been done to make it better? I promise, if you keep that type of mentality, your work will continue to improve, significantly.

Tomorrow I will shoot again. I may have some whacky idea and have no clue how to attack it, but I will keep at it until I succeed.

I may even build that damn trigger. With my limited knowledge of how to build a sound trigger, I promise that I will find out 700 ways of how to electrocute myself before I learn how to succeed at being a electrician.