dealing with a difficult model 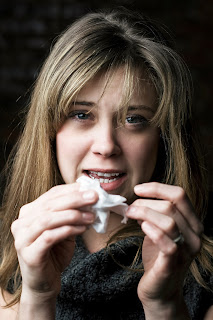 Today's the day. You have a client due to be at the studio for a shoot at the crack of dawn. You're a bit nervous as you check all of your gear to verify that all is working and working well. The coffee is ready, and it's the second pot. You guzzled the first pot since you couldn't sleep quite right the night before. After ingesting about 2000 milligrams of caffeine, you begin to wonder if you are nervous about the upcoming shoot or if you just overdosed on the joe. Then, there it is, the client walking up to your door. . .


I arrived at home on Thursday night to find a large package waiting in the stairway. I'm like a child when it comes to getting things in the mail, especially Fed Ex or UPS. Actually the USPS (United States Postal Service) has been quite crappy recently. The only packages I receive from that organization is usually smaller and hardly the same amount of fun. That place is only good for delivering junk mail and bills. I seem to be getting off on another tangent here. I do that. Anyway, back to the package. I ran up to open it. It came from Calumet, one of my favorite places to shop in the city. I opened it and found a delight. It was a new 45 inch Calumet shoot through umbrella with black removable back. Along with the shiny new umbrella was a Calumet umbrella adapter. The adapter allows you to connect the umbrella to flash and flash to light stand. Why so excited, you say? Well, for beginners, I had no idea how the package arrived. I did not order this. Well the guilty party was a client of mine. From time to time, as a gratuity of sorts, the client will buy me random pieces of photographic equipment. It is his way of thanking me for the work I've done for him (that's what I think anyway). Regardless of his motivations, I am in return very thankful for the gesture.

The morning was frigid, with temperatures ranging from the high teens to the low twenties. Call me a sissy, but this was no day for testing new equipment outside. Actually, it may have been an excellent day for outdoor testing, just not for me. I had plenty of ideas for indoor shooting. It helps to have large spaces and high ceilings to allow for a wider range of creativity. With the space, I could create anything from an artificial set to a basic studio. With the ceiling height, I could really push the limits with lighting styles. With the ideas spinning in my head and the gear calling my name, I had to get shooting, fast.

Ok, so I didn't wait nervously as I waited for the model to arrive for shooting. She was on the couch watching reruns of Grey's Anatomy. Although she was already on scene, you can bet your ass that what is about to unfold can happen to anyone, regardless of the person that will be the subject of the shoot. Reader beware.

The sexy and spectacular woman that you see above is the one and only, wife (or Stefanie, if you prefer). Before shooting we sat, put our heads together (figuratively, no physically), and did a bit of brainstorming. Unfortunately, our ideas weren't quite grooving. I had planned on doing abstract, seductive yet classy, nudes. She didn't bite, not even for the sake of the blog. It was back to the drawing board. I offered to do the same nudes but this time, add some sexy lingerie. She agreed that the ideas were very classy. We then discussed what would be worn and other minor details. Then, I was informed that these photographs would not be permitted to be posted on this site. Strike two. Once again, we discussed what would be appropriate (in her eyes) for blogging purposes. We agreed on a classical headshot, something that she may have some use for outside of the cyber world.

Stefanie went to dress up for the shoot. I started on the equipment set up. The umbrella's size is perfect. Much larger than those I've used in the past, yet not so big that it becomes annoying and difficult to maneuver. A 45 inch umbrella, in my opinion, is one of the most versatile sizes that you can work with. Everything was just about ready. The speedlight is on the stand, clamped to the umbrella. The Canon DSLR is on and fully charged. The Canon EF 50mm f/1.4 USM (shocker) is uncapped and tested (crossing my fingers). It survives another day. Camera and light are linked via Lumopro Universal translators. The umbrella is multi-functional. I could shoot into or through it. I like the soft light that is achieved by shooting through, so the black back was removed for this purpose. Everything is operational and the set is looking good. I fill the coffee cup once again.


Wife came onto the set, where the shoot was going to take place (duh). Soon after the final preparations, she began to sneeze. No big deal. Time was not of any real concern on this cold winter day. We had no other plans. So, I waited for the sneezing to pass. And waited. And waited. Apparently, it was a full blown allergy attack. There was no end in sight. There were only intermittent pauses in the sneeze storm. Being the trooper that she is, wife began to pose for the camera and me. I hit the trigger a few times to see if I needed to make any exposure or light/umbrella adjustments. As I reviewed the camera's LCD, I noticed that her eyes were clearly portraying an allergy attack. The poses were awesome but the eyes are the gateway to the soul. No matter how happy she appeared to be, her eyes were telling a different story. This shoot would have to be scrapped for another time.


How to Remedy an Unruly Model


Ok, so the wife was not exactly unruly but her inflictions were. This is just one example of how a shoot can go bad. But how do you fix a problem such as this. Let's say, for example, that you had a scheduled shoot, with a client, that is paying big bucks to have some portrait work done. On the day of the shoot, something goes wrong. The subject is having an allergy attack, chicken pox, flu or seizures. Do you reschedule or fight through? I guess the answer depends on both the photographer and the model. If the model is seizing, however, I would recommend calling 911 and getting some really cool shots while waiting on the ambulance to arrive. Hell, when would you get another chance to shoot someone about to bite off their tongue? How about the model that is simply, under the weather? If he or she still wants to shoot, you need to be the professional and make the right decision. Give a few test shots. See what the eyes are telling you. If you decide, against your instincts, to go through with the shoot, and the results are not up to par, you will have then wasted yours and the client's time. Don't be greedy. If you are honest with the client and looking out for their best interests, they will appreciate it. Offer to reschedule at their earliest convenience. And, do not charge them for the day that went wrong. I understand that you did your job and it was not your fault but the more successful person will chalk that up as a loss. This will increase your rapport with the client, tenfold. They will know, in the future, that you are compassionate with your interests being less self serving. The bottom line is, don't be a d@#k and don't be greedy.


If you were wondering how the shot above was achieved (weirdo), I will gladly share.


The post here today was shot from the hip. The sneezing model caused the whole day's process to change. As a photographer, you must learn to adapt to ever changing environments. Never assume (ASS U ME) that all of your ideas will go exactly as planned. I knew that today's shoot was going downhill fast. I decided to get a shot of wife, just about to sneeze, looking awful. Although she hated it, I thought it was an awesome photo that would work out just fine for what I wanted to share here today.