not a photo shoot in charlie sheen's hotel room 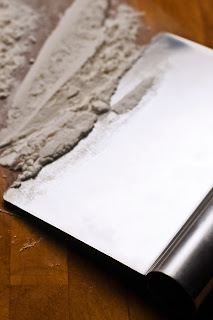 Although this is probably what the coffee table in Charlie Sheen's hotel room resembled during the recent events that took place in his life, it is not. I'd also like to state that I have some sympathy for the guy. Hey, he's not a kid anymore. If he wants to hire a pro[stitute], than he is going to need to find some much needed stamina. If he chose to go the chemical route, well that's just his journey. I'm not an advocate by any means, far from it. But I am understanding that he has a reputation to maintain, on screen and in the bedroom. That being said, I cannot, from where I sit, judge him in any way.

Well, now that I got that off of my chest, let us discuss the task at hand. There are many photographers in the world who specialize in shooting food. Food photos are often works of art in themselves, making the viewer's mouth water at the sight of various dishes. What they are not noticing is that there are very specific lighting details that go into this type of shoot. The next time you look at a food magazine or advertisement for a new restaurant, look closely. Notice that often, there are objects that are very difficult to light. Ah, yes, the silverware. Having silverware in a shot, or any cooking utensil, requires careful planning due to its highly reflective surface.

Today's post is about how to control specular highlights. What is a specular highlight? The short and sweet answer is this: the hot spot or bright spot in an object that is the brightest reflection. I don't think I could simplify that anymore. Imagine shooting directly into a mirror, with direct flash, what would the result be? Yes, awful, if you were shooting yourself in that mirror, you would simply see blown out flash, everywhere. Now, think back to the food photographs, with silverware in frame. If that silverware, all shiny and beautiful, is lit improperly, the result could be horrifying. On the flip side of that coin, if done properly, the highlights will be silky smooth. Read on. . .


Today, I was digging around in the kitchen drawer to find some super shiny utensils to demonstrate the proper way to shoot such an object. I ended up with a handful of things that I found to be ideal. Ask me what these strange objects are and I would give you a nice blank stare in return. I know they are to cook with, that's it. I narrowed it down to the gizmo seen in the photo. It's not very sharp but seems like it can do some light chopping, which is why I pulled out some flour (I think) to compliment the scene. I grabbed a cutting board and placed it all together to look like something you would find in a restaurant's kitchen.

Again, this gizmo had a large flat area, silver, shiny, and likely going to be a giant pain in the rear to light. Perfect. Time to get to work. Here is a diagram of how everything was placed. That's me at camera left.

First, was subject placement. I placed the cutting board with gizmos onto a stool, approximately three feet in height. Next, I set the camera tripod. This was extended about two feet above the subject, with camera aimed downward at a slight angle. The angle was somewhere between 45 and 90 degrees, in reference to the subject.

Next, was light placement. I had placed the strobe on a light stand at camera right and slightly behind the subject. The speedlite was bare, angled at 45 degrees up and towards a large white reflector.

Third, was the reflector positioning. This part is very, very important. If angled wrong, the whole point of this will be null and void. The reflector's position inevitably will have to be adjusted during the shoot. To do so, I simply hand held it. To make this possible while shooting, I attached my shutter release cable. The cable was long enough that I could hold that, reflector, and trigger all together. That's what I call multitasking!


Camera settings were similar to many of my indoor studio shots. Using the Canon 40d, DSLR, I put in full manual mode, as always. With a low ISO of 100, I would yield minimal noise. I synced the shutter at 1/200th of a second, with the speedlight. I'v noticed that I could get up to 1/320th of a second with no banding, but I was totally fine at its sync speed today. Aperture was a bit of a challenge. I used my portrait lens for the shot, the Canon EF 50mm f/1.4 USM. I wanted to use that due to its amazing aperture abilities. I was going to open it wide up at f/1.4, but that was not pleasing to the eye. I stopped it down and ended up at f/5.0. It worked, but in hindsight I would have been even happier somewhere around f/11. If you notice, some of the flour starts to blur at f/5.0. Again, I was initially going for lots of blur, but in shoot changed my mind. F/11 or somewhere in that range would have given sharpness all the way through.

Using the Canon 430EX ii speedlite on the stand, its bare bulb setting was 1/16th power. This setting gave the strobe enough power to go from flash to reflector, from reflector to subject. Light power can drop significantly over short distances (Inverse Square Law). Had I had this same powered strobe aimed directly at the subject, with the same settings in camera, the shot would have been overexposed, a lot.

The reflector was a large white poster board bought at Walgreens, for a measly 75 cents. I held this over the subject  angled at an approximate 45 degree angle. This would give a large, soft, diffuse light source, angled in such a way that when the light hits that highly reflective surface, it will bounce under the front of the lens of the camera. If you read an earlier post, I compared light to a billiard ball. I will give that same comparison. The camera lens is the pocket. The flash is the cue ball. The subject is the 8-ball. If I hit that cue ball in a way to make the 8-ball sink into the pocket (lens), the shot would be blown out. Rather, I want to miss the pocket. I aim the cue ball (flash) towards the rail (reflector), with enough angle so that when it hits the 8-ball, it misses the pocket. The result will be uniquely lit specular surface.

I am anticipating your next thought. Yes, this shot could have been done using a softbox or umbrella. Today, I wanted to create similar light for under a dollar. Thinking about it, it actually cost less, since I have used this white poster board for previous shoots, I'd have to say that I obtained my ROI (return on investment).

How to make the same shot a disaster 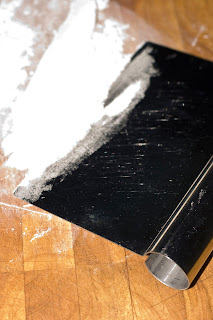 This shot is an dual lesson in photography. I did this shot, on purpose to demonstrate that with the same exact camera set up, but with different light, how the shoot (or any shoot) can go wrong, very wrong, so wrong that if you are doing the shoot for a restaurant, don't even expect a free appetizer.

To achieve this mess, the only change I made was to remove the beautiful, bounced light and added direct flash. Notice how the image just loses any depth and texture that were originally captured. The photo just feels flat, boring, and lifeless. These are traits in a photo that will quickly get you 86'ed from future shoots with a finicky French Chef.

The specular surface gave the opposite effect that we were trying to avoid with the off camera flash. Rather than seeing too much light on the reflective surface, the light is lost. Think of the billiard game. The cue ball (flash) was positioned in reference to the 8-ball (gizmo), in such a manner that it was hit nowhere near the pocket (lens). The hard shot ran up the table to the far corner pocket. Rack 'em up, you loose.

So, what lessons do we learn? First, direct, on camera flash is usually bad. And when I say usually, I mean usually, like, most of the time. It has its place in photography, but using it as a key light is not one of them. Think of those family portraits that everyone looks like washed out, red eyed demons. That is from that tiny flash built into the camera, your enemy. The other lesson is, off camera flash, although complicated, can produce beautiful, dramatic effects. Don't let the former happen to you.

To put the finishing touches on the shot, I had to to some retouching. I opened the RAW file in Adobe's Camera RAW editor, and adjusted the usual suspects. I was happy with the exposure but felt I had to adjust the Recovery slider ever so slightly. This adjustment will take down the specular highlights. Be careful with this one, as it cannot fix totally clipped highlights. Something totally blown beyond recovery will not be remedied by this tool. If the details in the highlights were overexposed and missed by the camera sensor, they are gone. This tool cannot fix what is not there, it is that simple. I bumped the slider up to 20. I was not totally unpleased with the original, but felt that with a tiny amount of Recovery, that the brightness of the surface was nailed down.


I then open the image in Photoshop to do my final tweaking. I always do my color correction first, to remove the unwanted color casting. I open Curves and adjust accordingly. After this, I usually like to add a bit of sharpness using the High Pass filter. I don't go overboard here, or you will end up with a Dave Hill photo gone wrong. Finally, I adjust the Hue/Saturation of specific parts of the photo, to ensure everything looks balanced.


All in all, I feel that the final shot came out exactly as I had planned. I wanted those highlights to be silky smooth and I accomplished it, for less than a dollar. Ok, the other gear costs money, but think of that ROI. Get yourself a couple decent paying shoots and that gear becomes free, sort of.

Have a great weekend and until next time. . .