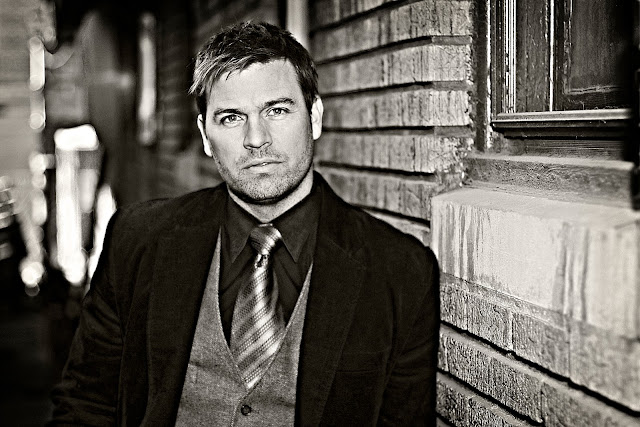 Today's topic is about black and white photography. Although this type of work can be done in camera, it is usually all created in post. And there is more that goes into creating black and whites than meets the eye. Many people think that you simply convert image and presto. Unfortunately, it is not that simple.

You can do that, but your results will be disappointing.


On this day, I was doing a shoot for a local, Philadelphia, model/actor, Ellis Walding. Ellis has been called "Philly's Fabio," being on the cover of countless numbers of romance novels. Walding has also had his parts in a number of films, such as, Unbreakable, The Best and the Brightest (in post production), and Sex and the City. Along with his busy modeling/acting schudle, Ellis also makes time to run the bar/restaurant that he owns in Center City, Philadelphia. He was in need of some new headshots. The shoot went very smooth, as he is no stranger to being in front of a camera. I have to say, it made everything much easier. After getting the headshot nailed down, I wanted to get some creative shots for my own portfolio. He was game.


I decided to do the headshots at Ellis' local pub. It's called Roosevelt's, located at 23rd and Walnut Streets, in downtown Philly. The bar has been around for a quarter of a century and the client base is diverse to say the least. It is a popular hangout for students of University of Penn and the Wharton Business School. Along with the eclectic group of students, there are plenty of local Rittenhouse Square residents that frequent the establishment. Side note, the burgers are out of this world!

Choosing his place of business as a set was not by accident. If your subject is in their comfort zone, it will be easier the get them to relax and as a result, you will get the shot, faster. Again, we nailed down the headshots and went on for the creatives.

After taking a walk around, scouting out some cool places to shoot, I decided on the alley behind the pub. Alleys are very cool. They have very interesting components. You can find broken windows, falling brick, rusty pipes, and stinky dumpsters, all of which can make for interesting backgrounds. My point is, if you are shooting in a city, go for the alleys, but be careful as well. If you get stabbed, shot, or robbed, don't say that I didn't warn you.


Before getting into the tech geek details, I want to say that I always shoot, in camera, in color. Even if I know 110% that the shot will be black and white, I always shoot in color. Some purists will want to stone me for making that statement but I will always defend the statement. Why? If you try to be a tree hugging hippy purist, and go for in camera black and white, you are painting yourself into a corner. You can get the best shot of all time, award winning, career changing photograph of the century, IF and only IF, it were in color. Get the point? You can always go back and forth from color to monochrome and vice versa. But, if you shoot in camera black and white, you CANNOT go to color! Don't limit yourself. Give yourself the option so you don't have regrets later on.

Ok tech nerds, the breakdown. I went pretty basic for this shoot. Canon 40d with Canon 430EXii on the hotshoe. The sun was high in the sky this afternoon, without a cloud in sight. Thankfully, there were plenty of tall buildings surrounding, to give me some shade to work with. The background was dirty and full of distractions. Exactly what I was looking for, but didn't want to pull the viewers eye away from the model too much. To remedy that, I opened up the aperture on the Canon EF 50mm f/1.4. A nice wide f/2.0, was enough to keep the subject in focus, yet give a nice strong blur to the background. I worked with the camera's sync speed of 1/200th of a second and my ISO at my low 100. The flash was on the shoe angled up at 45 degrees. I had a bounce card connected to the flash by my trusty rubber band. My bounce card of choice, you guessed it, The Joker, from a normal deck of cards. I wasn't using my flash as a key light, only for fill. The key was the strong ambient sunshine. I could have overpowered that with a small aperture and high speed sync, but wanted that big aperture. I dialed in the flash to 1/4 power and started firing away.

It wasn't long before having a few awesome frames to work with. The shoot was complete, and I still had no idea that this one would end up sans color.


I first open the images in Adobe Bridge. Bridge gives you the ability to preview your work. It is also very useful when trying to find specific frames with specific exposure settings. It is a great organizational tool. For example, by default it shows every shot, with every camera setting. If I want to view only those shots that were at f/2.0, I check that box, and now only visible are those frames. Its a great time saving tool.

When I find the shots I like, it is then that I decide this one should be in black and white. Why? You ask. After closer review, I see many different textures in the scene. I wanted to focus the viewer's attention to those textures. I think that the textures may have been lost, had I left the final image in color.

From Bridge, I then open the file in Adobe's Camera RAW. Now, Even though I now know that I will end up without color, I still do all of the proper color corrections. This will give you a better balanced black and white in the end. Exposure was pretty good, I only adjusted the contrast a bit. For sharpness, I left the sliders at their default settings. The Adobe RAW editor automatically adjusts the sharpness and detail sliders to 25. This is not a permanent setting and it can be adjusted to taste. I just left them alone since I knew that I was going to do all of the heavy lifting in Photoshop.

I'm now finished in RAW and open the image in Photoshop. First things first. My religious step by step process for image processing rarely diverts. It is not to say that it must be done my way, but my way will save headaches later. First, I always work the Curves adjustments to remove any color casting that every digital camera on the planet will produce.

Knowing I wanted to give this photo a hard core, edgy feel to it, I had to do some extra sharpening, along with some other tricky treats. I want to break this down very easily so there is no confusion. Sometimes my descriptions can be a bit vague, but since the post processing is the nuts and bolts of this photo, I will explain as if writing for an Ikea brand table's instruction manual.

Step One
Duplicate the layer on the LAYER palette
Go to FILTER - OTHER - HIGH PASS type 4.0 for RADIUS
In the LAYERS palette choose VIVID LIGHT for the blending mode
Now flatten the image.

Step Two
Duplicate the layer on the LAYER palette
Go to FILTER - OTHER - HIGH PASS type 6.9 for RADIUS
In the LAYERS palette choose COLOR for the blending mode
Set opacity to 40%
Now flatten the image.


At this point, the edgy, rock star look is starting to emerge. But not done yet, more tweaking involved before getting into the black and white world.

Now we are getting somewhere. I have this super cool shot. I was very tempted to leave as is without going for the black and white conversion. Remember what I said earlier, shoot in color and you have options. I can now see how it looks in gray scale, and if I hate it, I can always go back to color. No problem. Purists, eat your heart out.

I now have options of how to convert this image. If you simply take the saturation all the way down, you will end up with a pretty dull, run of the mill, monochrome photo. So rather than take this boring route, take the creative super highway. Add a black and white adjustment layer. This layer gives you a whole array of adjustments. You have a number of presets such as high contrast blue, infrared, neutral density, etc. Depending on the photo, one of these may suit your needs. Or, get adventurous and pick a preset and then modify those settings. That is what I did for this image. I chose the neutral density filter, this gave me a look that was pretty close to what I wanted. After that I used the color sliders to dial everything in. I didn't have any scientific formula for that part of the process. I just grabbed each slider and moved them up and down a bit to get the result I was looking for. Flatten that image and on to the final step.

I was pleased with what  I was seeing, except that the background and foreground were a tad bright. I had the perfect fix. I added some vignette. There are multiple ways to achieve the lens vignette. My technique is quite simple. I first duplicate the layer. Then, I change the blending mode to MULTIPLY. Now you will be looking at a dark image. Then I make a rectangular selection at approximately two inches in from each side of the photo. Next, REFINE EDGE, from the SELECT tab. In these settings change the sliders to the following levels.

Once I click OK, I see your rectangular selection morph into an almost circular box. This box will have very soft edges as a result of the settings in REFINE EDGE. I then delete the selection, remove the box and flatten once again. Now I have a nice vignette that helps draw the viewer's eye to the model, giving him more pop, and pulling him from blending with the background.

Save the photo and the job is complete.


I was very pleased with the results of this one. Choosing to go black and white was the right decision. Look at all of the textures in the photo. The bricks, suit, vest, tie, all brought out by the fact that there are no distractions by colors.

Shoot in color! I don't care what any tree hugging hippy purist tells you. Listen to them and regret it later. I promise.

Have a great weekend.