how to photograph smoke 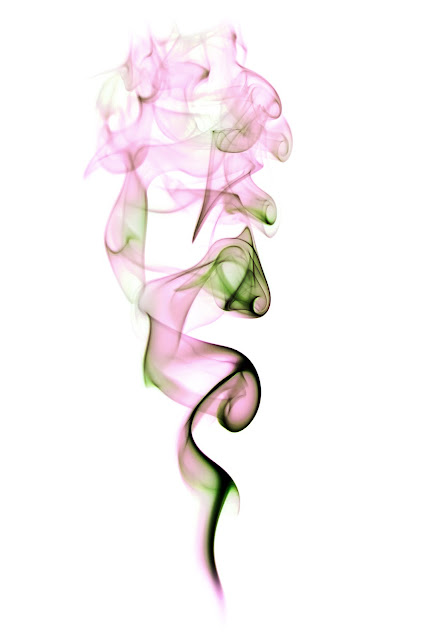 How do they do that?

We have all seen these cool photos, I don't care if you have ever picked up a camera in your life, you've seen them. Maybe you had no idea what you were looking at. Maybe you stared at the photo and it just blew your mind. Staring in disbelief, you say to yourself, "it has to be a digital creation." You were wrong. Today I will show you how to photograph smoke, easily, and awesomely (not sure if that is a real word).

I woke up this morning to an empty house. Just me and Bruno, my sometimes overly excitable, pit-bull. How could I have such a mean beast in my home? He is about the friendliest animal that I have ever had contact with. He just loves life, every second of it. I highly recommend this breed. Anyway, the wife is away, shopping perhaps. I don't know where she went, but as you all know, this is the best time to make a mess of the home. I quickly grab the gear and turn a room into a makeshift studio. I pull tripods from under the bed, backdrops from the laundry room. The rest of the gear packed safely and neatly away in my secret hiding place. Why secret? Not sure, I'm just weird like that.

I was getting the gear prepared for another masterpiece. When I unzipped the bag to grab the camera, I realized one key thing missing. I had no idea what to shoot! I only knew I had to get something done, and fast. No telling when my better half will get back. I decide to go risky. Smoke. For this shot you need to use something that will give you continuous streams of smoke. I like to use incense. It gives wonderful, long lasting smoke. Unfortunately, my wife not only hates the smell (I agree), but she is also allergic to it. Time is of the essence.

Get shooting fast, and get rid of the evidence. No telling what would happen to me as a result of this smelly mess. Hey, If I could shoot this outside, I would. Unfortunately, it would be impossible, as with any slight wind would make it highly difficult to get controlled streams of smoke. Even in the home, I had to make sure no fans or central air were running. I wanted perfect calm in the room. 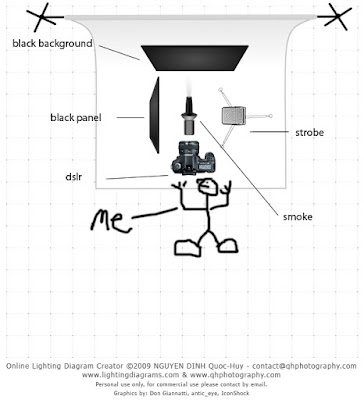 
If you look at the lighting diagram that I created, you can see that this type of shot is accomplished in a somewhat simple manner.

First, you want to have a nice solid black background (yes, the photo is a white background, I'll explain later, relax). For this I used large black poster board. Notice that at camera left I also have a black panel. Its purpose is to control any reflections from that side of the room. I want this light highly controlled. Any deviation from perfect light control could make this shoot disastrous. This black panel will absorb the light and block any bounce from that side.

Strobe of choice, my 430EX ii. Boy, I love this flash. Tons of features that I rarely take advantage of. But it is nice to know they are there if I ever decide to use them. I place the strobe at camera right facing directly at the smoke at a hard 90 degrees. Any modifiers for this light, you ask? I used only two, not seen in the diagram. Attached to each side of the strobe are my lucky jokers from a deck of playing cards. I've mentioned in earlier posts that I like to be frugal in my gear choices and the cards were on hand. These act as makeshift GoBo (something that goes between the light and something you don't want the light to hit). The card closest to the camera will prevent any possibility of lens flare. The card closest to the background will prevent any light from spilling onto the background, keeping that nice and black. Ambient light will be controlled by my camera exposure. All of this adds up to the strobe doing all of the heavy lifting. The speedlight will be dialed in to only light the smoke, nothing less, nothing more. I light the incense and prepare to shoot.


As mentioned, I wanted to control the ambient with exposure. I also wanted the end result to be nice and sharp. To achieve ambient darkness I dialed into ISO 100, f/5.6, and a shutter speed of 1/160th of a second. Those who are paying attention thus far in the blog, will notice that this is not my usual sync speed of 1/200. Why? This answer may be difficult for many to understand, especially beginners. Try to follow. I will only explain this one time. At some point midway in shoot, I UNKNOWINGLY hit the shutter dial down a click. I didn't realize this until I was reviewing my thumbnails in Adobe Bridge. Amateur mistake? You bet. But the final product was not damaged as a result, so I will chalk that mistake up as a lucky one.

For a shot like this, it is important to keep in manual focus. You don't want the auto focus system to try to find the stream of smoke. I won't happen. Keeping the camera on a tripod is also useful for the same reason. Once you find the proper focus, your camera should stay in one place. Moving this will cause your focus to be thrown off. Get it right and leave it alone. The lens of choice today, the Canon EF-S 15-85mm f/3.5-5.6 IS USM. You ask why did I choose this particular lens. Another scientific revelation. It was on camera from the last shoot. Yes, my friends, that choice was out of pure laziness. Had I needed something specific in terms of length, I would have changed to a prime or what have you. Having shot smoke before, I knew there would be a viable focal distance in that glass somewhere.

I've posted about shooting water droplets and how patience is a large player in that shoot. Well, the same applies to shooting smoke. You will undoubtedly fire off lots of frames until you find a few that you like. I like to fire off 10-20 in succession, review, erase duds, and fire again. This will save you some time in post. Get rid of the rejects A.S.A.P. Aside from saving you the time from searching through hundreds of thumbnails to find a few winners, it will also give your computer a break. You upload time will be much faster. Rather than waiting for my mac to upload 300 large RAW files, I waited only a few seconds to upload 20 that I could then quickly find one or two to post.

To capture a nice sharp stream, I kept the flash power as low as possible. Lower flash pulse means a faster pulse and that means sharper photo. I set the flash manually at a power of 1/32nd of its full potential. 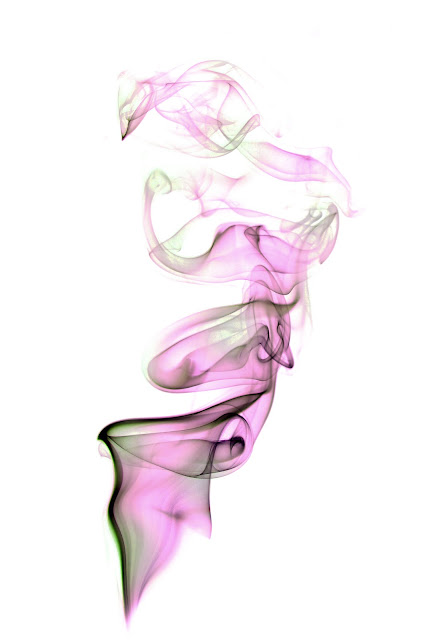 Editing a shot like this will take less technique that you would imagine. I will try to keep the explanation simple as well.

I did nothing more here than White Balance and Exposure corrections. From there it was onto Photoshop.

1. I go to Adjustments, choose Curves, and find true blacks, whites, and midtones with the appropriate droppers. That will remove any color casting.

2. To give a tiny bump in sharpness, I duplicate my layer, choose Filters, Other, High Pass. I'm around 80 pixels for this sized photo (12 megapixel). Layer Style is Vivid Light, with an opacity of 9%.

Now for the fun stuff.

3. Grab the eyedropper and click it over the BLACK background. Next choose a mid sized, soft brush (now defaulted to the color of the background), and paint over any unwanted smoke. Don't overdo it, just clean it up a bit.

4. Now that you have a nice image, you can save and exit, or take it to another level as I did here. A matter of taste. Go to Adjustments, once again, and choose Invert. A ha! Now that black background is white! The blueish smoke inverted as well. Very cool stuff.

5. To add some interesting color to the smoke, you can do some Color Replacement or as I did here. I added a Hue/Saturation layer with Layer mask. Played around with the sliders a bit, and then masked in different amounts of the new colors. I had to drag down the opacity a bit since I wanted the new colors to have a nice softness to them.

6. I saved the image and presto! Here it is. You're welcome world.

When you break it down to its bare bones, you can see that it is not really difficult to accomplish this. Once you get it down, the possibilities of what you can do with the smoke, in post, are endless. You just have to get daring. Don't be afraid to experiment in Photoshop. Some of the editing techniques I use today and everyday were ones I thought I would never be able to master. A little practice goes a long way.

Check out the smoke shot below. A little more involved in post, but very cool. Once again, get the basics down about shooting and lighting smoke and then go wild! 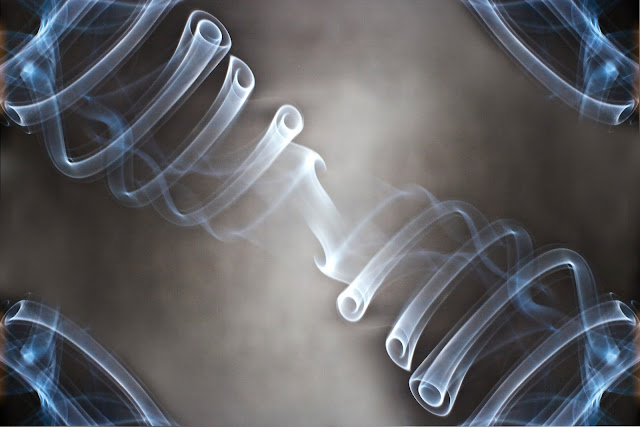 It has only been a few months since the blog has started and it has reached readers around the globe. I wanted to take this time to say Thank You to the readers in:


Have a good weekend, World.