glamour shoot (part 1) - how to light a subject wearing glasses

Today I will teach you how to light a subject who is either wearing sunglasses or prescription glasses. This can be difficult on many levels depending on the outcome you desire. Along the way of producing the awesome glamour shots that you will see later in the post, I ran into some other problems along the way. Read on.

The weekend was like any other. Had some relatives over to visit for lunch. All was peaceful and the day gorgeous, so we decided to go out for a picnic in the park. . .

There I go again, lying. Images of a simple happy Norman Rockwell life far from my reality.

In actuality, my weekend began Friday morning being in the hospital at 7a.m. My wife due in for surgery. Nothing major. We arrived at the Short Procedure Unit. Whomever named this part of this or any hospital for that matter, should be locked up and key thrown away, forever. The fact of the matter is that this unit is anything but short. Little did I know, I would sit around until 3p.m. waiting for the already promised 60 minute procedure to be completed. Sure, the procedure may have been short, but the name teases you into thinking you will be home before lunch. They don't seem to tell you the whole truth about the recovery time. Sitting in the waiting area, already on my third cup of black, hospital grade, free coffee, the surgeon came to discuss the results. Fantastic. He also assured me that she would be out of recovery in an hour. That was 11:30a.m. Did I mention that she was released at 3p.m.? Just checking.

I helped my wife to bed as the phone rang constantly from various family members and friends wanting to know all of the details of the day. Tired and cranky about telling the story like a broken record, I started shortening the story to something like this:

Rude? Most likely. I end up in bed early, since the weekend was going to be busy. I had signed up to be my wife's servant for the long weekend. How, you say? That was that whole, "in sickness and in health," thing, that we said at some event. Yep, today I'm forcing a nice wide smile as I help to pick wifey up from the toilet, as she does not have the strength to do so. Happy wife, happy life. Words to live by.

Saturday morning and the buzzer is ringing before noon. Someone showing up unannounced. It can be only one of a few people in my life that insist on the pop-in visit. My first guess was correct. My mother (along with my little sis). Oh, a day of joy, my wife is in pain and demanding each second some new thing that she needs, like ice cream. Now add mom, there to make sure I jump at wife's every need. I need an out. Fast.

I was quickly starting to feel like Clark Griswold in Christmas Vactation.

I had the perfect idea. Get wife and mom to talking, let mom know that I will do some glamour shots of her beautiful daughter. The plan was perfect. Everyone was distracted as I was able to go to another room with little sister (Morgan) and do a quick shoot.

Now on to business, the shoot, finally. I just had to vent a little. 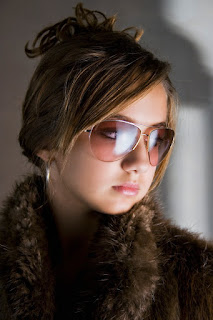 Here's one of the final photos. What do we see here? A nicely lit glamour shot, soft wrap around light, along with some large catchlights (in essence) in the sunglasses. This technique can be a little tricky.

Shooting a subject who is wearing glasses can be a disaster if you do not light properly. There are some tricks of the trade. Many think that the lenses are simply removed from the frames, in shots that you have no reflections. This is possible, but most likely, not the case. It's all about the light. I chose to have this trendier look of seeing some light in the glasses. I could have had none, it's just a matter of taste. Let me first tell you what not to do. If you decide to use on camera flash, you will have an awful result, the highlights in the glasses will be totally clipped (blown out) beyond repair. You need to get that strobe off camera. Next is how you position your subject in front of that light source. You want to angle the head either up or down and not looking directly at the camera. Think of billiards and how a player can bank the ball from a rail to go into a desired spot, the pocket. Our strobe is the ball, the sunglasses are the rail, and the camera lens is the pocket. In this game of pool, I don't want the ball to hit the pocket. By hitting the pocket, your result will again be clipping in the highlights. As I mentioned, I wanted the trendy look in the final shot. I want there to be some view of lights in the glasses but not so much to be blown out. To do this, going back to our 9 ball game, you want to bank the ball (flash) off of the glasses (rail), and overshooting the pocket (camera lens) only a slight amount. Now, if you want to avoid seeing any light source in the final result, you then take that cue ball again, but this time overshoot that pocket a great deal. Boy, I hope my metaphors are making sense or I will just feel dumb.

As I mentioned positioning of the glasses are what makes or breaks shot (pool pun). I first tried this shot with the model (sister Morgan) as is, but with the glasses lower on her face. I didn't like how that turned out, so I decided to raise them up. When I saw the correct amount of strobe in her glasses, I then continued to keep her at the perfect angle. Now I was able to fire off as many shots as knowing that my result would be consistent. 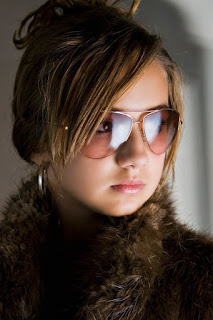 To sum it all up

Today, I only wanted to tell you the basics of how to light someone who may be wearing glasses. I would have wrote that today, I have to go, my wife just sneezed, I think I have to go wipe her nose. As for the usual technical details of the setup and how it was edited, stay tuned. I will give you the down and dirty of what really went down, tomorrow.

Since I you get to see the final result before I actually discuss how it was done, I'm giving a challenge.

The technique and skill of reverse engineering can be very difficult but if mastered, very useful. Study one of the two photos, closely. Try to figure out what was done. How was it lit? Where was the light(s)? What were the exposure settings? What was done in post?

By learning to reverse engineer this or any other photo, you can know exactly how another photographer mastered their shot. From that you can grow and hone your own skills.