suicide on the ben franklin bridge!!! 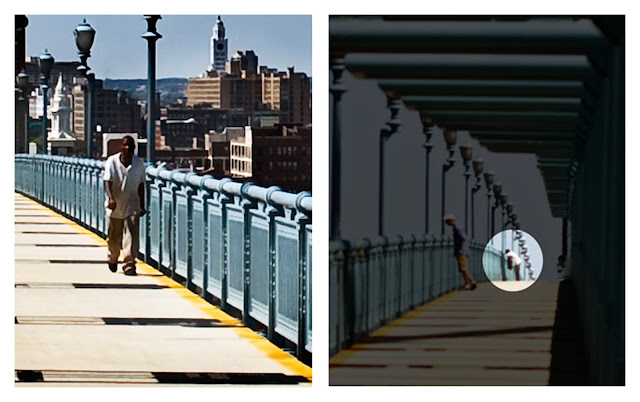 Let me start off by stating that the photo you see in this blog is by no means my usual awesome work but it sure does tell quite a story. And a story you shall receive.

Before getting into the story, a quick note on the shot seen here. Bad resolution and quality due to heavy cropping. Had I been using a telephoto lens, well, the results would have been much cleaner. Why didn't I shoot the subject with a long lens? Read on my friends, read on.

It was a nice August weekend in Philadelphia. As usual the wife had tasks for me to complete. Usually tasks that I'm not overly enthused to complete. That day's objective was to go to the local DMV to take care of some documents. The location of the closest DMV is located around 8th and Arch Sts, downtown Philadelphia, walking distance from home. From there its also a close stroll to the beautiful, historic Ben Franklin Bridge. This bridge also has a walking platform that allows pedestrians to walk, jog or bike from Philadelphia to New Jersey. Knowing that I would be close to the bridge I decided to pack up the camera gear before heading out to do my chores.

The DMV, no matter what city it is located, must be one of the most unhappy places to visit. I enter and the line is similar to one waiting to get onto Space Mountain at Disney World, only not as exciting. The elderly receptionist greets you with nothing. No hello, not even any eye contact. It was almost as if she were a robot, reciting the same rules to each person as they nervously pass one by one, hoping that they have all of the proper documentation for whatever they may be there for.

After what seemed like an eternity of standing in line, it is finally my turn. Coming as no shock to me, I didn't have everything I needed. I am then quickly ejected like a bad piece of food in a factory conveyor belt. REJECT. Slightly embarrassing as the others watch to see who makes the cut. My emotions were mixed though as I was relieved that I now had much more time to head over to the bridge to do some work. I B-line for the door and I was trapped, all exits roped off, forcing people to make their way through the herds and exit the other end of the building. I wanted out and wanted out now. I decided then to go under the ropes. My emotions quickly turn from slight embarrassment and relief to, Get Me The Hell Out Of Here!!! Due to having my large camera bag on my back, my jeans were slightly falling down, like a gangsta rapper. Well, while squatting under the ropes, the pants split down the rear end and the sound echoed through the wide open lobby. I then ran out as I heard a few chuckle. It was awful to say the least.

Once I made it outside, I was torn (mentally and physically) to wether or not I should plan on shooting another day. I decided to pull my shirt down as far as possible and march on.

I made it safely to the bridge without anyone noticing the large hole in my butt. Maybe they did but nobody said anything and that was good enough for me.

I've always wanted to do Ben Franklin Bridge photography. It is a very old and amazing work of construction. A symbol of Philadelphia and its many hardcore, hard working blue collar residents. There are many great shots of this bridge, but I wanted to make something different. Most of what people see hanging on walls are from the same angle. Shot from the Camden, New Jersey side, capturing the bridge and Center City skyline. On this day I wanted to go for something a little more abstract.

I start my hike up on the platform. From a distance, you don't realize what an uphill battle this can be. I headed for mid-span without taking a shot. All of my gear was its bag, on my back. Before being hasty about what I would shoot, I first wanted to take it all in. Basically, the goal on the way up was to scout out the area and do some brainstorming of what my main subject would be.

Approaching the first tower I realize how awesomely huge this blue monster is. It's difficult to describe in words. One of those, 'you have to see it to believe it,' moments. The views, just spectacular. At this time my mind has tons of ideas on what and how I should shoot the behemoth. Almost at mid-span, the gear is pulled out and prepped for putting the memory card to the test. I had emptied all images from the card before this shoot, knowing that I would load it up with lots of large RAW files. Yes, always shoot in RAW, no matter what (why?...for another post)!

Slightly winded, I finally am standing between Philadelphia and New Jersey, high above the Delaware river. The cap is removed from the Canon EF 16-35mm f/2.8 L II USM that I rented from my friends over at Calumet on Columbus Blvd. (Deleware Ave. for Philly Natives). I thought this would be the appropriate wide angle glass for what I had intended to shoot. I also packed my always trusty Canon EF 50mm f/1.4 USM (never leave home without it).

Though it was a beautiful day, the conditions were not ideal for photography. The sun was high in the sky and there was not a cloud in sight, anywhere. This was going to make my day very difficult. Personally, I would have preferred shooting at dusk or dawn, during golden hour, while the lamps on the bridge would still have been lit. I would have even loved it more if the sky were covered in dark ominous storm clouds. That would be perfect for a bridge landscape.

As I begin to shoot at low ISOs and high apertures, I notice this man (yes, the one in the photo) walking in my direction, staring at me. I knew right away that something was off, about him and the situation. He was an African-American gentleman (obviously), with slightly dirty attire. Dress slacks and a polo shirt seemed as if they came from The Salvation Army or a similar clothing donation. He then stopped at mid-span, very close to my location.

I continued to shoot and tried not to think of him but I still had this feeling as if he was watching me, and he was. My initial thought process told me that this guy may have noticed that the gear I was lugging around was not cheap. He was right, unsure of the exact count but I was hauling somewhere around $3000.00 worth of equipment. At that time the adrenaline is flowing through the veins. The fight or flight response, I was up there to make a great shot so I was not about to flee. Now that I my mind was focused on something other than photography, the work started to quickly suffer. I had to get my head straight. Focus. Calm down.

While trying to gain composure and focus on the task at hand, I kept an eye and some distance on the suspect.

A few minutes passed and I decided to check in on my new friend. WHAT THE F---K!!! He's Climbing up onto the rail (see second image)! This guy was preparing to jump! You can actually see him climbing up in the photo. Then, he saw me see him and got back down. At this point I don't know what to think.

Call the police? Well that could take too long. Talk to him? Don't want to make the situation worse. Do nothing? That could be a lifetime of regret if he jumps.

This is where my head was, totally confused. This went on for some time. It seemed as if he didn't want anyone to watch him jump. He only would begin his climb when there was nobody watching, as if he wanted to die alone. I tried to do a few shots and then look at him. This seemed to keep him from leaping.

I figured out how to keep him down, but wait, I couldn't stand there forever. At this point I may have been about 50 yards from the jumper. I then noticed another man (in foreground of second shot) possibly seeing what I saw. I decided to approach him. I asked if he was thinking what I was thinking. His response was not what I expected in hopes that I could have been wrong. He said: 'I've walked across this bridge hundreds of times and have never seen anything like this. This guy is going to jump!'

Now something had to be done. Time was running out as I could see the jumper really getting into a position to launch himself over the rail.

I asked the gentleman what he thought should be done and his thought process was identical to mine. He also didn't want to make the same mistake by trying to help the situation. At this point, realizing that I'm not crazy, I had to make a move.

I pulled out the iPhone and called 911. Told the operator that I thought there may be a jumper on the Ben Franklin Bridge. They then transferred me to the DRPA (Delaware River Port Authority) dispatcher. He then asked me detailed questions about the suspects description and location on the bridge. In a matter of two minutes while still on the phone with dispatch, they told me a Jeep would be arriving on scene, and there it was. I couldn't believe they responded so quickly. I pointed out the threat, they acknowledged and pursued the man in the vehicle.

The officers took no risks. I don't think the man even saw them coming. I thought they would try to talk him down. Maybe that's only in the movies. Quicker than a blink of an eye, he was cuffed and thrown in the passenger seat of the Wrangler. In seconds the officers disappeared into New Jersey. A few minutes passed and I noticed the vehicle headed back into Philly, on the platform. They stopped and thanked me for helping them stop a dangerous situation (the prisoner still staring at me).

Yes, I was proud of saving the day! I was upset that I didn't end up with the shots that I wanted but due to the lighting conditions, probably will be better off going back another time.

And for those with the twisted thinking like mine. Yes, part of me would have wanted to get the shot of him jumping. I saw dollar signs. But I couldn't sell my soul to the devil, not on that day anyway...

I was going to discuss how I created the photo but I think I've taken up enough of your time. There wasn't a whole lot done to it anyway. I don't want to let down the readers with the elementary editing that was done.

My first attempt at a photo shoot on the Ben Franklin Bridge, my first time ever walking on that bridge, and someone tries to jump! What luck! That's Murphy's Law for ya...