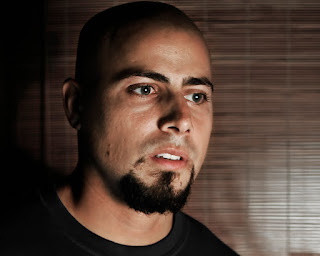 Today you will learn the photographer's ultimate secret, how to improvise, when you're broke!!! In today's economy it is difficult for many people to spend money on things other than bills. That doesn't mean certain projects must come to a halt. It just means you need to be creative, and find an alternate means to an end. Read on and it may surprise you to find out how I achieved this type of light.

It was just a few days ago, when good friend and aspiring photographer Steve Cardona payed me a visit. I wanted to show him how you do not need to be rich to create amazing photographs, just a little adventurous. I had everything ready to go but was missing one thing, the subject. I asked him to be the victim so that I could show him the results of this ridiculously cheap setup. Little did he know that his mug would be posted here for the world to see (before writing this, he approved of the post). Here's how everything played out. 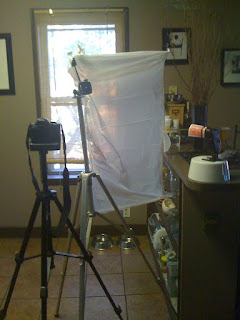 We were on location at, where else, my home studio. More specifically, in the kitchen. I wanted to have my subject in front of the window with the blinds down. I thought that with the backlight that would be provided and the texture that the blinds had, that this would make for a nice background for a simple headshot.

As for everything else, well the photo that I snapped with my iPhone will just have to speak for itself. I'll give you a second to take it all in. . . . . . . . . . . . . . finished? Before you start pulling your hair out trying to figure out what the hell this atrocity of a studio setup is, let me explain.

Again, the purpose of this setup is to shoot on a budget. It's also useful in case of some tragedy that you may have forgotten your light modifiers. The later may have caused that particular shoot to be that client's last shoot but I digress.

So what are we looking at in this photo? First you obviously see the camera on the tripod. Congrats to the geniuses who figured that out. You also can see the window and blinds with tons of light coming through (I'll explain the exposure process also). At camera right you can see a bowl from Crate and Barrel flipped upside down. On top of that bowl is the key light, 430EX ii. To avoid any flare hitting the lens, I used a very inexpensive barn door. Look closely, yes that is a joker from a deck of playing cards, attached to the strobe via rubber band. I hope you are doing the math so far. Grand total of mods has got to be close to a whopping nickel! Finally, that monster looking thing between the strobe and the window, yep, that's my diffuser, a soft box if you will, made from...a trash bag! Yes, I said it, a trash bag. I'm not sure what cardinal sins of photography that I may have broken but I'm sure I will straight to photographer hell for using it.

Grand total for light mods? I have no idea, but if you break it down, it's got to be less than 10 cents, depending on what brand of bag you have chosen.

Why would I use a trash bag? At the drawing board, I had no intentions of using trash bag. My intentions were to find something around the house that I would be able to use to demonstrate how to produce nice light with empty pockets.

The first modifier I was going to try out was going to be a white sheet. As I searched the house, I realized that I didn't own a white sheet. I was a little surprised by that revelation. I thought every home had at least one white sheet. Guess not. Next I tried to find a plain white shirt, thin enough to get enough light through without losing too much power. I did find one, but it was not large enough to produce the light that I wanted. About to give up, standing in the laundry room, I saw it, the yellow Glad box. I remembered an article that Strobist wrote over a year ago. He was doing a shoot on a lake and he needed a light modifier in a pinch. You guessed it, he had his assistant hold up a wonderful white trash bag. Beautiful light. I'm not sure how I remembered this specific article, but I did, and while still standing in the laundry room, reminiscing about that blog, I grabbed a white bag (black bags may not be as productive) and ran for the kitchen.

To set up the bag, I first cut down its sides so that I would be able to get more size out of it, as well as less light loss. I then attached one end to the top of a tripod and the other to a stem of a plant. Wait, did he say plant?! Yes I did indeed. I was having trouble finding something to tie the other end of the bag to, of proper height, for that matter. Standing on the bar top right in front of my face, some sort of twiggy plant thingy. Perfect. Since the bag was not too heavy, I would be the perfect stand for my new mod. As I have mentioned in previous posts, I setup like this only when my wife is not home. Again, if you are a married man such as myself, or married woman, spouses rarely approve of this type of behavior!

Now that I have this new improv light mod, I can turn that strobe's small source into a nice large light source, giving more wrap around light on the model's face.

Looking at the iPhone photo of this shots setup, you may notice plenty of available light coming through that window. Shooting with your cardboard disposable camera, or shooting in full auto for that matter would make this shot impossible, or awful for that matter. The result would be blown out light from the window and a silhouette of the subject. I took control of that ambient and made it nice and dark. From that darkness I then add light to the degree that I see fitting for that specific shoot.

Let's talk about exposure. As usual I try to keep my ISO nice and low to minimize the amount of noise in the end photo. I was able to shoot Steve at ISO 100. I kept the shutter at its sync speed of 1/200th of a second (you may divert from that setting for different situations). As for my aperture, I shot at f/2.8. Not quite wide open for the 50mm I was using. If had it wide open at f/1.4, the ambient from the window would have been overpowering. F/2.8 gave me just the right amount of darkness, depth of field and texture. As for the speedlight, I only wanted to light his face with little light spilling on the background. To achieve that, he had to be very close to that light modifier with the strobe firing at a low power. My shiny new trash bag was vertical on the y-axis and at 45 degrees on the x-axis. I only needed 1/32nd of flash power to get the amount of light that I desired.

I was very pleased with the results of this demonstrative shoot. I had to do very little editing in the end, which is always a nice treat. Sure I had to do some basic edits that I always do, but you can read older posts for the basics. Normally I would give you all of the editing specs but that was not my goal of this post. I wanted to show that with a little creative, outside of the box mentality, you can achieve what you may have thought was not previously possible. I will continue to find out new interesting ways of improvising on a budget. Any new trash like discoveries, I will be sure to share.

Thanks to Steve for being my guinea pig for this project.