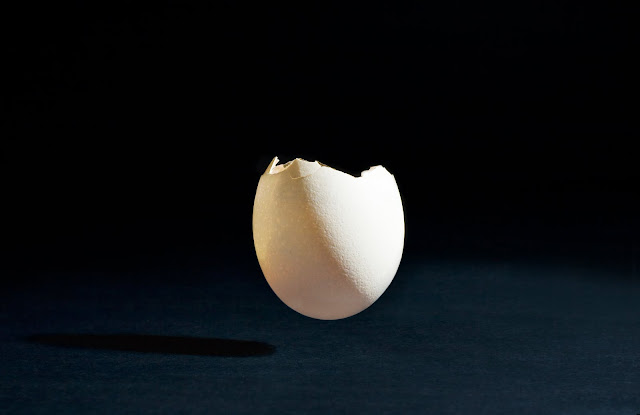 Today I will discuss how I created this abstract egg shot. Not only will I explain the initial setup but also the post processing work that was involved to make the subject appear as if it were floating in mid air.

I'm glad this little project is over. . .

I woke up last week th
inking of eggs and rather than just having an omelette, I decided to make life more interesting and more difficult on that Sunday morning, last week.

Yes, I needed to do a interesting shot of an egg. This little sphere of goodness was one of the more difficult shots that I've done recently. Why? Well, think of it. How interesting can one make this plain white object? That's
where you must get the creative juices flowing.

The final shot here, after hours of trial and error shots, ended up being my favorite (obvious statement since photo is posted here today). I think it has sort of an M.C. Escher feel to it. My wife disagreed (what else is new). 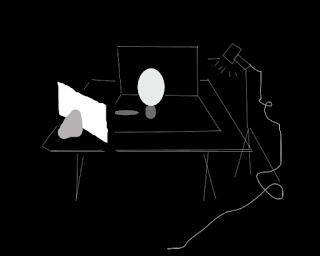 After deciding that an egg was
going to be my subject for shooting this day, I then needed to decide how to go about it. Let me
say that I had no clue! I was unsure if any of the ideas would work at all.

You can see the actual setup from my beautiful drawing (not to scale). Hey, it's not as easy as you may think, trying to draw freehand in Photoshop. The egg was sitting on a plastic cylinder which was sitting on a black piece of poster board. The background was the same, black poster board. The light was a Canon 430EX ii Speedlite flash. I had this on a light stand directly to the right of the egg and firing down at a 45 degree angle. I shot this without any light modifiers. Why? I wanted the light to be hard while at the same time getting all of the textures and depth from the shell. To obtain a nice exposure I like to get the ambient underexposed by about three or more stops (Joe McNally style). It's at that point, in the dark, that I can create unique and interesting light. At this close distance without any mods, I was able to dial the flash down to 1/64th power while keeping my camera settings very sharp as I did not want any signs of shallow depth of field. At this light power I was able to get a clean exposure at ISO 100, shutter speed at 1/200th and a aperture of f/11. The lens of choice, what else, but the trusty Canon EF 50mm f/1.4 USM. Getting the light off camera was done courtesy of LumoPro's Universal Translator linked by a 25 foot, 1/8th inch miniphone cord. This is a wonderful, dependable and inexpensive setup for those on a budget.

Okay, maybe I lied just a tad. There was one simple light modifier to the left of the subject. I had a white poster board to fill the shadows on the shell just a tiny tiny bit, barely noticeable. I'm not sure if it counts but I don't want any OCD shooters like myself to start a war of technicalities.

At this point I had everything dialed in for just the right amount of light. Here's where the problems came in. Initially I had not intended to have a floating egg. I began shooting from above, capturing the yolk. It was going to be very minimalist. The results were just that, minimal. Nothing was really jumping out at me. I kept firing away, adjusting the light a bit, playing with different exposures, getting very angry. As I was about to give up, and then lowered the camera to the front of the egg. There it was! I felt as if I had just found the Holy Grail, and Tom Hanks was MY assistant. Yes the idea hit me then and there. I knew now what this egg was put on earth to do. I looked at the LCD and confirmed to myself that I had a totally new plan for this chicken that would never be (sorry vegans, couldn't resist). I then fired off a few more just to make sure I had something that I would be absolutely thrilled to edit.

This is where things get even more complicated. I don't like to overkill in Camera RAW, Photoshop or Lightroom unless that particular piece of work calls for it. I usually keep to the basics that I've mentioned in previous posts. And trust me on trying to keep it simple or you can ruin a perfectly good photo. Many of the techniques and tricks out there are trendy and will not stand the test of time. Again there are times that a job may call for trendy, but be cautious. Remember Sepia? That's what I thought. Sepia died a painful death although there are a couple photographers I've seen use it in a new unique way. As long as you don't overdo that or anything else for that matter, you should be on the safe side. K.I.S.S. = Keep It Simple Stupid.

As with any photo, I did my usual edits. In Camera RAW I adjust temperature, exposure, and some sharpening. Then its over to Photoshop. After completing the fundamentals like Curves, Color Correction, etc. I had to buckle down and focus on the task at hand. Make that egg float.

Here's where you want to utilize tools like the Clone Stamp and the Healing Brush although the later is used more sparingly due to the limits of its abilities. Using the cloning tool, I sampled parts of the foreground to remove the plastic cylinder that the subject was sitting on. I had to also even out the shadow using the same technique, since they cylinder also cast a shadow from the flash. Next, the hard part. Using the same technique but on a smaller scale, I had to recreate the bottom of the egg that was hidden by the stand. To accomplish this, I viewed the subject at 200%, this way I would be able to see actual pixels to be sure I was keeping the right light and textures where I was cloning. It was not right on the first try, or the tenth, but with patience wearing thin, I finally got it. The easiest way to explain using the clone tool is as follows:

Ok, I made that sound slightly easier than it really is, but that is the basis for it. You can tweak many different aspects of cloning such as, brush size, opacity, flow, etc. I recommend experimenting until you get the hang of it. I also recommend using layers and layer masks with all of your editing. Using layers/masks enables you to go back and modify any adjustment at anytime. If you decide you didn't like one aspect of editing that you did after another adjustment, you can then go back and do some more tweaking. Without layers/masks, you make the edit, and that's it. You better like it the first time, there's no going back.

Yes, I was happy with the final shot, enough to post and blog about the experience. Looking back on that day, rather than figure out how to make an egg interesting, I would have put a few in my belly, with a side of crispy, delicious scrapple and a large glass of O.J. Yes, that would have been much easier. Rewarding as this shot, no, but easy, yes!

To make peace with all of the vegetarians and vegans that I may have offended today, I will soon do a post on how to make tofu interesting. . .