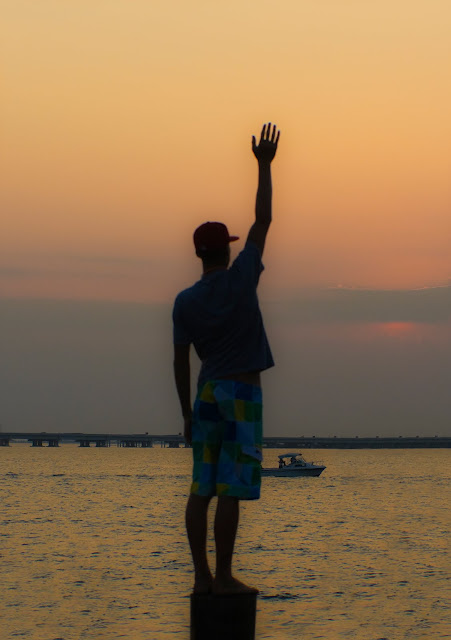 Hello and welcome back. Last week I went on a long overdue and much too short, vacation. Where to? Beautiful Ocean City, New Jersey for the famous Nights in Venice boat parade.

At dusk the parade begins in the bay on the north end of the island and works its way to the bottom of the bay. A parade of uniquely decorated boats, everything from gigantic yachts to a tiny motorized dock sample (hilarious). There was even a Jon and Kate Plus 8 boat, sans Jon and the kids. Now it was getting dark and from my view I could have sworn that it was really Kate on that boat.

At an event such as this there are hundreds of spectators along with an equal number of cameras. Now here is the time that you must stray from the herd and get your creative thinking cap on. As a photographer you want to find that unique shot that most hobbyists will miss. Easy to miss at an event like this. Most of those cameras are pointed at the same thing, the boats. Sure you can find a nice shot in there somewhere, but I want to be sure that mine is that one that stands out from the rest. I decide to focus my attention away from the parade and focus on the spectators instead. If I had been doing a shoot that focused on the parade then, sure, I'd be aiming for an interesting shot on the water. But I wasn't, I was looking for something unique to write about when the vacation ended.

Now that I've decided to relocate, I had to scout out the area to get my angle. Many people were at the end of the docks to get the closest view of the show, so I fell back about halfway between them and land. From this vantage point I could start some quick brainstorming of how and who I want to shoot. And there he was, the mark, standing on top of a bulkhead. I'm not one for many candid shots but this one I had a feeling was going to work out just fine. I'm more used to having my shots pre-planned. The sun was at just the right level during Golden Hour, a time when the sky's ambient light is perfect for natural lit photography. This time is just after dawn and just before dusk. I contemplated using a speedlight to fill the subject since I exposed for the sky and not the man. This makes the subject underexposed by a few stops. I realized that this effect would be cooler than had he been filled by the flash.

Now the subject was waving as the first of the boats started making their way down the lagoon. I wanted to get this shot before the parade started to obstruct the frame I was going for. I started to feel as if he were a stranded person waving for help. This was going to be the look I was going for. There is one boat in the distance that worked out perfectly. It was as if he was waving to him to save him from his wreckage. If any of the parade boats came into view, this feel would have been lost.

Now for the technicals of the situation. I was shooting with my trusty Canon 50mm f/1.4 lens. A wonderful prime lens, (of course we will get to those specifics in future articles) that I never leave home without. I popped a few exposures just a few minutes before to get my settings down. This way I would have one less thing to think about when trying to get the perfect frame. I was in full manual mode with my ISO at 100, shutter speed 1/1000 and aperture of f/4.5. After getting that I went over to my White Balance adjustments and found that choosing Daylight worked out nicely. I don't stress over that too much since I always shoot in RAW. This is your digital negative that you can manipulate later in post with no harmful side effects. Once I was all set, I went into continuous shooting mode so that I would be able to fire off a few shots in a short period of time. I believe mine gets around 4 frames per second (fps). It didn't take many to know I had the right one just about a minute after shooting.

Next was to edit the final shot. I upload the RAW images to my mac and view the thumbnails in Adobe Bridge. Here I choose my favorite of the bunch. After seeing the one I like, it is now opened in Camera RAW to do some edits before doing the final goodies in Photoshop.

In RAW I mentioned in the first post that there are only a few adjustments that I usually work with there. There are plenty to use, but most of those I like to do in Photoshop (personal preference I guess). First I warmed up the temperature a bit. Then, I played around with the exposure a bit to get the perfect feel. After that, I like to do some clarity adjustments. On this photo I took it down from zero. I usually bump up the clarity, but not for this one. That glowing sky needed to be complimented with a soft feel overall. I took it down to around -50, giving a nice dreamlike effect to the image. It could also be interpreted as a light fogginess in the scene. Next, I bump up the vibrance to 30. Anything more would be too much and any less would be too little (that was an obvious statement, I know). Now our RAW editing is complete, over to Photoshop for the finishing touches.

Okay, now our photo is almost complete. I actually didn't work with many adjustments as usual in Photoshop for this particular shot. I was already happy with how it came straight from camera, for the most part. In RAW, had the shot almost dialed in to perfect. So what did I need to do in Photoshop? In actuality, our stranded beach goer was not alone in the scene. By his feet there were some other people in view. How to solve this? Well there are a few ways to remove them. Cloning, Bandaid, Cropping, etc. Basically the more comfortable with Photoshop that you are, the more ways you will discover that you can achieve the same result of a task by using different techniques. For this particular photo, I had to crop about an inch off of the bottom to get close to what I needed, which was no other people in the scene. Since the problem were mostly just heads in the bottom of the image, the fix was easy. I couldn't crop them too much or the piling that our subject was standing on would have seemed too short. Now that most of the heads are gone, I grab the clone tool, take a sample of the water, use a soft brush and paint their annoying heads away. Now they sleep with the fishes! The subject all alone hoping that the boat in the distance sees his wave for help.

And that is all for that one. Saved the image as a .jpg and now it is here for you to enjoy. So, enjoy. That's all I have time for now. Until next time...